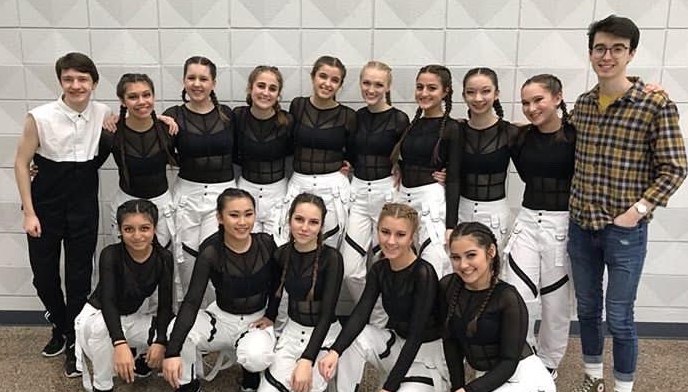 The December Holiday Tea with the Select Women’s Ensemble featured the West Ottawa Varsity and Junior Varsity Dance teams and their performance of The Little Drummer Boy. The team entered the stage with graceful jumps and leaps, captivating the crowd’s attention. This is not the same dance team you would have seen five years ago. At the center of this team are two students breaking barriers and social norms to do what they enjoy most.

While society has created the stereotype that dance is a female sport, Sr. Jonathan McCabe and Jr. Kyle Magennis are proving dance is a sport for all.

McCabe has been  part of the varsity dance team at WO for three years. He began dancing at the age of two while watching The Wiggles.

Dancing runs in Magennis’ family as his sister was a part of the dance team when she was in high school. He has been a team member for two years and began dancing when he was seven at Avalon School of Arts.

Being a male in a female-dominated sport brings its struggles. While dance is physically demanding requiring strength, training, coordination, and flexibility, the biggest obstacles are not physical but mental. McCabe and Magennis both agreed that the comments and reactions from others have made it hard for them to continue. Magennis said, “The judgment is there if you’re a guy. There are some physical aspects I find difficult, but the hardest parts are mostly just the acceptance of other people, and a lot of people just don’t accept that guys can dance.”

Another hurdle they face is being proud of their talents while fighting these stereotypes. McCabe said, “People think being a dancer is cool when you’re a girl, but for guys, it’s a different reaction. It took me some time to proudly say I’m a dancer and not care what other people thought because you never know what their reaction will be.”

They both agree that their greatest difficulty is being confident enough to showcase their talents. McCabe said, “My biggest obstacle is getting out there and performing in front of all of those people.” Magennis backed up this belief saying, “My biggest emotional obstacle is going out there saying this is what I’ve done and what I can do and I do it because I love it.”

While being a male dancer comes with its difficulties, McCabe and Magennis continue dancing. Even through obstacles, they both know they have their teammates by their sides.

McCabe said, “There is a lot more acceptance within the team than most think. There is not really ever any mal intent.”

No accomplishment has been greater for them than simply being part of the team and being accepted. McCabe said,  “I’m proud to just be on the team in the first place and being a part of it.”

Magennis also said, “My biggest accomplishment has been feeling accepted on the team. My first year, I worried people would see me as my sister and expected me to be just like her, but more annoying. I feel now like I truly am accepted as my own person by my teammates.”

McCabe is thankful for the relationships he’s been able to form with his teammates. McCabe said, “People would be surprised by the relationships you make. As a guy, you’re sometimes excluded from those girl friendships, but when you’re surrounded by 14 girls you make those connections.”

McCabe and Magennis bring something special to their team. Teammate Jenna Galien said, “Jon is actually a captain on the dance team, and he’s so great because of his positivity and talent. Kyle is funny and smart. He’s the one that brings logic into the whole thing and is really good at fundraising for costumes! He gets the dance team recognized.”

Teammate Miranda Garcia added, “They bring so much laughter and tons of smiles to the team.” Not only do their personalities bring the team’s energy up, but their physical abilities also enhance the team’s success. Garcia said. “They both have different skills to offer such as jumps, turns, leaps and more.”

Galien seconded this saying, “With them on the team, we can do advanced lifts and partnering. They also both help with choreography. Having two boys also helps with symmetry to the audience.”

McCabe and Magennis’ love for dance is evident. Their dedication to the sport and their teammates even through adversity is an example of their resilience. Magennis said, “Dance is awesome. You can use it to express yourself in a million different ways and you can flow your emotions through the music.” When asked how they continue to dance through judgment, they both said, “We just ignore them.” They both believe, “If you love something, don’t let anyone’s opinion change your mind. No matter what people or society say, do what you love.”