No longer waiting in the wings 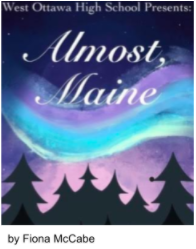 “It takes a great deal to stand alone,” Marissa Cole spoke to Connor Short as the eighth juror.

Short, playing as the third juror, looks around the silent room at his co-actors before his face contorts as if to cry. He slams his fist on the table as he delivers the last line in the play.

The verdict of not guilty is decided and all the jurors leave until Cole is the only person left on stage. She looks out onto the darkened room, where she has spent the last hour or two before walking through and closing the door. The lights fade on the stage with the empty tables and chairs. The audience in the house is silent. No one dares to be the first one to clap until the lights on stage illuminate the room to reveal the actors walking back onto the stage for the curtain call. The actors and crew smile from ear to ear as they experience the rush of finishing the play. With such bright expressions, who knew that Twelve Angry Jurors would be the last theatre production of the 2019-2020 school year?

“When we were quarantined last year, I don’t think anyone expected the situation to last this long. When we came into this school year with no real end in sight, of course, I was concerned for how limited all of my extracurriculars would be. I haven’t been in WO theatre for long, so it was especially discouraging to realize I might miss a whole year,” Jr. Jane Hoppe said.

Like Hoppe, many didn’t think that the high school’s theatre program would have a production. Especially after the middle schools didn’t have their annual musical, despite the high school having their full season.

To Sr. Renee Kinsler, “When everything got shut down last year, I just felt so bad for the middle schoolers in the spring musical that had worked so hard up to that point.” Although never performing the musical Guys and Dolls, the middle schoolers had understood the situation that we were all in at the time and swallowed their pride as they had to give up their musical.

The very notion of doing a play for the high school was talked about during Drama club, but when the club was shut down due to COVID-19 risks, even more people were disheartened, and the very thought of theatre opening back up faded. But even with these setbacks, high school theatre is still going and is now working on Almost, Maine, a play with 8 short scenes, each dealing with various aspects of love. Almost, Maine was practically a miracle to all the theatre kids.

“My thoughts varied in many different directions. Most of which was discouragement, but with that discouragement came the hope that even in the circumstance that we all were facing theater was still possible and I mean, the show must go on right. Even if that does mean it may look different,” Frosh. Grace Cronkright said when she first started the school year. When she heard we would do a play she “was absolutely ecstatic! This was an opportunity to do something I really enjoyed and after a whole year of not doing it, I was very happy to jump back in and help in any way I could.”

“I missed theater a lot. Even though I’ve never been a big part of shows before, it was still disheartening thinking we wouldn’t do anything,” another student said before expressing how much faith they had in the school’s theater program to follow the guidelines. To those involved with theatre, the play has been a saving grace for them, a light in the darkness, despite the drastic changes necessary for the production.

“It’s student-run! Students are in charge of costumes, props, makeup, and even directing scenes,” said Sr. Anna VanKampen. Despite the many setbacks that COVID-19 had made for the high school’s theatre program, students are taking the lead for the play and even taking roles that were specifically for Instructor Joe Huber and other adults. “I think it’s great how our production staff took the tough situation we’ve been given by the world and created a learning opportunity from it.”

The truth of the statement above is easily seen throughout rehearsals in the middle school PAC. Since in-person schooling resumed on January 4, there were around 12-16 students (3-4 scenes) in the PAC every school day.

Although students were allowed to help with aspects like costumes and makeup, this year has been the only moment when students were in charge of picking the costumes and figuring out makeup rather than just following the directions given to them. And because of COVID-19 restrictions, some actors are using and putting makeup on themselves for the first time.

The roles of directors were to replace instructor Huber’s role as director. He has tried to be as hands-off as possible for the play so that the students can work as freely and independently as possible. Working with both the actors and crew of the play, they create a safe, energetic environment that follows COVID-19 guidelines. The aspect of teamwork in the play is crucial within the production of Almost, Maine because they all know the implications of being quarantined during the production, especially Jr. Carlos Marroquin-Lozada.

“I hated being home. It was pretty hard trying to figure out blocking and trying to discuss playwright notations with my actors in the scene I directed, which kinda put stress on me since I didn’t know what to do,” he said. Marroquin-Lozada’s task of acting was also a struggle for him to do, especially when his scene didn’t cast an understudy for him as many of the others. Figuring out blocking to act for him had a multitude of difficulties piled on like not being able to know where his co-actor would be in relation to him. For the actors and the directors, having someone in their scene being in quarantine was a laborious challenge that they had conquered.

“I’m proud of everyone who was involved, especially the seniors. They put in a large effort for a rather unorthodox last show, and it’s certainly not gone unnoticed,” said one of the many students involved with the play. Unlike how VanKampen joked at the beginning of the year, Twelve Angry Jurors won’t be the last high school production that the 2021 graduating class would have to participate in.

Almost, Maine is the astonishing demonstration of a group of young students taking initiative during a challenging era and making the time their own. Each student involved had their own uphill battle, and each found ways to overcome them. The students aren’t even just proud of themselves, but with each other too. All these students would want people to do is watch the play with their family. The play means so much to them as for some this play is their last, to some others, the first high school production of many.

The live streams are:

The tickets are $5 per device. (You can watch on one device for the whole family.)