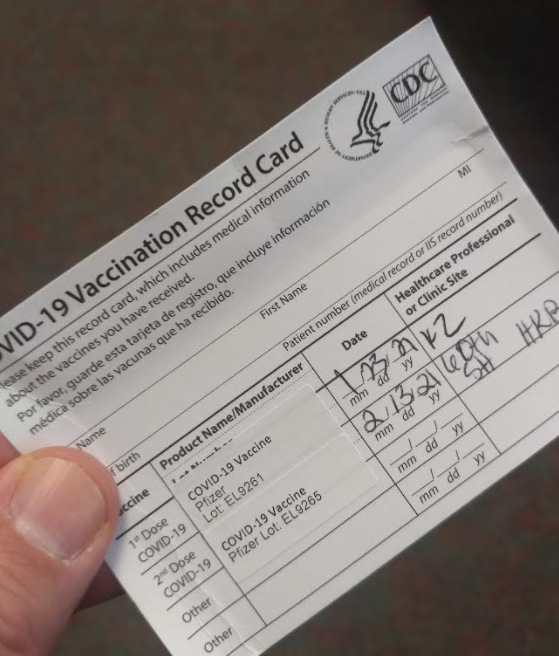 One by one, patients walked into the Spectrum Health building on 60th Street in Grand Rapids. Most carried in their hands a small white card that said “COVID-19 Vaccination Record Card.”

On Saturday, several West Ottawa High School teachers were among this group getting their second Pfizer vaccine. Recently, the Ottawa County Health Department was able to open up access to administer 25% of available vaccines to K-12 education staff.  Several counties, including Kent County, had vaccines available sooner.

Three weeks ago, Kenowa Hills Instructor Dave Bentley finally found open slots to get the vaccine and notified his wife, West Ottawa Instructor Kristen Bentley, to sign up as well. In turn, she was able to encourage staff members at WO to sign up for the vaccine.

To increase the efficacy of the Pfizer vaccine from 52 percent to 95 percent, a second dosage is required. West Ottawa teachers described their experience with the second vaccine dose.

Instructor Cathy Engel mentioned that the staff at the vaccine administration site handed her a card with a number to text to check in. Once she checked in, they quickly replied that they were ready for her. “This was much faster than the previous vaccine. Once inside, they took my temperature, gave me some hand sanitizer, and sent me into the line for my vaccine. Once in line, I was asked to fill out some paperwork, then check in with a nurse. After that, they guided me to my vaccine.”

Engel handed the nurse her CDC vaccination card. Once the nurse filled her card out, she was able to get her second shot. Afterward, she was directed to the waiting room for 15 minutes to monitor for any reactions. “It was very fast. I felt great before, and my arm was a bit sore after. Other than that, I was just grateful to be fully vaccinated.”

Compared to the first shot, several WOHS teachers described how different the experience was. Instructor Ken Strobel said, “The parking lot was half full. Last time it was full and patients had to drive around looking for someone vacating a spot. The line was virtually nonexistent. It took about four minutes from walking in the door to sitting down for the shot.”

Those that received the second shot described few symptoms. Instructor Kristen Bentley mentioned only being sore after getting the shot, but no serious side effects.

Instructor Brian Taylor said, “The one main difference is that I started experiencing pain the first minute after this dose. I was checking the West Ottawa social media feeds and noticed the competitive cheer meet was streaming on Facebook, just as I started to feel pain. The injection site is much more sore than the first dose; painful to lift my arm, and I had difficulty sleeping as a result.”

Despite these side effects, Engel explained the importance of getting the vaccine: “A lot of things motivated me to get vaccinated, I wanted to do my part for the general population, for my parents who are both high risk, to one day soon return to some normalcy for myself and my students- to teach without a mask, put on homecoming, and see my students perform and compete in their various activities and sports.”

Overall, the teachers who got the vaccine described a sense of gratitude. Engel said, “I am extremely grateful to have gotten the vaccine. I am so grateful to the scientists that put in so much work to make this happen.”