Ben and Brady vs. WO: Swimming 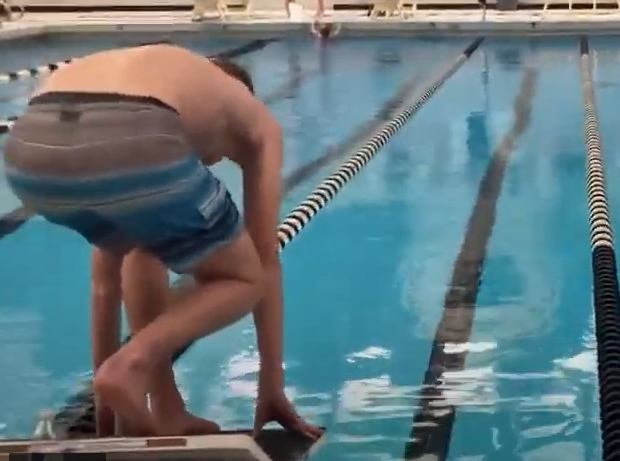 Startled by the hair-raising cold water, I regained my composure and realized that split second had already put me in my competitor’s wake. It was all a catchup game from that point on, and judging by the growing distance between the two of us, it was a lost cause.

In the final edition of Ben and Brady vs. WO, we decided to test our abilities in the water. Bosma’s brother happens to be the diving coach, so he got us in touch with Varsity Swim Coach Steve Bowyer to set up a race.

Going into the competition, we didn’t expect much, per usual. Riley swam throughout elementary, and peaked in his swim career on the middle school team. Bosma has no competitive swimming experience, but he is able to stay afloat with minimal struggle.

Upon arrival at the pool, we were greeted by our competitor, Sr. Josh Rottier wearing nothing but a Speedo. We agreed to have a couple of minutes to warm up, where we would also time our 50-meter freestyle and backstroke. Then, one of us would race against Rottier in a head to head 50-meter freestyle.

We jumped into our separate lanes and got a quick warmup in. After one lap, we knew it was going to be tougher than we originally thought. “Wow, that was actually really long,” Bosma said. Riley agreed.

After a couple minutes of swimming and some cool down time, we swam for time.

We lined up on our starting blocks, and Coach Bosma started our countdown. “Take your mark, Go!”. We dove in and started our furious strokes to get to the other side. Hearts pounding and arms flying, we splashed our way to the halfway point.

As we approached the wall, Bosma trailing Riley, we each realized we had very little instruction on how to do a flip turn. Instead of tucking our heads down, executing a flip, pushing off the wall, and rolling over to our front sides, we each opted for a much less graceful method to turn around.

With the solid brick wall approaching rapidly, Riley had to figure out in a matter of split seconds the best way to turn around, or risk blowing a 10-second lead on Bosma. Riley mistimed his maneuver considerably early.  After flipping around, he reached his feet to push off the wall, only to push off of water. He frantically paddled back, reaching his legs to the wall once more, and this time connecting. Meanwhile, Bosma was gaining. He saw how much Riley struggled, and simply reached for the wall, brought his legs beneath him, and pushed off.

What time Bosma saved with his flip turn, Riley more than accounted for on the home stretch, and it wasn’t even close. Riley led the whole race, and despite Bosma’s best effort, the quick turnaround was not enough.

It was obvious to those watching we were both fatigued, as we progressively slowed after the halfway point. Reaching for the wall, we both gasped for air. Our arms burned and our lungs screamed for air as we fought to pull ourselves out of the pool. We dreaded hearing our times. “Ben, your 50 time was 34.67 seconds. Brady, your 50 time was 44.27 seconds” Coach Bosma said.

As we took a quick second to recover before our backstroke,  Bowyer broke us the news. “Ben, your time would not have made the cut for the A meet for 10 year olds.”  I thought he was kidding, but the concerned look on his face said otherwise.

We were shocked and deflated, yet amazed. I was swimming as hard as I could, yet a kid half my size would easily best me.

We took a brief rest, which mainly consisted of us standing and shivering while we oversaw the swimmers slicing through the water efficiently. It was scary how fast they were moving.

Next came the backstroke. All thoughts aside, we needed to focus not only on this time trial, but our final test. That’s difficult to do when a lot of the muscles that aren’t usually exercised burn.

Already drying out, we were less than thrilled to slide back into the pool as the rush of brisk water overcame us.

Backstroke was much more of the same, the surprise being that Riley’s backstroke time of 46.06 would have just narrowly lost to Bosma’s freestyle.

After just 100 yards total of swimming, Bosma decided he was not physically able to compete in the race. Riley was also drained, but since he was our best chance to win, he was forced to compete. Keep in mind that in practice, some athletes swim over 5000 yards, and we barely finished 2% of a normal workout.

Rottier was already waiting for Riley atop of the starting block.  Riley fumbled to get his goggles over my his and stepped up on the block, bracing for the signal.

“Take your mark…” a voice said, drawing out the last syllable.

“Go!” My vision focused to a narrow circle, everything outside it a blur. The adrenaline kicked in long before the start of the race, and it felt as if nothing else in the world had any importance.

Every four or so strokes, Riley tilted his head to the side to breathe, each time one of two things happening. Either he would start to swim crooked and have to overcorrect, or his nose wouldn’t be plugged correctly and water would rush into his sinuses.

If Riley wasn’t already swimming slow enough, those two factors would hinder his progress even further. The only point of the race anymore was to make it halfway before Rottier finished. Thankfully, that embarrassment never happened. Riley eventually cruised into the wall with a blazing time of 34.98. “Dude, I’m sorry, but I think I just swam a personal record, a 22.3,” Rottier said.

Deflated, we headed our separate ways with a new respect for the sport. This has sadly concluded the Ben and Brady Vs. WO series. Special thanks to everyone who competed against us (if you could call them competitions). It was a good time.