“Cancer does not stop, so neither should we.” 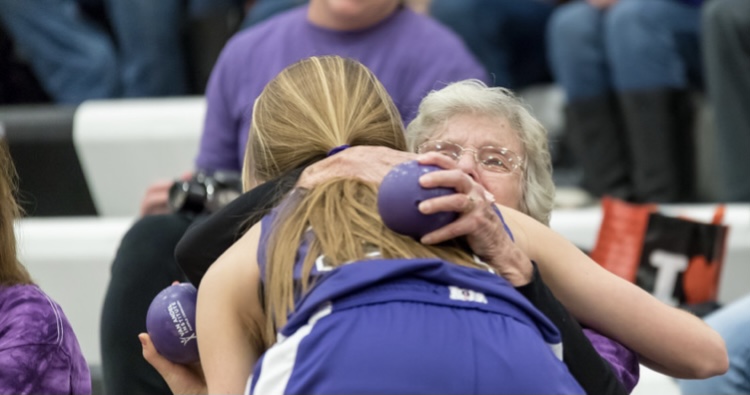 As the words of the national anthem and music faded away, my basketball team and I headed to our bench. If this was any other game, I’d sit down and wait for the announcement of my name. But this was not just any other game. I wasn’t waiting for my name to be called. This basketball game wasn’t about me. It was about her.

I looked into the stands and as my eyes met hers, and I was immediately fighting off tears. The bustling of hundreds of people in the gymnasium was suddenly tunneled out. I heard the name on the back of my shirt announced. I grabbed the purple ball out of the bag in front of our bench.

In any other context, this small purple ball might appear as nothing more than a toy. But as I jogged towards my grandma and handed her the ball, her face revealed the value of this moment. The ball symbolized the support I was giving her. I wrapped my arms around her and she whispered the words, “Thank you.”

Joan Karner, my grandma, is one of the many cancer survivors that West Ottawa Purple Power has honored at a basketball game. West Ottawa has been involved with Van Andel Institute’s Purple Community fundraiser since 2013 and holds seven different sports games each year.

Established in 2009, the Purple Community extends statewide, including over 120 schools. Throughout the past 12 years, Purple Community events have raised over $4 million dollars for cancer research and awareness.

West Ottawa significantly influences this number, with a goal to reach a total of $250,000 by the end of the school year. To put this number in perspective, West Ottawa will have raised 6.25% of The Van Andel Foundation’s total proceeds. One school district is responsible for raising 6.25% of a statewide fundraiser. The WO Purple Community is proud of these numbers.

However, sitting on the black and white pull out bleachers, surrounded by hundreds of purple shirts, one would know Purple Power at West Ottawa is about far more than the numbers. Whether a player on the court, a cancer survivor, or a spectator, the vulnerable feelings of sadness and hope intertwine and touch each person at every level of the gymnasium.

On the court level, the athletes compete with a unique type of energy knowing the person on the back of their jersey is watching. Even if they are watching from above.

Varsity basketball player Grace Pedersen plays for her grandma, Gloria Stoll, who died of breast cancer when she was 1 year old. Pedersen said, “During the Purple Power game, it means a lot more how I play than most games because I feel like my grandma is watching me. I want to make her proud because she has never been to one of my games so that game is all dedicated to her.”

Varsity basketball player Kegan Garcia expresses these games are important to him because “it is a chance to play for more than just yourself. You are representing the name on your jersey, so it goes beyond basketball.”

In the stands, the power of purple hits cancer survivors with a wave of much-needed support. Cancer survivor Andrew Linn and his wife, Megan Linn said, “Our friends sponsored last year’s basketball event for us. We were in awe at the number of families affected by cancer and truly felt an enormous amount of community support. It made us feel like we weren’t alone and showed our children that other families are going through the same issues as well.”

WO Purple Power supports those fighting cancer of all ages including 13-year-old student Graham Hoekstra. Hoekstra has been fighting brain cancer since the age of three but is energized when talking about the Purple Power game. Hoekstra fondly recalls sitting in the stands and feeling proud as two high school boys he looks up to wear his name on their jersey. WO Purple Power “gives us a special night to shine,” Hoekstra said.

The families in the stands who have lost a loved one to cancer express that Purple Power holds a special place in their hearts. Sr. Nixen Ly is among many of the students at WO who this event has directly affected. Ly’s father was diagnosed with a rare type of cancer and battled it for about four years before passing away three days after Christmas in 2017.

Ly said, “The Purple Power game was where my family and I realized how much the WO staff cared about their students. Mac Bay and Lakewood Elementary each sponsored a jersey for my dad. This event is a place for my family and me to remember and honor my dad.”

As much as these events are about raising money and cancer awareness, their intangible significance is felt by every family that has lost someone to cancer.

“Purple Power is a very emotional event, and I remember feeling all kinds of emotions. One second you’re happy and the next you’re starting to choke up with tears. At these games, your heart just feels fragile,” Ly said.

Elementary Instructor Diane Colvin is one of the people working behind the scenes to provide a community of support for each fragile heart that has lost someone to cancer. Colvin knows the value of Purple Power games because she has lost one to cancer herself. Colvin organizes these events and raises money for research in hopes that no one else would have to lose a loved one to cancer.

“It is too late for my mom, but it is not too late for someone else’s mom, sister, uncle, or cousin. The most important part of these events for me has always been the people we are honoring. Listening to the names being announced, reading their stories always makes me cry. Hearing the stories of survivors reassures me that we are making a difference,” said Colvin.

Purple Power at WO is truly something special according to McKenzie Hollern, the Event and Volunteer Coordinator at Van Andel Institute. “I am in charge of all our school partnerships, but this has to be one of my favorites because it is so unique. To have a whole school district come together for a whole school year is just amazing! And what is even more special is that the West Ottawa community NEVER loses sight of what this event is all about. Spreading 100% HOPE!”

This year, with the COVID-19 pandemic pushing back sports seasons and dictating allowed numbers of spectators, Purple Power might not be possible or at least not the same. WO Purple Power typically generates the largest crowd of spectators all season. Families come together from across the state. WO teachers are all there in support. Elementary school students arrive in purple shirts, purple bracelets, and face paint. The word community could not be illustrated any better than in West Ottawa’s gymnasium.

However, this large gathering cannot happen with the COVID-19 restrictions, which is a hard pill for many to swallow.

Pederson said, “The thought and possibility of not having a Purple Power game this year is devastating. Spreading awareness and getting to play for my grandma is one of my favorite things I get to do when I play sports.”

“It’s a bit sad to think that this game might not be possible this year. Purple Power means something to a lot of people and seeing those jerseys provides some comfort for many families who really need it,” said Ly.

Although COVID-19 may unfortunately halt Purple Power games this year, the virus did not stop the Purple Power planning committee from exploring new ways to raise money and support families affected by cancer.

“Purple Power will look very different this year. We have not been able to have our events this year because of the restrictions caused by COVID. But cancer does not stop, so neither should we. We are working with a group of high school students to design this year’s t-shirt. We are exploring ways to honor people by printing their names on the t-shirt rather than the jersey,” Colvin said.

There is still hope and opportunities for a difference to be made. Colvin said, “My hope this year is to reach our cumulative goal of a quarter of a million dollars, over the past nine years. We need to sell 714 t-shirts this year to reach that goal. We typically sell around 500 shirts each year so it will be a challenge, but I know we can do it. Together we can make a difference!”

While COVID-19 may restrict the number of people in the gym, the WO community’s dedication to fight cancer will not be restricted. West Ottawa will continue to honor those who have won the battle, support those currently fighting the battle, and remember those who have lost the battle.

Most importantly, West Ottawa will continue to fight in hopes that no one else would have to battle cancer or at least battle it alone.

Message from Diane Colvin: We are always looking for new ideas or help with our events each year.  Please contact Diane Colvin at colvind@westottawa.net if you would like to help.