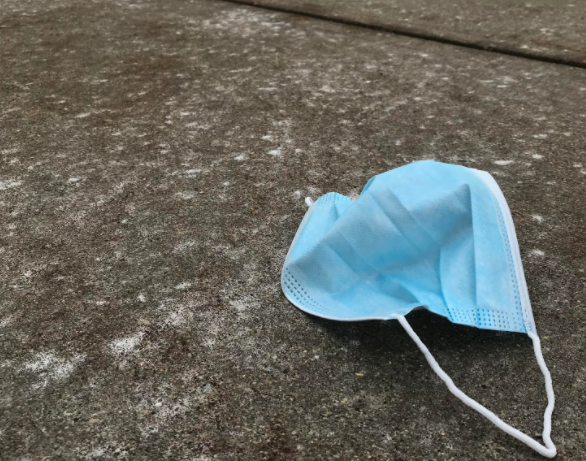 Jim Miller woke up to the glow of the sun shining through his dark blue curtains. Groggily, Miller opened his eyes and looked through the window. Fresh snow covered the ground, sparkling in the sun. As he lay and watched the snow for a minute, he remembered his New Year’s resolution.

Miller considered himself to be a stand up citizen. He paid his taxes, obeyed the law, wore his mask, and recycled. However, despite his efforts, he never seemed to be as happy as his neighbors, the Owens.

Despite having only two people able to drive, the Owens owned five sparkly SUVs. One for every day of the week. These SUVs were notorious for creating large amounts of carbon emissions because of their size. The Owens didn’t care. They did not let scientists and experts infringe on their right to own the vehicles.

His neighbors also ignored the rising COVID numbers in their state and had large Christmas parties over the holidays. Aunts, uncles, grandparents, cousins, and extended cousins flooded their driveway over Christmas break.

Their grandpa ended up having COVID and infecting everyone, but at least they were able to have a fun holiday with their family. Miller, on the other hand, had listened to the experts and spent all holiday sad and alone.

Day after day for the past year, Miller has watched with envy as the Owens’ wealth and happiness grew while he was stuck inside following  government mandates.

He wished he could be as happy and carefree as them. That is why this year he made a resolution to be like the Owens and not let the government infringe on his freedoms.

After finally deciding to get up, he walked into his large grey, modern bathroom to take a shower. After the shower, he got dressed in his favorite pair of blue jeans and a large black Detroit Tigers sweatshirt.

He left his bathroom and his stomach grumbled as he ran down his carpet covered stairs to his main floor. Once he got to the kitchen he pulled on an old pair of beat up Nike’s, put on his large winter jacket, and grabbed his keys.

Before he left, he glanced over to the plastic container holding his collection of masks and hesitated. Then he remembered his resolution. “The government isn’t going to force me to wear a mask today!” he thought smugly as he left through the kitchen door.

Once he got inside his car, he blasted the heater before heading to his favorite breakfast spot, MeeMee’s.

On his way, Miller sped and cut in front of other cars; he was determined to get there on his own time and by his rules, not the government’s. During the drive, people flipped him off and sent angry honks his way, but Miller made it to MeeMee’s without consequence.

As he pulled up to MeeMee’s, Miller smiled. Normally a ride to MeeMee’s took fifteen minutes, today it took him only eight minutes. “This must be what the Owens feel all the time,” he thought excitedly, “freedom.”

He exited his car and approached the door. As he got closer he saw a familiar sign posted on the door, “All guests are required to wear masks.” Ignoring the sign and rolling his eyes, Miller pushed open the door.

The smell of fresh waffles and syrup filled Miller’s unrestricted nose as soon as he walked in, oh how he had missed this. “Hello!” he said cheerfully to the teenage girl behind the host stand. “Hello sir, um, do you have a mask? All customers are asked to wear masks,” she said.

Miller glanced around the restaurant and saw all the masked customers. “You can’t tell me what I can do with my body. What if I have a health condition?” Miller replied snarkily. The hostess sighed and said “Well unless you have a mask we cannot serve you, I am sorry.”

“She is so rude,” he thought to himself as he turned around and walked out. He was surprised and frustrated at how fast the restaurant had turned away a loyal paying customer. “I will not be going there again,” he thought angrily.

Instead of a delicious breakfast at MeeMee’s, Miller opted for an Egg McMuffin from the McDonald’s drive through. The sandwich was not the same as the chicken and waffles he would have got from MeeMee’s but fulfilling nevertheless.

After devouring the sandwich in his car, he sat in the parking lot. He grabbed his phone and dialed up his best friend.

“Hey do you want to come over later?” Miller asked. His smile quickly disappeared when his friend reminded him of the stay at home order. Annoyed, Miller thought, “So, who cares? The government can’t control our whole lives.”

After calling more friends and getting turned down, Miller decided to reach out to an old friend, Dane Evans.

Back in high school they had been best friends. However once they graduated, Evans kept getting in trouble with the law, so Miller decided to stop hanging out with him.

“Hey Dane, it’s Jim, I was wondering if you wanted to hang out later today?” Miller asked when Evans answered the phone. Evans responded, “Hey Jim! Sure, I am actually out with some friends right now, wanna meet us behind the Walmart?”

Miller reached the Walmart in record breaking time. He parked his car and walked to the back of the building. “Hey Jim! Come over here!” Evans said as he motioned for Miller to approach the large group of men.

“Boys, this is Jim Miller, an old high school friend of mine, Jim this is Leroy, Sammy, John, and Tom,” Evans said.

Miller glanced around at the men and murmured a greeting. He had already forgotten their names. “So what have you guys been up to?” Miller asked. The boys motioned him over and had him look into a plastic bag they had stored behind the trash can.

Miller’s eyes opened wide when he realized what was going on. His breathing increased and his eyes glanced around nervously. “Remember your resolution, the government can’t control you,”  his conscience reminded him.

“So do you wanna come on some runs with us?” Evans said.

Hesitantly, Miller agreed as the boys grabbed the bag and jumped into a car. Over the next few hours they made stop after stop delivering to people all over the town.

Miller was having a great time; he finally felt happy and free. However this feeling didn’t last long.

As the boys were speeding down the road, a cop had started to trail after them with their siren on. Instead of stopping, Evans hit the gas. The boys, Evans, and Miller ran from the cops for about fifteen minutes before they finally got caught.

“Hands up!! Exit the car now!” the cop screamed as the boys, Evans, and Miller were rounded into police cars. After a quick search, the police found the plastic bag.

“You can’t infringe on our freedom to sell, this is ridiculous!” Miller complained to an officer. The police officer just rolled his eyes.

The men were quickly transported to an old stoney building located just outside of the city and separated into holding cells with other criminals in custody.

After spending a few hours in a large holding cell. Miller was moved into an overnight room and given a small piece of bread and some soup for dinner.

He sat down on the hard, cold cement bed and started to sip the watered down soup and pick at the piece of bread. Strangely, Miller couldn’t taste the bread or soup.

Too tired to care Miller put the food down and lay back onto the bed. As his eyes drifted shut, Miller smiled. He had followed his resolution and exercised his rights; he had never felt so free.