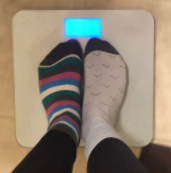 To cut a strawberry in three identical slices for breakfast, lunch, and dinner is no small feat, but something you learn to do when the pretty, skinny girls on Instagram flaunt their protruding hip bones.

Drinking only water for two days because your fourth rib is not as prominent as the others takes practice and can only be done once a week or your parents will start to catch on and stop you from reaching perfection.

Anorexia is not an easy friend to please, but she has lived with me for far too long.  Ana, my unwelcome companion.

The second Monday of sixth grade was the first time I let her small whisper persuade me into skipping lunch. I admit I was a chubbier child and never thought anything of the fact, until every girl I saw in the sea of middle schoolers wore their scrawny knees and brittle collar bones proudly.

There was nothing more that I wanted than to blend in, be a pretty girl. On my tablet, I bookmarked thinspo Pinterest boards and countless diets. Little did I know those diets would only lead to healthy girls becoming skeleton girls holding on to life with only their Diet Cokes and disintegrating fingers.

By the start of seventh grade, my chipmunk cheeks were hollowed and I finally looked like everyone else, except that was not enough for Ana.

I woke every morning greeted by fallen hair gifted to me by her on my pillow. The days became blurred and my weight scale became the only thing I cared about. I lived in the same baggy sweatpants and three-layered sweatshirts for the entirety of seventh grade, and for every three pounds I lost, I added another rock in my pocket to keep my mother from realizing her daughter was slowly slipping from reality.

Then, by the eighth grade, I was admitted into a hospital because Ana won the battle. She took complete control of my mind and body.

I was no longer Caitlin; I was a walking manifestation of Ana and the suffering she brought upon me. As I was wandering the empty halls filling my ears with the sound of the fluorescent lights humming, my eyes went hazy and my consciousness faltered; the last thing I remember before collapsing onto the cold wooden floor was the sound of my heart monitor screeching, gaining the attention of two nearby nurses.

After slowly regaining my thoughts and vision, wrapped in my dryer-tumbled hospital blankets, I heard the faintest of voices run through my mind.

“Losing this battle doesn’t mean you can’t win this war.”

I broke down and realized who I had become, or who I wasn’t. I let the optimistic, silly, and beautiful little girl I once was get tormented and torn down by a horrifying monster right in front of me.

I knew what had to be done but did not know if I had the courage necessary to win or if Ana had completely destroyed my courage.

Nevertheless, I still took my fight one meal at a time. Still under her reign, I watched my skeletal legs balloon, and my left arm was no longer small enough to fit in between my thumb and ring finger. I was devastated and angry at myself after letting my body taste what real health was and not the “health” she pushed on to me.

I was committed to getting better. I did everything I could to fight and win myself back. I sat down three times a day and ate every morsel of food on my tray. I refused to watch the nurses weigh me. I stopped talking about food, calories, weight, and most importantly her. Not giving her the room in my head helped the most in my recovery.

I could not have bounced back as quickly as I did if not for the community the program that supported me. Being surrounded by golden souls every day made the meals easier and the importance of numbers fade away. Having a strong support system is the key to overcoming a toxic friend like Ana.

My fight took 10 days of being force-fed before I was stable enough to withstand the wind and not tumble over. I vividly remember the feeling as my shoes touched the rough gravel and led me to the car. I felt proud, almost content knowing that I let myself get better.

Every day I can still hear her small whisper persuading me to skip lunch, and belittling me because my fourth rib is not as prominent as the rest, but I can promise that she will never rule over me again.