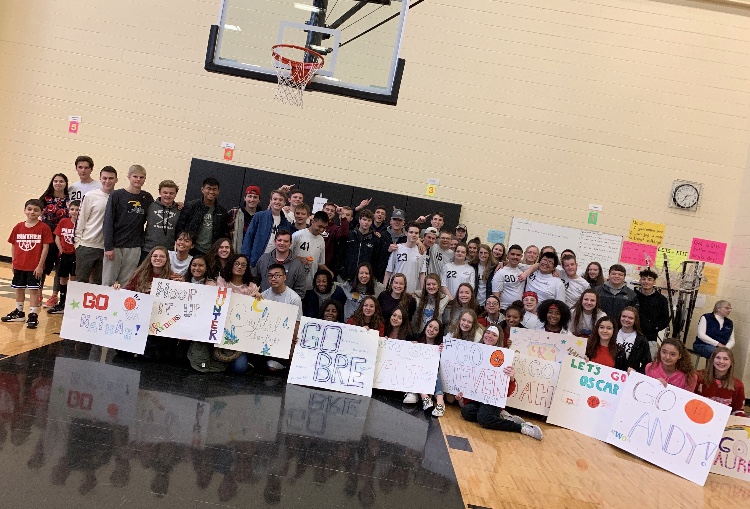 It was only 9:15 on a Saturday morning, but the parking lot at West Ottawa High School was full.

Excited parents hurried into the gym with their cameras ready.

A little while later, West Ottawa students trickled into the gym ready to cheer on their friends.

At the heart of the scene were both girls and boys of different ages wearing Special Olympics basketball jerseys.

West Ottawa held the event in the North High School building, which allowed for three courts to be running at a time. The first game started at 9:30, and the last one started at 12:30. There were 13 teams present, and each participated in two games. Games were 30 minutes long with a running clock and a five-minute half time. Each team was coed and had a wide range of disabilities and age groups on the court. While most players were high school students, ages eight and up could play. There was no admission charge. However, the concession stand provided pizza slices. All the money raised from the concessions went towards supporting Special Olympics Unified and West Ottawa’s LINKS program.

Here are five unique perspectives of the tournament:

Referee: For Diekevers, this was only his second year being a referee for West Ottawa’s home tournament but not his last. Diekevers believes that being a referee gives him a much different experience than those sitting in the stands. Diekevers said, “As a referee you are part of the game, the coaches and players talk to you…you don’t just watch players experience the joy of the game, you are a part of their experience.” Being right on the court gave him the advantage of interacting with the players and coaches. Diekevers revealed that several times throughout each game he could see the look of pure joy on a player’s face. He even remembers “one individual in particular would, every time he made a shot would get the crowd fired up with hand gestures and actually go over and give his coach a kiss.” This close to such joy, Diekevers said, “Every time I reff Special Olympics, I just come away loving sports even more than I already do.”

Coach: Plewes, Special Olympics basketball team coach, finds coaching West Ottawa’s team one of the most rewarding experiences. She finds joy in being involved in something that gives these individuals something to look forward to outside of school. When watching her team compete in games, Plewes said, “It is different through my eyes since I have watched the athletes grow during the school day and at practices.” Plewes previously coached varsity girls basketball but said “making the transition to coach Special Olympics and Unified basketball has been inspiring.” It made Plewes especially happy to see the huge crowd of students show up to support the team. As a special education teacher, she knows how important inclusion and acceptance from the students in the school is. Plewes said, “The most rewarding part of it all is seeing these athletes gain confidence, have a sense of belonging, and for our school environment to take a step forward at becoming more inclusive.”

Parent: For the parents of the players, watching their child not just play, but interact with their friends is something wonderful, as Anna Panainte says. Her son, Shaun Panainte, plays on West Ottawa’s Special Olympics basketball team. “At the Special Olympics tournament, we are among friends. As a mom, to watch Shaun confident playing basketball is just wonderful. I’m happy to see Shaun interacting with others and enjoying his participation in the game.” Panainte also believes that the atmosphere at West Ottawa’s home tournament differed from when the team played at other locations. Panainte said, “The support received from the LINKS students was fantastic. The posters, cheering, and applause are helping the team a lot.” Panainte could see the support and friendships that the LINKS program has created by looking beside her in the stands.

LINK student: Simply supporting and watching the tournament is something extraordinary, Sr. Thomas Emery explains. Emery has been involved in the LINKS program at West Ottawa for three years and has formed friendships with a lot of the students on the Special Olympics team. Emery said, “Because of the relationships I have developed with the players, watching them play is just so much more fun. Knowing them personally just makes you appreciate the joy on their faces even more.” Emery said that throughout the game both he and his friends would continually stand up and loudly cheer for the players. Emery said, “We got the whole student section going and there were a few times where one of my LINKS would look over at us after making a shot and see us cheering and just proudly smile.” For Emery, supporting this event was about making these players’ smiles a little bigger.

Player: West Ottawa graduate Breanna Washington has only been playing on West Ottawa’s Special Olympics basketball team for one year. However, they have already become like her family to her. Washington said, “It has really helped me to make friends and if anything they are more like a family to me including the coaches.” For Washington, playing on the team is about so much more than just basketball. Washington said, “I’d say my favorite part about playing basketball is just being able to hang out with the team. Getting to know them has really changed my life in a way. I really wouldn’t have gotten as far as I have without them.” Washington also feels blessed by the support from those in the stands. “It’s nice to know that the crowd took time out of their day to be able to show up for the game and I want them to know that I am very thankful.”