Playing puck with the boys 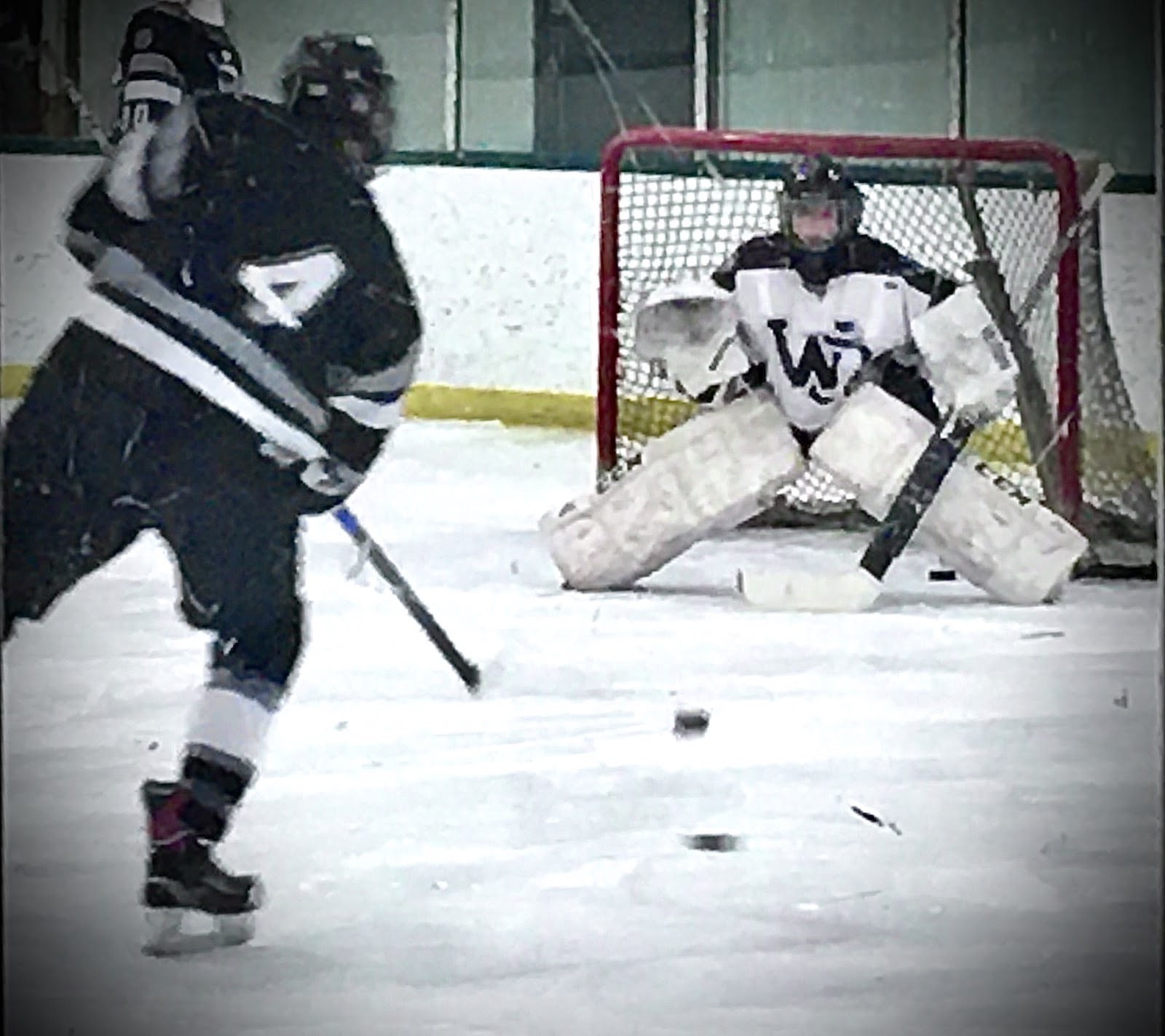 Ever since she could remember, Jr. Timberlyn Mazeikis has been around the violent, testosterone-driven sport of hockey. Growing up, she’d spend hours snuggled up alongside her dad on the couch watching as the Red Wings fought to put a hockey puck in a net. After falling in love with Detroit Red Wings player Darin McCarty during kindergarten, she signed up for skating lessons at the local rink. That’s when her hockey career started.

When teenage girls think about hockey, they think about cute boys skating on the ice. It’s the stereotype our society has created. Mazeikis challenges that stereotype by being the only girl on the West Ottawa Hockey Team. She’s breaking the traditional stereotype of a hockey player. A female in a male-dominated sport, she’s playing puck with the boys.

In years past, she has spent countless hours playing for the club team “Grand Rapids Amateur Hockey Association.” It has teams specified for each gender, meaning she has only ever played with other females. She continues to play hockey with the other girls as their starting goalie.

Then this year came around, and everything mapped out a little differently. The West Ottawa Hockey Team received a new head coach, Caleb Duckworth, changing the game for her a bit. She felt that her current club team “Was not as challenging as I wanted it to be.” Her only other option was high school hockey. There is only one team at West Ottawa, so if Mazeikis wanted to play she had to play with the boys. She knew that playing with the boys meant “faster shots and a lot more ice time to help [her] continue to get better.” With the thought of making leaps of improvement, she went to tryouts, and with little surprise, made the team. She secured the position for backup goalie.

“Everything has been going well; [it’s] easier than I expected.” The boys on the team treat her like one of them. “With guys, they kinda make jokes about each other. If someone scores on me they cheer and include me in those jokes.” In that sense she isn’t out of the loop.

But, at the same time, it’s an adjustment. The girls she has been playing with on her club team consistently preach positivity, but the boys know that they’ll get called out if they aren’t trying their best. Mazeikis said, “I think with the guys it’s a mutual understanding that if someone tells you something, it’s only to make you better and help your team.”

On a male-dominated team, she often experiences gender stereotype obstacles, especially on game day. She remembers not being able to find a locker room at South Side Arena when playing against Byron Center. “I spent 20 minutes before my game trying to find someone who knew where I could get ready.” When she finally got to the girls locker room, it wasn’t really a locker room. More like a closet where she could lie down and touch both walls. “I had to put on my leg pads in the hallway because there was not enough room to put them on with other equipment in the room.”

This in mind, Mazeikis often misses out on pre-game conversations with her teammates. She has to spend time before the game by herself creating a different pre-game ritual than what the guys create. “I don’t get the adrenaline rush that the guys get from each other. I really have to focus and mentally prepare myself alone.”

Locker rooms act as a place to bond with one another after hard practices, talking about their coaches and what they need to work on. Without that time alongside her teammates, it can be difficult.

After each practice she locks her equipment in the guys locker room, but she doesn’t have her own locker. The next day when she goes to get her sweaty gear out of their locker room she has “… to wait for someone to tell me I am good to go in the locker room.” She then carries her stuff down the hall to a different locker room with no shower and a door that doesn’t shut.

Despite her daily challenges “It’s nice to just be another player…” on the ice, which is helping her focus more on playing instead of proving herself to coaches.

For the future of West Ottawa, Mazeikis wants to “… represent that girls can play along with the boys. With the right coaching girls and guys can play simultaneously alongside one another, if that’s what they love.” West Ottawa gives every person the opportunity to take part in clubs or sports of their choosing. It just takes that special someone to persevere while chasing their passion.

She continues to be a role model to everyone around her. Especially to the young ones who look up to her. If a little girl came up to her with the dream of playing hockey, Mazeikis would tell her to “… keep going no matter what other people say, no matter what challenges you face. What’s important is that you improve and you make your own fun. Enjoy what you’re doing even if you’re doing it by yourself.”