Keepin’ it real: the power within an atom 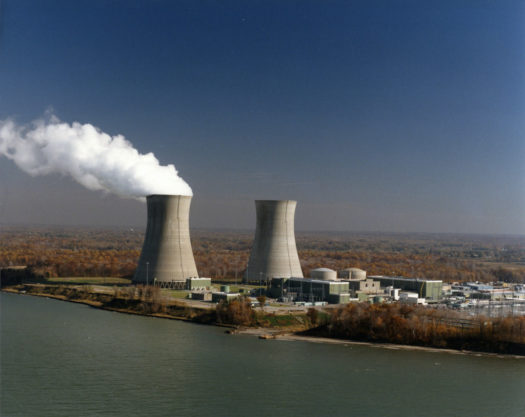 On February 7th, 2019, Representative Alexandria Ocasio-Cortez and Senator Edward Markey introduced a pair of resolutions to the House and Senate to implement a Green New Deal.

One of the biggest issues mentioned in this legislation is converting the entire energy grid to clean, renewable energy sources like wind, solar, and hydropower.

Current nuclear power plants rely on atomic fission: taking atoms of unstable materials, like uranium, and forcing them to split. Destroying the bonds between atoms release substantial amounts of energy, which reactors use to boil water. This water, now steam, spins a turbine in a generator, making electricity

Using radioactive metals to generate electricity has been a controversial topic since the end of World War II, after the development and use of two nuclear weapons in Japan.

Nuclear energy can be dangerous. It’s why regulations are so tight and why the Nuclear Regulatory Commission is very selective in giving operation permits.

But to plan a switch to 100% clean energy without nuclear is insane.

In France, nuclear power makes up 71.6% of all energy production. They are the world’s largest net exporter of electricity in the world and make a large profit doing so.

Imagine the possibilities of nuclear power becoming the leading source of energy here in the US.

Opponents argue that the cost to build, maintain, and decommission reactors often outweigh the benefits of cheap electricity. They cite disasters like Chernobyl or Fukushima Daiichi, in which reactors went into a meltdown and exploded.

As for the meltdowns, the disaster in Ukraine is an unfair stain on nuclear history. The Russian engineers intentionally sabotaged their safety measures to run a poor test of reactor procedures. That, coupled with the rushed, substandard design of the reactor itself, led to the meltdown and subsequent explosion.

In Japan, a massive 9.0 magnitude earthquake created a 33-foot tsunami wave, flooding the reactor and disabling the emergency coolant systems. Issues like these aren’t a huge issue in the US, with little areas of seismic activity. Yet issues like tornadoes and wildfires may become prevalent.

These disasters speak more to issues with reactor design. The conventional water-cooled reactor was designed for submarines, which are submerged in water all of their lives. When these reactors came off the boat and onto land, it became necessary to pump water to these nuclear plants.

But who said that we had to stick to an outdated design?

Modern tech companies show that the nuclear power need not come from the large, traditional plant that it always has.

Instead, these companies are innovating.

Take, for example, Terrestrial Energy’s new reactor. Instead of using pressurized water to cool the reactor core, Terrestrial has opted to use molten salt.

Wired Magazine explained: “Unlike water, salt wouldn’t boil off, so even if operators switched off safety systems and walked away, the salts would keep cooling the system…. Salts heat up and expand, pushing uranium atoms apart and slowing down the reaction (the farther apart the uranium atoms, the less likely a flying neutron will split them apart, triggering the next link in the chain reaction).”

In other nations like China, “pebble bed” reactors have taken off in popularity. These reactors rely on spheres of radioactive fuel being locked away in graphite.

Other reactor designs use helium gas to cool the core. Others can take spent fuel from standard reactors and reprocess it into fuel for itself. In top research facilities like MIT, a new form of power, nuclear fusion, continues to make itself more promising in the next 50 years.

Innovation takes time. It took 45 years between the invention of the arc light and Thomas Edison’s patent of the incandescent light bulb, for which he had thousands of trials and errors.

Why should we stop with nuclear power?

Let’s give it a shot.