Sometimes it’s hard to be a good teammate 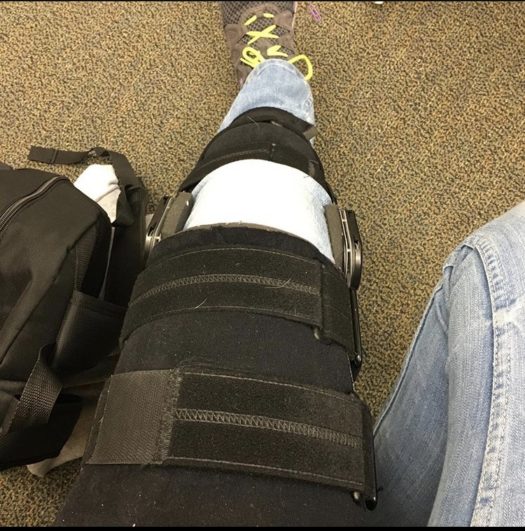 I remember the stabbing feeling in my stomach like it was yesterday. I lay on the cold examination table, knee throbbing, and knew my season was over.  The words brace and crutches rang through my ears like the bells to end a day. May 8 will forever sit in my memory as one of my worst days.

After subluxing my patella tendon, post-injury timeline showed crutches for a month and a brace for two.  With lacrosse districts around the corner, my season was officially over.

I hated not playing. I watched my teammates do what I loved most and grew a hatred for them. I envied to be on the field like they were. When teammates complained about practice or having to play, I selfishly wished it was them hurt and not me. Jealousy burned inside of me, and it became difficult to watch my team from the sidelines.

I began not coming to practices. I stayed away from my teammates and avoided conversation, knowing it would drive me to lash out.

Post-injury is a constant uphill battle. For those who have experienced a season-ending injury, knowing you can’t play any more not only brings pain but also jealousy.

Jr. Hannah Broersma suffered a stress fracture in her foot, which ended her cross-country season in 2018. When Broersma knew her season would be over she was angry. “I acted all fine at practice and I went home and I cried or I threw a pillow against the wall. I was not happy at all because I wanted to be part of the team.”

She still attended practices but struggled to feel connected with her team. “I tried to be part of the practices as much as I could but obviously I couldn’t go out on runs with them and they don’t stay on a specific field so they’re just out running.”

It was difficult to watch her teammates do what she loved. Broersma said, “Watching the girls run the meet or just being the timer because you can’t do anything else. It’s really hard.” Over time, she grew jealous of her teammates. She became frustrated when teammates complained about practice and or made comments like “you’re lucky.” Broersma said “When teammates are like oh you’re so lucky you don’t have to run the workout. I don’t know. It’s still really hard to watch people do something that you want to do and have them think you’re lucky but you’re really not because you’re sad and you’re frustrated.”

Broersma re-injured herself this season but is pushing to come back happy and healthy next season.

Jr. Adria Hamilton experienced similar feeling after an injury ended her tennis season. While recovering from a backhand during a tennis match, Hamilton hyper-extended her knee and tore her ACL. “I was mad I couldn’t be a part of matches and kinda broken because I was really upset about it,” Hamilton said.

Hamilton struggled more with her mind than her physical pain.  “it’s not really my leg it’s more my mental aspect and just knowing that I can’t play for a couple more months is really hard, it’s hard to process. And the knee pain does hurt, but it’s more mental just knowing I can’t play.” During her injury, Hamilton had many negative thoughts about herself. She felt like the injury was her fault and it seemed “the world was crashing down.”

Her injury sparked a sense of anger and jealousy. Watching her teammates do what she loved was torturous while she was stuck on the bench. Although she felt guilty, deep down she was jealous of her teammates and struggled to enjoy watching them play. She envied them. Hamilton said, “Around my team, I felt I had to be supportive, but it was extremely difficult to sit there and watch my team compete when I couldn’t do the same.  I went home crying many times, and it was difficult to see everyone have a good time and enjoy the experience when I couldn’t be a part of it.”

Hamilton recalled one specific moment during states where her emotions hit her hard. Watching her team compete at states and knowing she wasn’t a part of it was devastating. Hamilton said, “I remember I was feeling really sad at state.  I couldn’t compete for my team and watching on the sidelines throughout the season was not enjoyable or fun.” Her teammates complain about tennis and having to play. It hurt to know that while she was off on the sidelines unable to play, her teammates were unhappy playing. Hamilton said,  “I remember some of my teammates complaining that they hated tennis to me. All I could do was get upset because they, at least, were able to play at all.”

Although she knew she needed to bring energy and positivity to her team, It was difficult because it wasn’t how she was feeling inside. It was hard for her to be happy for her teammates when they could do what she loved when she couldn’t.  Hamilton began feeling as if she wasn’t part of the team and began distancing herself.

Through her injury, Hamilton has grown to appreciate the small things in life. “It’s made me stronger than anything because I’ve had more appreciation for the fact that people can walk and do normal things with my injury I couldn’t so it made me notice that sometimes we take things for granted.”

Hamilton can’t wait for this coming season and to be back on the court. “I’m just really excited to get back into things once I’m back to normal.”

Broersma, Hamilton, and I are all lucky in one regard: we will get to continue doing what we love after recovery. For some, injury not only ends their one season but the rest of their high school sports career. No matter the sport, athletes alike love what they do. When that is taken away from us there is one thing we wish for: to be back doing what we love