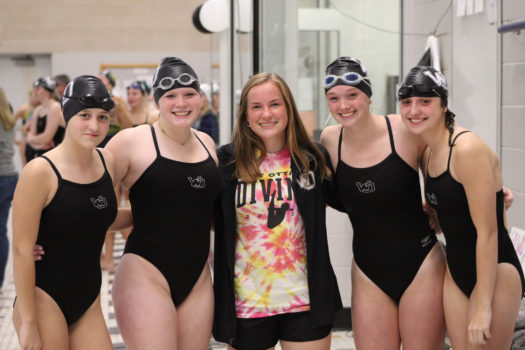 Only two months into dive season, Jr. Brecken Panse got a concussion during soccer practice. Her teammate threw a ball in bounds and hit her in the head. Panse immediately felt the symptoms especially headaches and dizziness. “I took the impact test and was diagnosed with a concussion; I missed practice for a few days then just rested and slept,” Panse said.

The concussion was bad enough she went to the doctor and got school accommodation papers, “I got extra time on tests and assignments.” Meaning she would be out of diving, maybe for the rest of the season.

Getting an injury during season is something all athletes dread. “It was really hard to just sit at dive and watch them practice,” Panse said. With all the emotions rushing Panse hated the idea of being out for the rest of the season. During her time out she did her best to eat well and stay healthy, “I tried to eat healthy and still workout as much as I was allowed. To stay ready for dive when I could get cleared.” Along with staying positive, and supporting her team, “it is still good to support them and be there for them,” Panse said.

All six divers are all very close, therefore Panse’s teammates felt her pain. “Any time someone is taken out of a sport it impacts the whole team. Even though she couldn’t practice with us, on the days when she would come visit we were all in a better mood and had a fun time with her being around,” Jr Leah Hopkins said.

After a month of watching her dive team compete and contributing by supporting and cheering them on at meets, Panse was itching to get back. “It was the biggest time of the season with the most competition going on,” Panse said.

Coming back to compete in the conference and regionals was a goal for Panse, and she was close to getting cleared, “I figured I should finish the season strong.” Even though having a concussion was really hard on Panse she believes,  “It allowed me to just take a break, just step back a little bit from dive and when I got back into it I think it was more enjoyable,” Panse said.

Like any other injured athlete, it killed Panse to just watch and not be on the board. However, Panse used this as a learning opportunity and by watching her teammates and other teams dive. Panse kept a good attitude and helped her teammates in practice. She grew as a diver during this time, “ When I got back into it, it just showed me how much muscle memory I have of dive and how fast I can get it back,” Panse said.

On November 7, Panse and three of her teammates competed at conference finals. After eight rounds of dives, all four divers competing from West Ottawa placed in the top 10, Panse placing third. “It felt rushed because I got cleared then conference came very quick, a more adrenal rush time,” said Panse. Being back on the board excited Panse and her teammates, “It was fun to get back into it. Being back with the team was great and it came back to me fast.” Panse was proud of how she did after having only four practices. She proved her strength during the toughest season of her life; and her determination allowed her to see success in the end.

With Regionals on November 14, Panse did the same dives she did at conference where she placed third. “I feel pretty good, I got third at conference so I’m hoping it will go well again,” Panse said before Regionals. She was happy to finish the season strong, however she didn’t move on to the state meet.