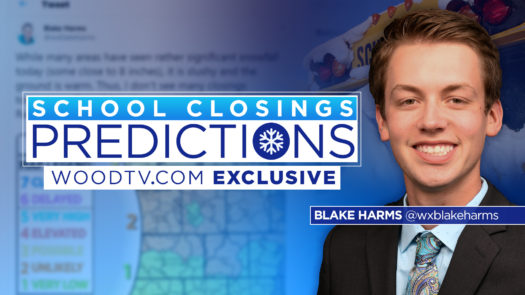 Schools all over West Michigan had enjoyed the third snow day in a row near the end of January 2019. Everyone was hopeful for a fourth snow day to come. As the night approached on the third snow day, there was only one place to go to hear the chances of a snow day. We all waited eagerly for the notification to pop up on our phones that Blake Harms was going live on Instagram. Clicking on quickly, we waited for Harms to speak.

When it comes to snow days in West Michigan, Blake Harms is the man. He is the guy to turn to when snow day chances are high. Students across West Ottawa shared their gratitude for Blake Harms.

Sr. Blake Pedersen said, “I love Blake Harms. Any time there is bad weather, I constantly check the live stream to see what he has to say. Whenever I hear him say we have a four, it makes me super happy and hopeful. I really appreciate what he does.”

Sr. Zach Goodwin said, “He is really reliable. Whenever he says there is a good chance we will have a snow day, I go to bed expecting to sleep in. That is how much I trust him.”

Jr. Sophie Walsh said, “Blake Harms is the person I go to for a snow day prediction. He is the go-to weatherman for all high school students.”

Harms grew up in Hudsonville, Michigan and attended Hudsonville Public Schools. Harms always had taken an interest in meteorology early on in his life. Harms remembers a very specific moment when this interest truly began.

“There was a day that I saw some waterspouts over Lake Michigan in Grand Haven and that really sparked my interest.”

That day when he looked over the lake and saw the spouts was just the beginning of a very hectic, yet successful life for  Harms. The number of opportunities and experiences coming Harms’ way were chances not everyone got to take. So, he took advantage of them. This was the beginning of a journey for him.

Harm’s predicting of snow days started in middle school. People would ask him to make predictions, but not completely serious. Freshmen year, though, Harms started to predict a little more seriously.

Harms said, “In eighth-grade and throughout middle school, I kind of made these predictions, not as a joke, but was just pretty laid back. People would ask me at school and that was about the extent of it. Freshmen year, I thought maybe I could try doing it on social media and the winter of 2013/2014, which ended up being our second  snowiest of all time, that helped me out quite a bit.”

Ware said, “I met Blake when he was my student in eighth-grade science. He joined my class every morning for 1st hour by waiting in the hall until the bell rang and then he would jump into the classroom with arms stretched out from side to side and proclaim, ‘Good Morning America!’  At that point, he had already begun his passion for weather and he was always comfortable in front of a group of people… I knew from the beginning that there was no doubt that Blake would become a success.”

Ware remembers a specific moment that stood out to her about Harms’ personality. She knew after that moment he had a bright future in meteorology.

Ware said,” The week after school gets out many 8th graders choose to go on the East Coast Trip. I was a chaperone the year that Blake was in 8th grade and he was on my bus. Every morning Blake would have the day’s weather report for the city that we were visiting. He would come to the front of the bus and speak confidently on the bus microphone as the rest of his classmates would listen to hear the forecast for the day.”

As he grew older, he continued to share his predictions with his classmates and on social media. His predictions started to grow all over West Michigan. Students from Grand Haven to the Zeeland High Schools would join his live streams to check his predictions on snow days. Harms started to become the man all the high school kids turned to for predictions.

The live streams helped Harms start to connect with people from different schools, and he received many positive comments about his work. Despite all the positive comments, there were some negative comments lurking as well. Angry people would become mad with certain predictions. This made his job a little harder, but he still worked his hardest.

Harms said, “It was difficult the first year too when I was really doing the predictions, but once you get to talking and reply to their comments, you realize a lot of them are nice people. They just get carried away by the fact that you can say anything you want on social media. So, I have had a few (negative comments), but for the most part, it’s definitely overwhelmingly positive and I am very thankful for that.”

Struggles along the way such as trying to not get too carried away with his predictions were obstacles for Harms. Obviously, it’s impossible to be 100% accurate in every prediction, so Harms feels great pressure whenever he makes these predictions. Dealing with different types of weather also led to his struggles.

Harms said, “…sometimes you gotta stick to a forecast, you know, and if it goes wrong, it goes wrong and if it goes right, you are in good shape… freezing rain always gets me and the one thing I struggle with sometimes is not getting carried away because you are only out during one season.”

Since high school, Harms has continued the live streams and is studying meteorology. The journey from being a little kid with a dream to a dedicated college student has been a long one. Harms isn’t even close to being done yet, though. Many opportunities have come his way to further his career in meteorology.

Harms said, “I am currently studying meteorology at Valparaiso University. I am in my junior year, and it was between here and Central Michigan, but this is the school I really enjoyed.”

The opportunity to study meteorology was a great gift for Harms. The chance to pursue something he really loves is a chance many people would love to receive. Harms had a plan in place and is taking action by putting in the work.

College is a great experience for Harms, but that isn’t the only opportunity that has been presented to him. He was very fortunate to receive a chance to intern at WOOD-TV 8. This allowed him to further educate himself in meteorology and get the experience for the future.

“I was able to partner up with WOOD-TV 8. I interned there this summer, and we kind of talked about the opportunity, for it to come about, where now I am producing the maps for WOOD-TV 8.”

Some of the staff at WOOD-TV 8 see much potential in Harms for his dedication. He was described by Terri DeBoer, one of the meteorologists at the station, as a hard-working individual. DeBoer had much more to say about Harms.

Deboer said, “Blake is very passionate about weather.  His knowledge and scientific training, combined with his passion make him a great forecaster.  He has developed a significant social media following by creating a ‘School Closings Forecast’ brand.  I’m happy to help mentor Blake, as we welcomed him as a Storm Team 8 Intern last summer. He is dependable and works very hard.”

Harms has come a long way from that one day of glancing over Lake Michigan. Through years of hard work and dedication, he is on his way to a successful career. He found a career path that he loved and used his knowledge to inform us, high school students. With all of these experiences and opportunities, he is set up to do great things in the future.

Harms is the first place we turn for predictions and someone we look to for anything snow day related. Harms has become part of our winter lives during high school. We all thank Harms for what he has done. He is no ordinary person, he is the unsung hero of snow days.

To see what Blake Harms is about, check out his Twitter: