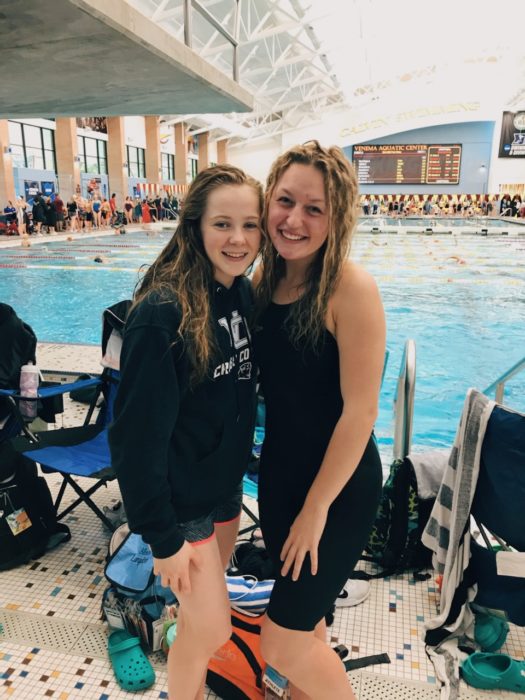 It’s conference, the biggest swim meet of the season for the Lady Panthers. Soph. Kendall Vaara looks out the foggy bus window after a long day at school. Teammates are excited singing along to the team tradition Party in the USA, in the background. Vaara instead puts her earbuds in to listen to her pump up playlist as she anticipates her races coming later that afternoon. Primarily the 100 yard butterfly, her shot at state.

She was shorter than most, atypical of a common butterflier. In the OK Red Conference, few people knew who she was. Swimmer Alonna Clarke from Grand Haven High School even approached a member of the West Ottawa team during a dual meet. “Who’s that? She’s good.” Over the last year, Vaara took the initiative to start training year-round. Years prior she, “saw these other super fast girls, and realized I wanted to be that fast.”

Over the last year she has realized that hard work pays off, but not always as we hope.

Up until her freshman year, she played other sports, attempting to discover her passion. After concluding her first year swimming at the high school level, she finally found her calling. “I really started to like it. I started to go to more meets and fell in love with it.”  And from there the passion grew.

The following winter after high school season, she joined West Ottawa’s USA Swimming program, West Ottawa Swim Club. She came home after school, do homework, and then go to the pool. This routine would continue Monday through Friday from November to March. Previously, she would go to practice simply swimming back and forth for an hour and a half, but that changed. She started to figure it out,  “It’s not so much coming to practice every day. It helps, but I set a goal. Instead, I’m working towards that goal [state], and coming to practice with a purpose.”

Working with coaches, Vaara got technical help in each stroke, especially butterfly, where she had the most potential. At the end of her season freshman year, she finished her 100-yard butterfly with a 1:09.32; her hard work in and out of the pool would later shatter that time.

Her first opportunity to race this event sophomore year came around: Zeeland vs. West Ottawa. In years past, the girls swim and dive team had no problem coming home with a win, but this year was different. Zeeland had a strong team and every point mattered. Vaara knew that. Diving just finished, and she was ready to go. Standing behind lane five with the top seed from her team, she was ready to show everyone what she had been working on in the off-season. She dove in to race and finished at the wall with a time of 1:03.12. A whole five seconds faster than where she ended her previous season. Although she did not take first, she scored four points for the team.

Her position on the team had changed; she was contributing points. Vaara says that she started to become “closely knit with the girls, but it’s also more pressure because my points matter.”

Practices stayed consistent, setting foot onto the pool deck every day with a goal in mind. She continued to race sitting right around the same time from her meet against Zeeland. With the exceptions of some small time drops, the lack of large improvements started to get to her. “I tell myself I am doing so well, and I’m proud, but then I get one bad race, and it completely destroys me. That’s when I have to remind myself of how far I’ve come, because last year there was no way I could be where I am right now.” Her hard work continues to prove she is going places.

A few weeks later, ten girls, including Vaara, traveled to Calvin College for the first qualification meet of the season, MISCA. Coach Steve Bowyer had mentioned to the girls that they should wear their racing suits because the girls had opportunities to swim fast. Vaara took this as a challenge. Once again, she stood behind her lane, focusing on taking a few deep breaths. Visions of the race swam through her mind as the official blew his whistle. Her feet knew what to do as they stepped up onto the gritty block.  “Take your mark…” and before she knew it she was flying through the water. She gave the last 25 yards everything she had, improving her time to 1:02.70.

She wasn’t there yet, but she inched closer and closer to her goal: qualifying for state. After MISCA she got back into the water knowing that this was the home stretch of the season. She put her head down focusing on what she had been doing the past year; working her butt off in and out of the pool. During this tough training period, Vaara said, “I’ve been a lot harder on myself, but it’s fun to push yourself and see how far you can go.”

She had two more meets to race her heart out: Conference and Second Shave. It surprised the team at how fast the season had flown by, but the week of Conference seemed to move by slowly. Once the day of prelims finally hit, she was ready to go. Vaara stepped onto the bus with her pump up playlist turned up to maximum volume, focusing in on her race for that night. Knowing her hard work over the year would reveal itself, she was ready to race at prelims. After warm up, she headed to the locker room to put on her fast suit. After struggling for 15 minutes to put on her suit that was five sizes too small, she felt like superman.

It was time. Almost instinctively, she stepped up onto the block with her eyes on the prize. Parents and other students filled the stands to her left for support. Everyone behind her wanted her success almost more than she did. She took one last deep breath and the buzzer went off. She pushed off of the block, rocketing herself towards the water. Her arms flew with strength in every stroke. She hit the opposite wall and turned in the blink of an eye. With every breath she took she could hear the energy in the room. Her race continued to build lap by lap; she raced to the wall to look up at the scoreboard and see her time, 1:00.96. She sat as fifth going into finals.

When the next day came around, she was rested ready to shave off 97 milliseconds from the time she finished with the night before. However, her body did not respond how she wanted it to, leaving her frustrated after finals. Vaara added onto her time in finals missing her cut, and dropped down to eighth in the conference. Later that night she said, “I’m not that happy with my success yet because I set a goal to make state and haven’t quite gotten there.”

Luckily for her she had two more days to prove to herself that her hard work would get her to where she wanted to be. Second Shave, the last chance meet of the season had the hope to be her success story. Going in with the right mindset and teammates there for support encouraged her that the season was not supposed to be over yet. Vaara was in the final heat of the 100 yard butterfly.

The buzzer went off and Vaara exploded off the block only thinking about one thing- qualification for state. She raced her heart out for one final time and looked up to see the scoreboard. Next to her name was the first-place signification, but when her eyes darted to the other end of the board, her time appeared as 1:00.48. She missed her cut by 0.49.

Her heart broke slightly. She glanced back to the board to notice that she was not the only one with a 1:00.48 in the race. Her and her teammate tied for first together, going out with a win. After the race Vaara said, “Maybe I didn’t achieve my goal, but looking back on the season I have done every single thing I could, and I need to be okay with that. I have worked so hard this past year. Although I may not have made State, I improved so much and that should be a win to me.”

No matter how hard you work, sometimes it’s just not in the cards. With that said, Vaara is already in the weight room getting ready for her next season, 2020 is her year.