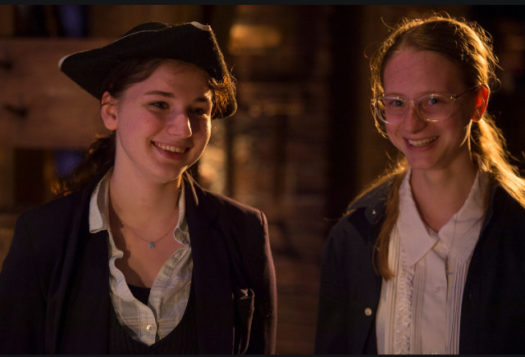 “The entire performance was amazing. It was a powerful piece, Tegan’s death and Gloria’s reaction to it was heart-wrenching,” said Soph. Emily Conlon. Conlon referenced a short piece Gloria Hunt and I performed at the Hamilton Education Project.

On March 16, Hunt approached me about performing in a piece she wrote and composed on the Boston Massacre for the Hamilton Education Project. We recorded a video during Drama Club, edited and submitted the video. We thought nothing of it.

On April 11, Instructor Jeremy Heavilin called my house and told me that Gloria’s piece was selected to be performed at the show. Gloria and I were both ecstatic and terrified. We had one week to perfect everything. Gloria and I spent hours rehearsing. We worked with Instructor Ann Kirkendall to perfect our staging and acting. We called friends and family to figure out how to act like brothers. I learned how to die on stage. Gloria and I put together costumes using clothes we already had and went to a thrift store for a few final items.

April 18 was performance day; I got up at four after a restless night’s sleep. Gloria and I had rehearsed for hours the night before. Nevertheless, we were up, awake, and in full costume. We wore black pants, boots, and white button-up shirts. I wore a vest and a blazer along with a tricorner hat. Gloria had a men’s blue button-up shirt on as a jacket. Both of us had our hair in low ponytails. We got on the bus bright and early. Heavilin played the Hamilton cast recording over the speakers. Gloria and I took many Hamilton quizzes on the internet and looked at memes.

When we arrived, we got a tour of the backstage. It was amazing. We were shown where they kept the costumes, and we walked across the stage to be shown where we should stand. After that, we were taken to a room where the other performers were.

I met so many talented performers. We all took turns performing our pieces for each other. It was the first audience that we would be performing in front of. Gloria did all of the singing. I had one line. But that one line was very powerful. I yelled to the wings, “Fire away you damned lobsterbacks! Fire if you dare!” I never finished saying the word ‘dare’ before clutching my side and stumbling back before falling to my knees and dying. I will never forget hearing everyone laugh when Gloria hopped on my back in the beginning and the sound of everyone gasping at the sound of the shot and watching my body jerk before falling. After I died on the stage, Gloria let out a blood-curdling “Sam!” and rushed to kneel by my body. I could feel the audience’s breath caught in their throats. After we finished our piece, we stood up, took a bow and walked off stage.

After the performance, there was a Q&A with some of the cast, filled with jokes and laughter. Then we went to a children’s museum to eat our lunch, and to continue to listen to Hamilton.

We made our way back to the theater. Entering the theater once again, I got in line to buy a shirt with the logo that made all of this possible. Taking our seats in the second row from the stage, I could see every bead of sweat on the actors’ brows, we were so close. The show was magnificent. Watching these people embody people from 1776 was absolutely mind-blowing.

After the show, we loaded back onto the bus and started the journey home. Every one of us was in awe of the artistry we had just witnessed. We laughed and caught up on some much-needed sleep.

If you ever have the opportunity to participate in the Hamilton Education Project, I absolutely recommend it. The Hamilton Education Project will only cost you $10. All you would have to do is create a piece about American history. There might even be a chance to go this year. If WO doesn’t get to go this year, stay on the lookout to participate. You won’t regret it.