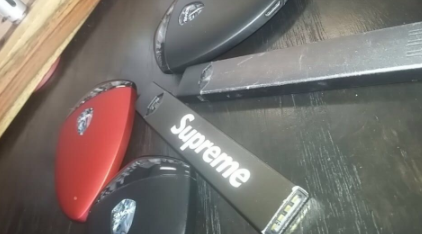 “It’s scary how addicting it is to vape because now I feel like I have to rely on it. It’s apart of my everyday routine,” said anonymous WO Sr.

There is a vaping epidemic all across the United States where teens are getting into the usage of e-cigarettes.

States such as our own have banned the sales of flavored e-juice as an attempt to stop teens from vaping. Vaping these flavored e-juice cigarettes are still bad, but the media should be shedding more light on smoking Tetrahydrocannabinol (THC) cartridges instead of vaping.

THC cartridges are small attachments that go into a vape pen. The vape pens are filled with cannabis oil high in THC content. Upon smoking, the THC enters the blood through the lungs and then enters the brain where it starts to take its effects which causes the user to be “high.”

Smoking these THC cartridges is dangerous for your respiratory system. As reported by Rolling Stone Magazines, “An 18-year-old male patient showed up to NYU Winthrop Hospital in Long Island complaining about chest pain, nausea, fever, and shortness of breath… There he was diagnosed with ARDS, a condition associated with acute lung injury. He was connected to a breathing tube and placed in a medically induced coma for one week.” It wasn’t until after he was in the hospital that his mother found a THC cartridge, which his girlfriend admitted he used three days prior to checking in to the hospital.

The Centers for Disease Control and Prevention (CDC) found that there was a total of 1479 lung injury cases associated with vaping and 33 confirmed deaths in 24 states and most patients report a history of using THC-containing products. The ingredients used in the THC cartridges are what causes users to experience these injuries.

Since the legalization of marijuana, the state of Michigan requires testing for 100 chemicals before dispensaries are allowed to sell products. Of all 100 chemicals, vitamin E acetate, or oil,  is not included in that list. Vitamin E oil is commonly used in skincare products, not meant to be inhaled. Regardless of the harms to your respiratory system, vitamin E oil is used because it is a cheap alternative the THC cartridge brands use to thin out THC oil, making it easier to indulge when vaping.

Brands such as DANK vapes and TKO include the substance which when heated and inhaled, releases toxins that can cause lipid pneumonitis which is a specific form of lung inflammation.

According to NBC News, a 30-year-old woman died from contracting lipid pneumonitis after “the woman admitted to inhaling home brews of marijuana oil made with either petroleum jelly or vitamin e oil.”

There have been numerous cases all over the country dealing with damaged respiratory systems from “vaping”, but THC cartridges are the real killer.