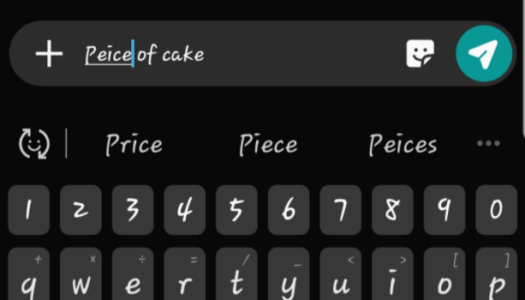 “Poeple” turns into “people,” or more commonly “peice“ turns into “piece.” Autocorrect. The fast-food for texting, autocorrect is the perfect tool for people sending a text on the go, and there is no need to worry about spelling.

With the ever-increasing use of autocorrect, society seems to have become dependent upon it. People rely on autocorrect throughout the day, and any text sent requires autocorrect multiple times. Since people need not think much using autocorrect, reasonably, autocorrect would have a negative impact on their ability to spell.

According to a West Ottawa poll of 62 students, over 80% use autocorrect on their phones. There’s no denying that autocorrect crept into society, so people need to know the accompanying harms.

Autocorrect can lead to embarrassing moments. Alyssa Karner, a West Ottawa High School student, said “I was trying to finish a presentation for humanities. I didn’t have internet available on my phone so autocorrect wasn’t working. It was embarrassing because halfway through my presentation everyone in the class started laughing, and I realized…I spelled philosophy [as] philisophy.”

Embarrassment accompanies the absence of autocorrect.

According to a 10 question West Ottawa spelling test, of 36 randomly selected students, 30 of them used autocorrect, and only six claimed to not use autocorrect. This further backs up the claim that many people are using autocorrect, but the results of the actual test were quite interesting.

After collecting the data of students who claimed to not use autocorrect, their scores ranged from 70% to 90% correct. The average, 85%, is a decent average, though many of the words were elementary level.

The numbers brought optimism to the claim. However, the scores of people using autocorrect ranged from 40% to 100% with an average of 80%. Although the scores averaged slightly lower, the correlation is too weak to be considered. The claim became debunked.

Using autocorrect poses more benefits than harms. The one latent harm is a rare chagrin that would likely occur without autocorrect.