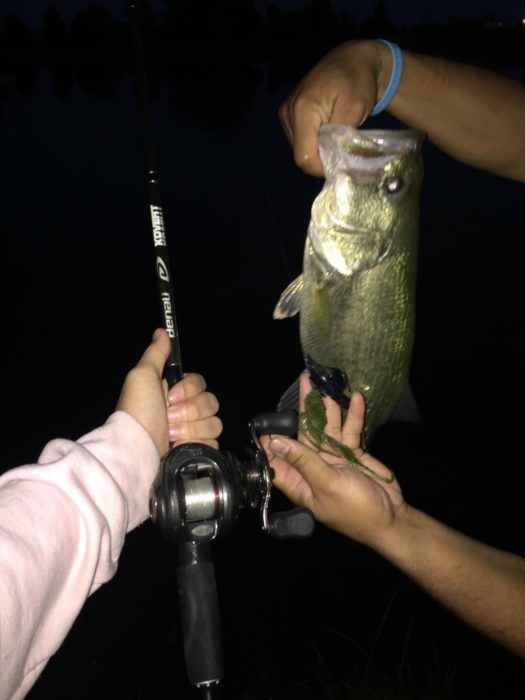 This past weekend, I woke up at four AM to start my morning with a two-hour ride to Betsie River. It was going to be a big day for me because it was my first time fishing for salmon. My cousin started telling me about how hard salmon fight and how exhilarating it is to catch one, so I was eager.

The day before salmon fishing my cousin and I headed into Dunham’s to buy $80 waders so I could walk through the numbing cold river. We still had to buy pink yarn, beads, fishing leaders, and a new fishing reel. Now that we were ready, we both went home and stayed up until four AM.

We drove for almost two hours and by the time we got there, it was six in the morning. The river was crammed with anglers ready to hook into big salmon. Once we got settled into our spot we were hooking up to salmon within minutes!

“Fish on!” I yelled as a signal to other anglers that salmon would be coming their way.

“Fish off!” I yelled again as the salmon broke my line off.

I walked through the water to get back to shore to re-tie my lure. After several minutes of tedious work, I walked back to get into my spot. Half an hour later I yelled “fish on!” only to have my line break causing me to re-tie all over again. This cycle continued from yelling “fish on!” to “fish off!” until three in the afternoon to which I felt defeated and ready to go home.

Being an angler is going to come with a price. A price you will have to pay for being an angler is the amount of time and sleep you lose. I missed out on getting sleep because I stayed up until four in the morning and I spent almost 12 hours of my day fishing.

Another price of fishing is the possibility of not catching anything. You may spend hours of your day out on the water fishing and return home without a single catch.

Khamvongsa says “My soul was crushed.” after spending multiple hours out fishing.

Don’t get it all wrong though. There are going to be days where you don’t catch anything. I too am a victim of this. Over the summer I spent a whole day fishing with my cousin and I watched him catch fish after fish while I caught nothing. It was very unpleasant. I felt so bummed out and miserable that I just wished we could hurry up and go home. You win some and you lose some though,  and that’s just one of the prices you have to pay.

Fishing won’t always end like the way my fishing trip ended. There will be a time you have a big fish on the other end of your line and the experience is like no other. This past summer I caught my personal best bass weighing at 5.3 pounds.

Finances also come with the price of being a fisherman. According to the U.S. Fish & Wildlife Service’s 2016 National Survey of Fishing, Hunting, and Wildlife-Associated Recreation, anglers spent $46.1 billion on fishing-related expenses including traveling.

I have spent a total of almost $1000 already on fishing-related expenses. My money while fishing goes towards expenses such as gas for my car, fishing rods, fishing reels, and lures. In the sport of fishing, you are always going to find yourself spending a lot of money.

West Ottawa Instructor Bob Myers says from boats to fishing gear, he has already spent an estimate of at least $10,000 in his life. Myers says that every year he will spend about $1000 during the summer just on fishing expenses. Although this may seem like a lot of money, this year he almost broke even. A pound of salmon is worth $9 and Myers has accumulated about 100 pounds of salmon this season equalling out to $900.

Being an angler may come with many sacrifices like the ones I made while fishing this past weekend, but that shouldn’t stop you from going out and enjoying the sport! According to the 2018 Special Report on Fishing by The Outdoor Industry, participants who did fish during childhood grew up with positive memories of the fishing like spending time outside and enjoying family and friends. So get out there and go experience it for yourself!