Opinion: Comedy special of the year 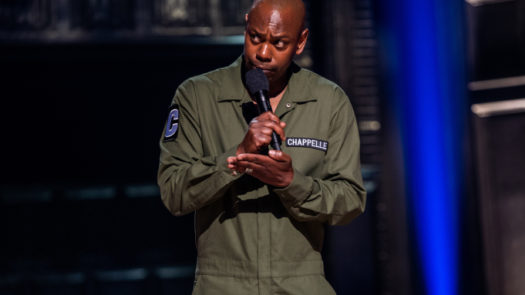 “Good people of Atlanta, we must never forget… that Anthony Bourdain… Yeah!… killed himself. Anthony Bourdain had the greatest job that show business ever produced. This n**** flew around the world… and ate delicious meals with outstanding people. That man with that job hung himself in a luxury suite in France.”

Funny. Engaging. Shocking. And against this age’s “cancel culture.”

Comedy, especially  stand-up, has always been about making jokes at the expense of others.  SNL did skits about the 2016 Republican debates and how stupid the candidates looked. Kevin Hart made jokes about breaking a dollhouse over his son’s head if he asked for girl toys. The social codes and taboos that we follow every day? Unsacred and breakable to comics of all varieties.

That’s what makes them funny.

In Sticks and Stones, Chappelle’s style doesn’t change a bit. His biggest influence in his comedic style is Eddie Murphy. When Murphy first started doing stand up in the 80s, his skits involved lampooning Italian Americans, overweight people, gay people, and even African Americans.

Chappelle, like Murphy,  has no problem taking on the nation’s most political, polarized, and heated topics: abortion, guns, the LGBT movement, MeToo movement, Jussie Smollett, Michael Jackson, school shootings, and the opioid epidemic.

And he does it in a satirical, funny, politically incorrect manner. And that’s awesome.

The critics disagree. And disagree sharply.

With an abysmal critic’s score of 35% on Rotten Tomatoes, people tend to think this special had nothing to do with the concept of comedy. Until they saw the 99% rating from the general audience.

To be fair, there were only 17 critic reviews, compared to the 35,000 reviews from audiences. However, the question remains: how did the critics get this far out of touch with the rest of the viewers?

In one of the most scathing reviews, Melanie McFarland for Salon.com writes, “On the whole, ‘Sticks & Stones’ exists as a defiant design to intentionally offend large swaths of the audience Chappelle deems too thin-skinned and easily outraged, too quick to find offense, while serving up simple, low-bar yucks to anyone yearning for validation of their anti-P.C. stance. Indeed, it may end up being one of the defining comedy specials of our time.”

This concept that only this special features Dave Chappelle using politically incorrect language is just silly.

That “defiant design to intentionally offend… the audience”? A pinnacle of Chappelle’s circular comedic style, where a joke is told, and then subtly reappears towards the end.

Those “low-bar yucks [for] anyone yearning for validation of their anti-P.C. stance”? A stupid idea. Society has gotten so twisted in political correctness that it bleeds into a release people have had for years: comedy

What McFarland does get right is how Sticks and Stones will be “one of the defining comedy specials of our time”. Chappelle’s comedic touch isn’t new, in fact far from it. His sharp acuity has been passed down from Eddie Murphy and Richard Pryor, some of the first recipients of the Mark Twain Award for American Comedy. In fact, coming up later this year, Chappelle will receive the award, an honor earned by the likes of Whoopi Goldberg, Bill Murray, and Ellen DeGeneres.

Typically, a bad comedian wouldn’t win an award shared by the best comics since its inception. Especially one named after the founder of American humor.

And yet, still we argue that this new special isn’t “good”, isn’t “respectful”, isn’t Chappelle.

And yet, still this concept is proven wrong. The audience knows this. Why don’t the critics? Or the media?

These comedic naysayers often come from a position of political correctness, that celebrities, politicians, etc, should be held to life of perfectness. Coupled with this era’s cancel culture,  ANY mistakes will be brought to the surface.

Does this apply to a comedian? Should they limit their natural talent for jesting and teasing to appeal a small minority?

Comedy will offend people. Whether there are Christian jokes, Muslim jokes, tall jokes, short jokes, the lot, a joke will hurt someone. The difference is in the comic.

In stand-up, if an audience doesn’t like something, the comic will know within SECONDS. Listen to the audience. If they aren’t liking the fat jokes or the gay jokes or the ethnic jokes, move on.

If after trying to change the direction or ignoring jokes, the audience still can’t handle the skit, Dave Chappelle offers the easiest solution. Don’t watch. It’s a choice people have to make.