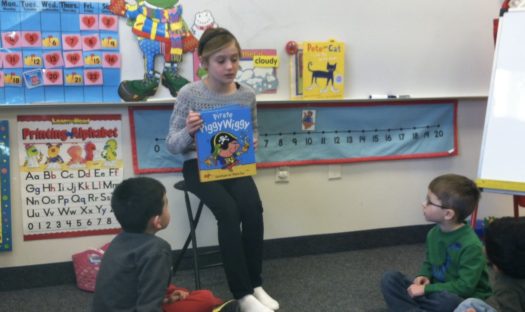 It was the perfect sunny day for the perfect last day of fifth grade. I heard my fifth-grade teacher, Scott Follett, call my name. It was my turn to walk on stage.

I couldn’t believe that I was here.

Each year on the last day of school, Lakewood holds a celebration for all the fifth graders moving on to middle school. The celebration took place just across from Lakewood at Fellowship Church. We played games, danced, sang, and ate snacks.

Near the end of the celebration all the students, teachers, and parents gathered. Each teacher prepared to read a prediction of where they believed each of their students would be in twenty years.

Once I reached the stage, I looked up at Mr. Follett and he smiled. An anxious feeling settled in my stomach. I had no clue what he would say about me. Mr. Follett cleared his throat and began. “From a young age, Alyssa has always wanted to be an elementary school teacher. She has the perfect personality to be successful…” I let out a sigh of relief.

Ever since I was a little girl, I wanted to become a teacher. At Lakewood, I was blessed with amazing teachers. These teachers inspired my dream to be there for kids, just as they were there for me.

Today, however, I don’t know where that dream is. I’ve tried to hold on to it, but the dream seems to have slowly slipped away.

I do not receive the same encouragement from my current teachers or even from some of the same people who inspired me back in elementary school.

My mom, for example, has taught for more than fifteen years. However, any time I tell my mom that I want to be a teacher, she laughs and says “No you don’t.” While she loves me and would support my career choice no matter what, she can’t help but discourage me from teaching when she feels frustrated or exhausted with her job.

Forty-eight teachers responded to a poll asking “Would you encourage your child to be a teacher?” Eighteen of these teachers selected “No.” Another two responded that they would only suggest being a teacher if their child truly felt a calling because teaching is not a career to go into lightly or with any uncertainty. Meaning roughly forty percent of teachers would not encourage their child to become a teacher.

Many teachers at West Ottawa voiced that the current teacher faces a much higher workload than teachers in the past. West Ottawa Instructor John Johnson said “It’s not the profession it used to be. The workload is ever increasing while salary and benefits stagnate or shrink.”

Despite technology ultimately increasing efficiency in the classroom, technology also adds to a teacher’s workload. Today, teachers receive 20 to 30 emails per day. Students and parents expect teachers to respond even after they leave the classroom. “Emails are the one aspect of technology that feels like added time and effort. I will frequently get questions in the evening that I wouldn’t get without email,” West Ottawa Instructor Paul McNitt said.

Teachers’ benefits have also decreased. Another West Ottawa teacher said they would not encourage their child to be a teacher “because the pay and benefits for new teachers is far different than it is for myself…in a bad way. For example, my benefits in retirement and my pension is going to be much higher than new hires, even though they teach in the same school as I do. Under the current laws, my children would get paid far less than I do if they became teachers.”

Teaching has never been a field with a high salary. Yet, the difference between a teacher’s salary and other college-educated workers is at a record high. A study by the Citizens Research Council of Michigan found “In 2018, the weekly wage gap — the difference between teacher pay and other college-educated workers — was 21.4 percent.”

It’s no wonder the number of college students enrolling in an education field has rapidly diminished. A report by the American Association of Colleges for Teacher Education found in the 1970’s that the number of education degrees awarded annually peaked at 200,000. Today, that number is under 100,000.

The way the community views teachers is partly to blame for the decrease in students enrolling in education. There simply isn’t the same amount of appreciation for teachers as there used to be. “The teaching profession has suffered from a lack of respect from those outside of education,” West Ottawa Instructor Paul Chapman said.

Despite these problems in education, many teachers still feel teaching is a rewarding career. Audra Bolhuis Assistant principal at West Ottawa, said “Being a teacher is an amazing experience.  Getting to help kids in this exciting part of their lives is the best thing in the world!”

Next summer I have to apply for colleges.

I don’t know what I’m going to do.