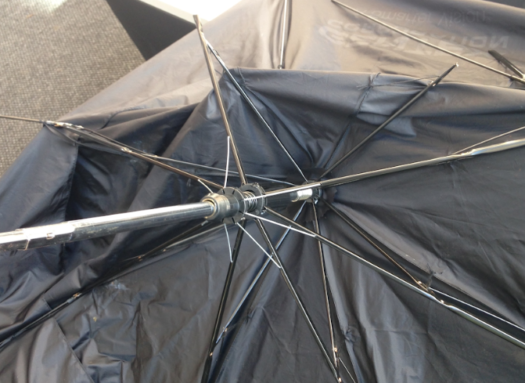 On a recent Tuesday, after walking in the pouring rain between buildings, I came into my 2nd hour and slouched into my seat. I felt everyone’s eyes on me. It was no wonder because I looked like I had taken a shower in my clothes. A shiver went down my spine as I bent down to get my folder for physics. When I pulled out my folder, I realized that even the papers inside had gotten damp.

On rainy days, after the bell rings, a hoard of kids rush from their classes to the main entrance hoping they were fast enough to get an umbrella. I know I do. But somehow, every time I look in the bin I’m too late, no matter how fast I get there. How is it possible that a whole bin of umbrellas could be gone in less than 10 seconds?

Yes, I could have brought my own umbrella. But I had gotten used to the convenience of grabbing an umbrella by the door. In February 2019, Gentex donated 100 umbrellas for students walking between buildings on rainy days, and the students are very grateful for it!

However, on every rainy day, there seems to be fewer and fewer umbrellas in the bins. If students are lucky enough to get an umbrella, it will most likely be broken. Some umbrellas are so damaged, they can’t be used anymore.

The fact that high schoolers can’t responsibly take care of umbrellas is upsetting.

As a student here, I see firsthand how the umbrellas are treated. After walking in the rain when umbrellas are no longer needed, kids make no effort to close or put them away. Some students leave umbrellas half-open on the ground around the bin, in staircases, or in random entrances around the schools. Apparently these high schoolers’ time is too valuable for the five extra seconds it would take to properly put the umbrellas away.

One particular rainy day, as I was walking outside I noticed an opened umbrella in the staircase. As I picked the umbrella up, I could immediately tell that it was broken beyond use. three of the metal ribs of the umbrella lay disconnected from the canopy and dangled uselessly in the air when I held it upright.

Going forward, we can only hope for another generous donation like this. And even if Gentex would donate again, after we had destroyed nearly 100 umbrellas in less than a year, students would have to show greater maturity. Our students need to grow up and appreciate and respect what they are given. Or else students will get those gifts or privileges taken away.

“It’s disappointing, for sure,” Principal Jason Reinecke said. “This was a donation from a local partner who obviously spent money to give us these umbrellas. They didn’t have to do this, they weren’t required to do it. They were doing it for something nice to do for our students.”

“I know that students would rethink the way they treated those umbrellas as they are walking through the rain.” He said, “Unfortunately, that’s kind of a life lesson; the decisions you make in the short term affect the long term.”

It’s upsetting that an article like this would have to be written to high schoolers.