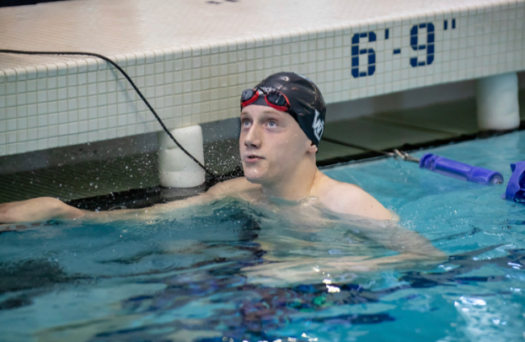 ▲
Kevin after one of his events at the state meet.
Laura Veldhof

▲
Kevin after one of his events at the state meet.
Laura Veldhof

It’s 5:45 in the morning when Soph. Kevin Maas dives into the cold water to begin his grueling day as a swimmer. After swimming 3,150 yards he’s ready to go to class. Only to come back later and practice for another two hours.  He’s following in the footsteps of his siblings Kyle, Jenna, and Derek, who swam for West Ottawa since they started. It’s his time to shine and continue the legacy his siblings have left behind.

The success of Kevin’s siblings would intimidate most but not him. He puts his head down handling the pressure with competence.

First born in the Maas family is Kyle. From a young age he was encouraged to compete athletically but his parents had a heavy focus on swimming; as they grew up swimming too. Early in his swimming career he competed for the state of Michigan at elite meets, getting first place titles. This continued to progress throughout his high school career. His senior year he had finally gotten fast enough to compete with the best in the sport at the Olympic Trials in 2016. This opened many doors, some of which led to where he is now—swimming on a full ride at the University of Alabama, a Division I Swim Program.

In 2018, Jenna graduated to swim for Oakland University, another Division I Swim Program. She set multiple relay records starting from age eight through her high school career. Jenna also achieved All Conference Honors, and All American Relays as well. One of her most exciting accomplishments was her conference title her senior year and beating West Ottawa rival Rockford for the first time in years.

Derek is probably the best known Maas. He graduated this past year with 89 redeemable college credits at the University of Alabama, making him an academic junior during his freshman year. Not only is he brilliant, but successful as a swimmer too. He’s beat some of Kyle’s highschool records and won multiple titles at the 2019 MHSAA Division I State Championship. Later during his club season, he got not only one but two Olympic Trials Cuts for the 2020 Trials in Omaha, Nebraska.

As the youngest of four kids, Kevin has a lot to live up to. But there is hope as former West Ottawa Swim Club Coach Sam Hoekstra believes, “Kevin will be the fastest freestyler to come out of this family.” He has a lot to accomplish within the few short years he has left here at the high school. His way of reaching that is unlike most people, with the intense competition in his household he states, “I just try to do my best and not focus on other people.”

When Kevin started the sport he said, “My siblings were doing it so I felt that I should…” “….and yeah I felt pressured at first, but it became fun.” He reassured that at home, “There is a friendly rivalry. Derek always tries to beat Kyle’s times and looks at other people’s times…” but once again, Kevin keeps his head on straight and focuses on himself.

This mindset becomes beneficial to the young Maas in academics as he claims, “It takes the pressure off.” But he also realizes that there is a high standard which led him to admit, “Sometimes it’s hard when everyone expects you to do good academically, and I don’t always do that good. I do homework during school, go home for a quick break, and then right back to swimming where there is no time for homework.”

Despite the pressure, he continues to succeed in the pool. As a freshman, Kevin competed on the Men’s Swim and Dive State team, something uncommon as a freshman. He has already competed with the top 16 fastest MHSAA Division I swimmers in multiple events as a 15-year-old, giving him some experience for the rest of high school.

His speed as a freshman gave the brothers an opportunity to compete together on an exceptionally fast team to win the MHSAA Division I State Championship. The brothers swam to first in the 200 Yard Medley Relay with a final time of 1:31.01. Derek led off with backstroke (22.14) and Kevin brought it back home in the final 50 Freestyle with a 21.14. “It was really cool to win state with him in the 200 Medley Relay.” In some families being on the same team would create conflict, but Kevin points out, “He pushed me in practice to go faster when I was already really tired. He was a team motivator.”

As he looks into the future, Kevin still has a while to decide what he wants to do as he is only a sophomore.  He is granted the opportunity to continue the “Maas Legacy”. “I would define my legacy as someone who creates their own greatness.” To achieve that, he strives to be “Someone that helps out younger people, and coaches. Like a leader, who puts their name out there.”

This pool will become his over the next few years. Goals are already in mind as he states, “I would like to do good in class, keep getting faster in the pool, maybe break a few records.” But he also wants people to keep in mind, “Yes we’re good academically, and athletically, but really we are not much different from anyone else. We still have the same classes as others, and work just as hard as other people. In the end I just feel like every family is different.”