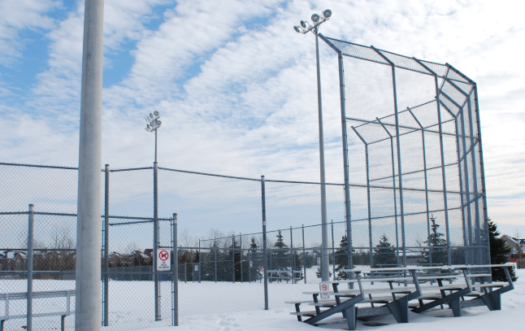 Sr. Mac Strobel stood shivering in the outfield during the West Ottawa Varsity baseball matchup against Hudsonville. The temperature hovered around 37 degrees, and he could feel the cold dew of the grass covering his white New Balance cleats.

The final Hudsonville batter of the fifth inning stepped up to the plate. After two strikes, Hudsonville hit a high fly ball to Strobel.  The ball went about 330 feet back. Strobel knew he had to turn and run to make the catch, but because of the cold, his reactions were slowed. The ball landed straight in left field, only a few feet from the fence. Strobel picked up the cold, damp ball and whipped it towards third base. However, Hudsonville was able to score.

If it were warm that day, Strobel would have been able to react quicker to make the catch the first time. “The cold weather made it very hard to catch the ball.  I felt all of my muscles tighten, making it almost impossible to get to the ball,” said Strobel.

Iowa is the only state where the high school baseball season is in the summer.  Baseball practices begin on April 29, and their first game is on May 20. Michigan high schools should use the same schedule.

There are many obvious pros to playing in the summer, most of which relate to the weather.  Andy Hoverson is the current athletic director at Urbandale High School in Iowa. “I grew up in Minnesota, which plays spring ball, and it was awful at times. Snow in April, cancelled games every week, etc.  In Iowa, we get a full month of outdoor practice before our first game,” Hoverson said.

During the summer, teams do not have to play in bad weather like teams in Michigan do. This season, West Ottawa has played multiple games in temperatures below 50 degrees.

This is a huge contributor to the level at which players can play during the spring. In colder weather, players get cold and can’t throw the ball as effectively as one could in warmer weather.  Metal baseball bats also do not hit the ball as far, and every muscle in a player’s body can get cold and tight. This makes playing baseball in the summer a much better option for teams who want to play to the best of their abilities.

Mark Hey, the varsity baseball coach at Ankeny Centennial High School in Ankeny, Iowa, has served on the Advisory Board for the Iowa High School Athletic Association for several years. He is a huge supporter of the summer baseball season. “We can play and practice during the day since school is not in session. This allows us to play 9th grade games (typically doubleheaders) starting at 11:30 am, followed by a 10th grade doubleheader on the same field starting at 5:00 pm,” Hey said. Players in Iowa don’t have to worry about practice and games after a full day of school; instead they can get a full night of sleep and wake up ready to play.

Another pro is that summer baseball doesn’t interfere with spring sports. “We don’t have to compete for athletes.  Student athletes can run track, play tennis, lacrosse, soccer, which are all spring sports in Iowa, and they don’t have to choose to not play one over the other,” Mark Roering, head coach at Dowling Catholic High School in West Des Moines, said.

During a summer season, teams are able to play more games. “[We] play a 40-game regular season while other northern states like Minnesota, North Dakota, South Dakota might get 20 games in because of snow,” James Duea, Athletic director at Walkie Senior High School, said.

When the baseball season is in the summer, college coaches are able to come and watch the players as they play regular season games.  This is possible because the coaches do not have to coach their teams as all college games have been completed.

However, while playing baseball in the summer is more desirable, there are some conflicts that would be hard to avoid.

Most players are unable to go on family vacations during the summer.“I enjoy going on mission trips and vacations during the summer with friends and family.  The trips might be the parts of the summer I enjoy the most. If baseball was in the summer, it would be hard to find time to spend with my friends and family on these trips if I was always busy playing baseball instead.  It’s not that I wouldn’t enjoy the baseball, but I also would like to spend time with family and friends on summer vacations and mission trips,” Jr. Quinn Howard said.

Summer baseball also makes it hard on the players to get summer jobs.  Similar to the vacations, it is hard to work around the busy baseball schedule. “It is hard to manage my time while working 40-50 hours a week during the summer.  I am constantly busy, and adding things to my schedule is a nearly impossible task,” Sr. Thad Niziolek said.

Playing baseball in the summer also hurts the players wanting to get recruited for other sports. “College and pro scouts get out in the spring time to see many players in other states while they play.  Then in the summer is when there are many pro/college showcases that my players have a really hard time getting to,” Roering said.

With the baseball season in the summer, players may face difficulties getting recruited their senior year.  Players would have to be recruited during their junior year, which is a gamble for many colleges. A college would have to count on players to keep progressing throughout another entire season rather than waiting to recruit players after their senior season.  This allows them to see how they have played and make better decisions about the players they want on their teams, rather than gambling with a player after their junior year.

“The athletic office is actually closed during the month of July, which would add to the issues if rescheduling needs to take place. While weather would certainly be better to play in and it would likely lead to a lower number of games being rescheduled, I just am not sure it is doable in the current calendar setup,” West Ottawa Athletic Director Bill Kennedy said.  If a game would need to be rescheduled, it would pose a major problem, adding to the dilemma of baseball in the summer.

Taking everything into account, the benefits clearly outweigh the harms. Having our baseball season in the summer would be beneficial, but difficult to accomplish. Any baseball player who has experienced playing in 30 degree weather understands how aggravating and uncomfortable playing can be.

The warm weather alone is enough to make me want to change the current season to summer. The question is whether or not others would be dedicated enough to the summer season.