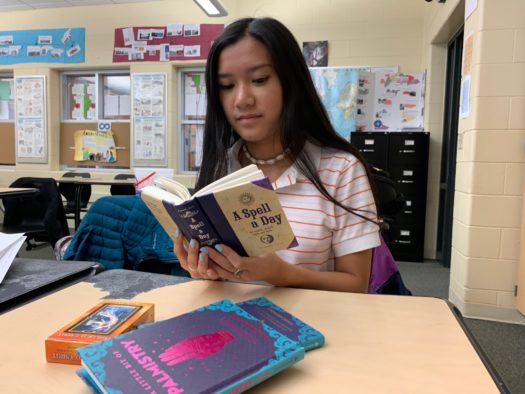 Under the soft glow of the stars and with the rhythmic sound of water washing up on the shore, Victoria Sisomsouk makes a wish and tosses a small pebble out into the darkness of Lake Michigan. With a sudden plunk the pebble sinks to the bottom of the water and her wish is to be granted.

This is one of Sisomsouk’s favorite spells because of how beautiful it is. She’s been practicing divination for one year now. Sisomsouk casts a variety of spells–some are for good luck on a test, others for good weather; some require colored candles and herbs, others require only words–but the one thing they have in common is they provide comfort to her.

White magic, as it’s commonly referred to, is magic done for good reasons. “I feel like a lot of people don’t understand that. When they hear I do spells they’re like ‘Oh she’s a satanist,’ but that’s not it,” Sisomsouk explains. “I just want to comfort myself and other people in their future and personal lives rather than trying to harm people.”

Sisomsouk started doing spells because she was inspired by movies like Coraline and Sabrina The Teenage Witch where divination is portrayed. Her cousin also practices divination, so she was influenced and decided to try out spells, palmistry, and tarot card reading herself. After buying a couple spell books and doing research online, Sisomsouk was ready to take magic into her own hands.

The first spell that Sisomsouk ever tried was the Phone Spell. She was texting someone and wanted them to respond, but they just weren’t getting back to her. As the time ticked on, Sisomsouk turned to her spell book for an answer. The Phone Spell only required words and “was really simple and easy.” Five minutes after reciting the spell, she got the response she was hoping for. “I was like, ‘Okay wow, this really works.’”

When Sisomsouk realized that she was getting effective results, she started experimenting with different, more complicated spells.

During a time when anxiety-inducing remarks and verbal attacks were swirling around her, she decided to try out a confrontation spell with hopes that the conflicts would stop. “I get nervous easily so I don’t want people to confront me in public,” she explains. Sisomsouk executes the spell by writing a peaceful message to herself and folding it for safekeeping so that it can protect her.

Similarly, Sisomsouk has done spells to stop the spread of rumors. She has found these spells to be successful too, saying “I have never heard rumors about myself since.”

Acknowledging that divination is “a gimmick” that she believes, she notes that “it’s also a boost to my confidence. I believe in the spells, but half of it is to help ease me and make me feel more comfortable.”

Wanting to spread the feeling of reassurance and confidence, Sisomsouk offers to help her friends do spells, along with reading tarot cards and palms for fortune telling.

“If you want to call me a witch, go ahead. But do your research,” she warns. “Divination exists all over the world, and I use it to find comfort in my future and personal life.” Straying from the bubbling cauldron and green skinned stereotypes, Sisomsouk uses spells as a way to help her get through the hard times and have hope for the future.