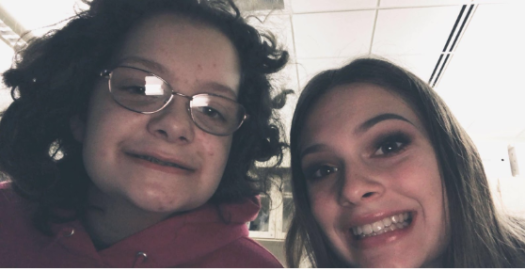 “Are you sure you don’t want this seat?” I asked a sophomore boy. “No. It’s fine, thank you though,” he said.

I felt bad for taking his regular lunch seat, so I decided to buy him frozen yogurt to let him know I was sorry. “Here’s some frozen yogurt for you, and I’m really sorry again for taking your seat,” I said. Even though I accidentally took his spot at lunch, I felt good knowing I had apologized and bought him froyo because he lit up and accepted it.

Since childhood, we have been told to be kind to others, but how often do we go out of our way to show kindness? After asking myself this question, I realized the answer was not often enough.

Recently, two of my friends, Soph. Kennedy Crider and Jr. Jonathan McCabe, shared their experience of when they went out of their way to spread kindness around West Ottawa and explained the effect it had on themselves and others.

Anyone who knows Crider would describe her as a genuinely nice person; during the week of February 18, she worked hard to spread kindness throughout WO.

Crider is part of the “LINKS” program, where she helps out her LINK, Frosh. Aurora Wells, daily.  Nonetheless, Crider helped Aurora in a way that will never be forgotten.

In class, Crider noticed something off about Wells. She wasn’t talking much and was pretty short with Crider,  which was unusual and made her think something was up. Shortly after, Crider found out Wells was having a hard time finding someone to go to Camp Geneva with. Crider knew Wells wanted someone to go with, so she asked if she would let her come with, and Wells gladly accepted the offer.

At camp that week, Crider and Wells played volleyball and basketball together and a lifelong friendship was created. Not only did this make Crider happy to see her new friend happy, but she knew Wells was as well.

“Aurora’s smile was bright and happy and lifted anyone who saw it. Seeing Aurora happy is all I want and I’ll continue to be not just her link, but her life long friend always.” Crider has built a strong friendship with Wells and being able to perform this act of kindness for her everyday felt good. Crider was there for her, not just for extra help in math, but to be a friend even when others weren’t.

Crider’s next act of kindness was simple yet meaningful, and was an act anyone at West Ottawa could do. As her World History teacher explained the next partner project, Crider scanned the room in search of someone she had never worked with. Crider completed her project with Jr. Micaias Soria Rios; they connected right away and a great friendship was formed.

When Crider asked Rios if he wanted to work with her, he was hesitant at first, but agreed anyways. They never worked together, but they were acquaintances and had small talk before. Throughout the week of the project, Crider and Rios got to know each other more and more and began to talk every day, even when their project was finished!

After the partner project, Crider was grateful she asked Rios to work with her, and not only did it make her happy, but Rios as well: “Kenna is such a great friend, and I’m so thankful she asked me to be her partner, otherwise I would lose out on such a great friendship.” They both had a lot in common not only academically, but with their personal lives as well and are still friends.

Crider could have easily chosen one of her close friends. However, she made the bold decision to pair up with someone new. “This made me feel great knowing all you have to do is simply step out of your comfort zone and great things can come from it,” Crider said.

By choosing a different partner, Crider met a new friend, and was able to be partners with someone who may not have had someone to pair up with.

Jr. Jonathan McCabe was also one to spread kindness around West Ottawa. Recently during lunch, McCabe was in the cafeteria about to pay when he noticed a holdup. When he made his way up the line, he realized that a student didn’t have any lunch money left in his account. McCabe saw the boy check his wallet and see that there wasn’t any money in there. Feeling the tension between the lunch lady, the boy, and his peers, McCabe decided to make an impactful choice.

McCabe decided to pay for the boy’s meal because he knew he had some extra money in his account and did not want to see him go without food. The boy thanked McCabe happily and moved on with his day. McCabe saw the relief in his face and stress lifted when he was able to walk past the line with a meal for lunch. McCabe continued reflecting on this simple action; “I felt pretty good because I know that boy got to eat his food, and knowing a small action in your world can make a large difference in someone else’s is a realization that I think everyone needs to make.”

Spreading kindness throughout West Ottawa was definitely an experience for Crider and McCabe to remember. Being genuinely kind is very effective-not only to others, but personally as well. A simple, yet heartwarming action is so easy to give and only takes a minute or less to implement. Being kind can change one’s mood in a matter of seconds and show others that there is always someone who cares.