Pepper Says: It’s all in the details 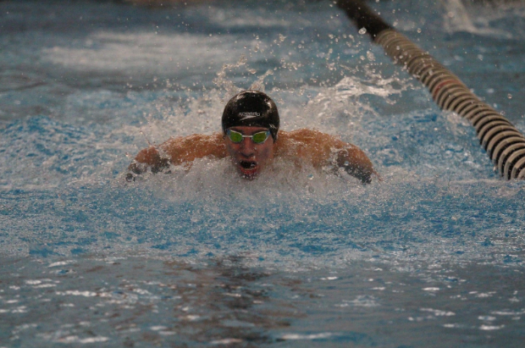 It is West Ottawa versus Hudsonville, one of the biggest meets of the year.  Jr. Jamahl Hogan steps up to the block, knowing that his team needs the points he could earn from the 100-yard butterfly. The horn blasts and Hogan dives into the water then brings his arms tightly to a point in order to cut through the water efficiently. Throughout the race Hogan stays even with the swimmers on either side of him, knowing that to win he needs to save some energy for the end.  Leading into the home stretch, Hogan needs to pull away from the competition if he wants to earn the crucial points that come with winning the race. It is now that Hogan focuses on his kick more than anything else. To go as fast as possible, the kick in the last 25 meters of the race is essential. When every other muscle is sore, the kick is what propels Hogan to victory. He pulls away from the competition, and touches the wall before the other swimmers from Hudsonville, winning the race to earn points for his team.

Hogan is one of the best butterflyers on West Ottawa’s swim team, the same team that is ranked first in the state.  It is a great accomplishment.

However, it was not always this easy.  As a child, Hogan considered himself as more of a distance freestyler than a butterflyer.  It was not until middle school that he switched to butterfly as his primary stroke. “It was hard completely switching focus the way I did, but I am glad I changed.”

Because of this, for a majority of his time since middle school, he has been working on the same butterfly stroke and kick.  For a butterflyer, the kick is the most important asset in a swimmers arsenal. “Having strong underwaters can help me swim less in the front half and keep my arms fresh near the end of the race” Hogan said.

Over the time he has worked on his kick, he has one key technicality of his kick which he focuses on the most.  “I focus on trying to have an even kick. That means I try to make sure im getting as much push from my kick when my legs are moving up as when they are moving down”  Hogan mentioned.

The butterfly kick is so critical for Hogan because it is extremely exhausting to finish a 100 fly without a strong kick.  His arms would get tired much faster and he wouldn’t be as efficient as the other racers. Since it’s so important, Hogan has improved his kick to the best that it can be, and without his perfected kick, he would not be nearly the butterfly swimmer he is today.  “I attribute a lot of my success to perfecting my kick. I would not be nearly the butterflyer I am today had I decided to focus on something other than my kick.”

Hogan is going to help his team hopefully become State Champions in March.  Come out and watch Hogan and the panthers at their state swim meet at the Holland Aquatic Center on March 8th and March 9th.