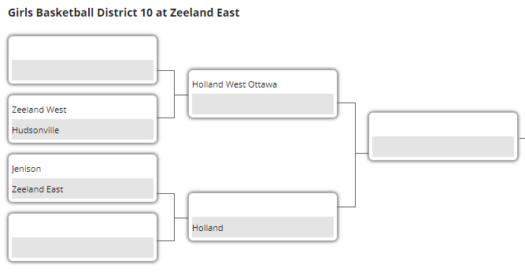 It has been a season to forget for Holland. Despite good play from Faith White and Angel Smith, it has been a difficult season for Holland. Holland raced off to a 3-2 start with wins over Forest Hills Eastern, Godwin Heights, and Kenowa Hills. However, in the year 2019 Holland is 2-13. One of those 2 wins came against rival Zeeland East. At the conclusion of the regular season Holland has finished with a lackluster record of (5-15).

Fortunately, Holland has earned a first-round bye in the district tournament and will play the winner of the Jenison vs. Zeeland East matchup. Should Holland face Zeeland East that game will be their third matchup. Both teams won their away contest on the other team’s court. Jenison and Holland have yet to face each other but Jenison is a much better team. Despite having a bye, it is looking like Holland will go home early this season.

Unlike Holland, Zeeland West did not have a strong start. Zeeland West started 1-4 beating Coopersville. Zeeland West never really got anything going after that start. They beat rival Zeeland East by three points. They also took out Holland twice. All-Conference nominee Kaylee Bakker has done a lot for this team all season. Bakker

will need to do even more for them if they plan on winning. Despite an all conference level season from Bakker,  Zeeland West’s strength of victory is not impressive as they do not have a single win against a team with a winning record. They are (7-13).

Zeeland needs to get through Hudsonville in the first round. As hard as that is, if they do that they will face West Ottawa for the right to play in the district finals. Zeeland West opened the season with an 8 point loss against West Ottawa. Zeeland West is unlucky with their district matchup, and it is highly likely Zeeland West will face the same fate as Holland.

Zeeland East started the season 4-2 including a double overtime victory against their first round matchup Jenison. Zeeland East has managed to get a decent amount of wins this season. However their only issue is they cannot get it done against their conference foes.

Their 3-9 record against OK Green teams is not good,  especially when the district bracket features better teams. Nothing jumps out about this Zeeland East team as they have had the definition of a mediocre season. They have managed to split their season series against Zeeland West and Holland. With one game to play, Zeeland sits at (8-11).

On December 13,Zeeland East knocked off Jenison 57-54 in double overtime. Many fans are hoping for an exciting matchup between these two and that might just happen.

Should Zeeland East win they will take on Holland. They beat Holland and also lost to them. However Zeeland East is hosting the whole district tournament and will be playing on a familiar court. If Zeeland East can get past Jenison, they have a good chance of playing in the district finals. However, if they lose they will watch as another team claims the district 10 trophy on their court.

Jenison got the best of them by 6 in their first and only regular season matchup. Jaci Tubergon has been one of the key players for Hudsonville this season. Hudsonville could see both of these teams in the district bracket and it will be interesting to see who wins. They have managed to post a 6-6 record in the treacherous OK Red conference and sit at (11-9) as they closed out their season on a two game losing streak.

Hudsonville faces Zeeland West in the first round. This game will feature two very solid players including Zeeland West’s Kaylee Bakker and Hudsonville’s Jaci Tubergon. Hudsonville only has four more wins then Zeeland West; however, Hudsonville has had to deal with much harder competition including teams like Grand Haven, Rockford, and East Kentwood.

Hudsonville is probably the most underrated team in this district and should be able to send Zeeland West home. Should they do that they will face West Ottawa for the third time this season. This game will send the winner to the district finals and should be a good one.

Jenison is the hottest team in bracket. Jenison was 4-5 around the halfway mark of this season. At that point a district run wasn’t even a thought for them. Zeeland East had knocked them off in over time and they had barley knocked off Hudsonville by 6. After that loss to Muskegon, Jenison started stringing wins together going 9-2 with their loses coming to Muskegon and Hamilton.

Muskegon has owned Jenison all season however, Jenison won’t have to worry about Muskegon in the district bracket. Freshmen Ally VanTimmeren has been on an absolute tear this season and will be a huge part of a district run. Jenison is 1-1 against teams in this bracket and they have a lot going for them. Jenison is (13-7) with all 20 of their games played, which is good enough for the second best record in this district group.

Their Path To The District Title.

Jenison gets their rematch against Zeeland East in the form of a first round matchup. If Jenison wins they face off against Holland. Assuming Jenison can beat Holland they await the winner of the Hudsonville West Ottawa and Zeeland West side of the bracket. Jenison is on the weaker side of this bracket and should have an easy time getting to the district ten finals.

Coach Paul Chapman has done an exceptional job with the team this year. Five seniors are currently spending their fourth year on varsity with a lot of young talent developing under their wing. Senior Natalie Dunn has had a very good season and even managed to reach the 1,000 point mark in her four year varsity career. West Ottawa like

Hudsonville is 6-6 in the OK Red after losing a thriller to Hudsonville.  West Ottawa started 5-0 and looked to own the OK Red. However, three games later they sat at 5-3. After that start things started looking up again including a two point win over 12-0 Grand Haven. Since that game West Ottawa is 6-2. Their regular season concluded with a 5 point victory and their final record is (14-6) giving them the best record in this district bracket.

West Ottawa has played and beaten every team in this bracket. They’re 4-1 with the lone loss coming to Hudsonville in overtime. West Ottawa will await the winner of the Hudsonville vs. Zeeland West game. They have yet to play Jenison; however, there is a very good chance these teams will meet in the district ten championship. West Ottawa has probably the best odds to make it to the finals with only one team in their way. However, winning will be a different battle.