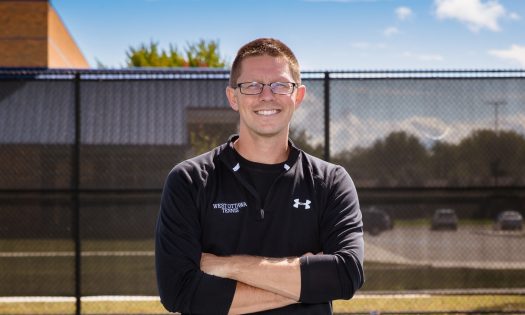 “I didn’t want to just be a dad, I wanted to be a super dad, and I didn’t feel like I was earning any super dad awards,” Instructor Pete Schwallier said, who recently resigned as Boys’ Varsity tennis coach. Schwallier has been thinking about stepping down for the past five years. The idea started when his son was born. “When Landon was born, five years ago, that added extra desire to be home more, and two years ago, when Avery was born, that amplified it.”

There were many times at the tennis courts when Schwallier’s children would run around and throw tennis balls with the teammates. It was not hard to see the love he had for his kids. He wanted to be with them so badly he would bring them to tournaments just to be able to spend more time with them. “For the last couple years, I knew that it would be necessary for me to drop down from at least one of the teams. The next question became: which team was it going to be?” Schwallier has coached both the boys’ and girls’ teams; he faced a difficult decision.

As a math teacher, Schwallier has the summer off of work in the classroom. Although he has three months off, the month of August is still taken up by the boys’ tennis season. “I recognize that it’s a luxury to be able to spend August with the kids that many parents don’t have, but it’s a luxury I want to take advantage of, especially when they are so young.” It was not a choice of picking favorites, but a choice that determined how much time he had to spend with his kids. Since the boys’ team runs into the greater part of August and beginning of school, and the girls season ends before school ends, he knew it had to be the boys’ team. “By making it the boys’ season that I step down from, that adds a whole extra month that I can be the primary person taking care of my kids, which is how I feel it should be.”

Another side of this choice is to improve the girls’ team as much as he could. “There have been several times over the last ten or eleven years of coaching where I’d be like, ‘Wow, if I did this, it would make the program so much better,’ but I can’t do that while I’m the coach of both teams.”

Since the girls’ middle school team practices in the fall and the Girls’ Varsity team practices in the spring, Schwallier will be able to spend time coaching both teams. “If I had another coach for boys, in the fall once or twice a week, I could go to the middle school and run drills with the girls.” If this were to happen, the girl’s middle school team would be able to excel and learn more before they came to the high school, which would allow our high school girls’ team to be even better once they reach high school. “My hope and belief is that we have a person replace me and that both of us can start doing those extra things that we can only have with two separate varsity coaches.”

Schwallier loves the boys’ team and appreciates everything that the team has accomplished and how much the team has grown over the past 11 years. “Some of the most memorable times that I’ve had in my life, I spent with those boys and the parents, inside the lines of those courts.”

Schwallier explains that his main focus on his tennis teams used to be to win, but as he grew as a coach, he realized that this was not the point. Over time, he switched his focus to the players. “Switching your focus away from winning and to players has ironically made our teams much more successful.” Of course, every coach wants their team to win, but over his years of experience, he learned that building strong and happy players is worth much more than a state title.

Not only does Schwallier appreciate the time that he spent with the boys’ team, but the boys appreciated him too. “Schwallier has been an amazing influence for me over the past fours years I had him as a Varsity coach. He always pushed me to be the best I could be and always made me feel like a special player,” Sr. Travis Bethke said. “I respect Coach Schwallier for everything he has done and appreciate all the cheering and support over my four years. Although I am disappointed to see such a terrific and admirable coach step down from his head coaching role, I think it will be a good change for him as he focuses on different aspects of his life.”

It was not a pleasant choice that Schwallier had to make about stepping down from the boys’ tennis team, but a choice that would better his relationship with his children. Although this choice was upsetting for many of the boys on the team to hear, each player understands the reasoning behind the choice, and is excited for a new experience with a new tennis coach next fall.