Compelled to make a difference 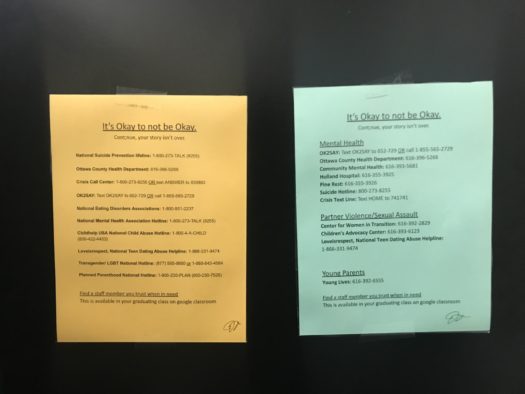 As I walked into the school bathroom, I noticed a new set of posters hanging in each of the stalls.  Despite the odd placement, I dismissed the posters thinking they were just another school event being advertised.  I walked back to class still curious why there would be papers hung up in the bathroom stalls. My curiosity got the best of me.  When I finally stopped to read the colorful papers, I realized that they were a lot more than just the typical school poster.

Just before the posters were put up, the school had announced the passing of our beloved classmate and friend Soph. Kayla Atsaphanthong.  This moment of tragedy led a high school student to create a bold and effective program to improve her school.

The school needed help.  Hundreds of mourning students walked the halls all the while trying to hide their true emotions.  School became a sullen place without our dear friend. It was filled with lonely kids crying silently in the bathroom, hoping nobody would find them because all they wanted to do was disappear.  We needed a lifeline.

Soph. Anysa Segovia was that lifeline.

Segovia had been good friends with Atsaphanthong.  She retreated to the secluded bathroom stalls when the pain of losing her dear friend became too much to handle.  As she cried alone, she thought about all the other students who also come to the bathroom in hopes of blocking out the world.  That was when she decided it was time to take action.

“Right after Kayla had passed away, I kind of felt like our school needed more help,” she said.

In only two short months, Segovia had put together a set of posters that could possibly impact the lives of hundreds in our school.

On the top of each of these posters, the saying “It’s Okay to not be Okay” is displayed.  The short but powerful phrase is there to remind students that whatever they’re feeling is okay.  Segovia says “it’s always important to know that it’s ok to not be ok. It’s ok to be depressed and it’s ok to be upset or it’s ok to be happy or any way you’re feeling, it’s ok to feel that way as long as you get help and you deal with it in an appropriate way.”

Just below the previous saying, Segovia also included another powerful sentence.  She wrote “Cont;nue, your story isn’t over.” The semicolon is a popular symbol that stands for suicide prevention.  It represents a place in writing where the author could have stopped but they chose to continue writing. Segovia includes the saying to show that when there could be a possible ending in life, there is also the opportunity to keep going because life is not over yet.

Segovia’s posters include multiple phone numbers that students can call or text to receive help.  On one paper there is a hotline number for every problem or way of life that someone might struggle with.  The other paper has all of the numbers for every mental health resource nearby.

The specific colored paper Segovia used demonstrates just how much thought and care she put into her project.  Pine Rest, the nearby mental health clinic, has always had a theme of green and yellow. These colors are supposed to represent happiness.  “I thought if we were to put that on the posters, it would promote happiness for people who see it,” she said.

Her hope behind the “It’s Okay to not be Okay” posters is that Segovia will be able to guide others to get the help they need.  “I felt like I couldn’t help my friend so I thought if I couldn’t help her, I could at least help others,” she said. “I hoped that people would use it to their advantage and get help and no one else would have to go through what my friends and I went through.”

The meaningful posters generated many contrasting types of feedback.  Similar to most posters that are hung up in schools, many were torn down or written on.  Students generally don’t take the time to read school posters because of the annoyingly redundant advertisements displayed on every single wall.  Segovia’s hope is that students will stop the mistreatment of such an important project, and let others who truly need the help be able to access it.

West Ottawa High School Wellness Coach Kristin Douma said, “I think the posters are helpful.  Any resources that we can get out there for students, the better. I also think that it’s really important to address that stigma around mental health, so by having those up and normalizing it and making it seem like this is a really common thing that all students are dealing with, helps make students be more comfortable utilizing the resources, so I’m definitely in favor of those being up.”

With every student having access to the resources, and the posters being displayed in a public place, mental health issues are being normalized in our school.  Students are starting to realize that in today’s society, it is a common thing for teens to struggle with mental health. The posters have done a surprisingly good job of making it more acceptable to be open about these issues.  “I would definitely keep them up, in fact I think we could probably use more of them” Douma said.

Wellness Coach Danielle Barnes also believes that the posters are important to our school.  “I think the posters at school are very helpful for our students because it sends the message that students are not alone in feeling emotional pain or any kind of strong emotion and that feeling, recognizing, or getting help for our emotions is okay.  We should not feel ashamed or weak for having those feelings.”

Like Barnes said, all feelings are valid and these posters help show students that it’s okay to have these feelings as long as they are being handled in the right way. She believes that struggling with mental health does not show weakness, understanding that you need help shows great strength.

Barnes also said, “I also really like how the posters remind students to continue their story as it’s really difficult for students to take a step back and realize what their bigger picture is while they’re in this early exploration phase of their lives. Thus, continuing their story is an important message to help them realize they do have a purpose, they just need to continue living and writing the next chapter. Finally, the posters are even more effective because they provide resources that students can use to initiate the process of getting the support they need.”

Similarly, School Counselor Phil Spreitzer said, “I think they’re helpful because giving people resources empowers them to be able to take action on what their concern is and especially if they’re thinking of hurting themselves, it’s good that they don’t and it gives them opportunities to get help.”

The posters have been a tremendous help for many struggling students within the past year.  Segovia says “There’s a lot of people that have come up to me and said that they did use the numbers and that it really helped them realize that there was someone who cared.”  These two simple papers have shown students that they aren’t alone and people really do care.

With the help of some friends and the WO Renaissance team, Segovia has made a dramatic difference in the lives of many students.  She has helped people in ways that nobody can imagine with such a simple project about a very important issue in schools today. The small but impactful posters show students that when they feel alone and they go to the bathroom to escape the struggles of life, there is still a way to get help.  There is always someone who cares.

Segovia was determined to make a change in our school and she did just that.  Students now have easy access to any resources if they need help and they are reminded constantly that it is always okay to not be okay.  Although she has gone through many rough patches, Segovia believes that life is truly an amazing thing and has made it possible for so many other students at our school to get help and realize that too.  Everyone deserves life and was given the gift of life for a reason.

A place once used to escape is now used to strengthen, thanks to one bold high school student who wanted to make a difference through her own suffering.