US soccer training is inadequate 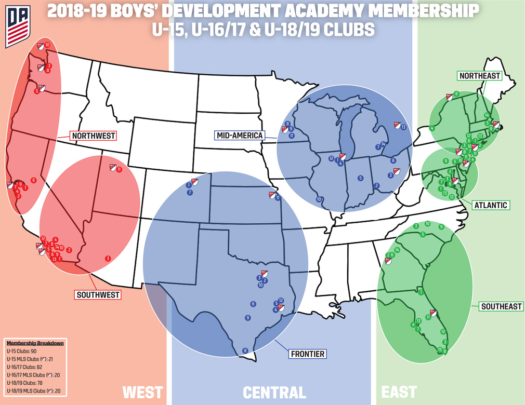 Ostfildern, Germany is a town of 35,612, comparable to Holland. A 16-year-old athlete in Ostfildern grew up with a passion for what is often referred to as the beautiful game,  soccer, and wanted to be the best in the world. He had the drive and commitment to succeed, so he joined VfB Stuttgart Youth Academy of Stuttgart, Germany, 20 minutes away from his home. The academy has state-of-the-art facilities that include artificial and grass fields along with gyms and lounges.

He started off his mornings with individual training followed by school.  He continued his day to work individually on his soccer skills in the afternoon and ended with team training from 6-8:30. Experts ranked the team in the top three in Germany.  The 16-year-old knew that to become the best, he had to make these diligent sacrifices.

His name is Sami Khedira.  He is now one of the top players in Germany and plays with the giants of Italy-Juventus.  He started off as a youth player at Stuttgart along with playing for the youth German national teams throughout his childhood. He then played for the Stuttgart second team and after continued hard-work, he made his Stuttgart first team debut in 2006.

After six years at VfB Stuttgart, Spanish team Real Madrid showed interest in the youth player.  He signed a contract with them in 2010. After signing the contract, Khedira was a starting center-back for the Spanish giants and scored six goals in his 102 appearances.

Ray Mackey, a junior at West Ottawa, has the same ambition and drive to become one of the best soccer players in the world. He spends his mornings at school and drives to practices in the evenings. He drives 25 minutes to his practices in Hudsonville for his youth soccer team, Michigan Fire Juniors. His team practices three times a week for one and a half hours.  His team consistently finishes in the top five of the Michigan Youth Soccer Association State Cup tournament.

The country that Mackey wants to represent one day struggles on the world stage because they do not train their youth talent like Europe.

The abilities of 16-year-old Sami Khedira are substantially better than Mackey. He sustains better technique and soccer IQ. His technique is a result of the hours of time he spends on the ball every day; his IQ is shaped by the coaching he receives, and in result he is a an overall better player than Mackey.

The players of United States Men’s National Team (USMNT) were trained in the US youth soccer system, the same system Mackey is a part of today, and they continue to disappoint US soccer fans across the country. The most recent disappointment was failing to qualify for the 2018 World Cup in Russia, which was a result of a final loss to Trinidad and Tobago.  All the team needed to do was win or tie against a side from a nation that is 300 times smaller than them, and they would have punched their ticket to the World Cup.

Furthermore, The USMNT, despite being is the third most populous country in the world, is ranked 25th in Fédération Internationale de Football Association rankings.

The problem that creates this dissatisfaction is a result of the youth system the US has created. The system when compared to those of other countries like Germany, is pitiful. The best soccer players in the US are not training similar to and are not having the same experiences as those of European academies such as Germany.

There are youth soccer academies across the US which are more comparable to European academies than Mackey’s team, but there are not enough to accommodate  all the kids who could be and have the drive to be the best players in the country.

The US Soccer Developmental Academy (USSDA), founded in 2007, was a serious but imperfect step towards better youth development in the US.  One flaw comes from the lack of teams in USSDA. There are 150 teams in the system, but there are still 19 states without an academy. The shortage of teams creates a lack of opportunity for many teenagers who want to play the game at the highest level.  In addition, these teams still do not have the coaching and similar practice time comparable to the European academies. Most academy team’s practice 5 days a week for two hours a day.

The USSDA was an attempt to replicate the European model, and although it was closer to the model; it is not to the place it needs to be for the US to compete against the top teams in the world.

To be the best, the US has to train like the best and currently, they do not. The poor play of the team is the effect and it results in the losing that, many nationwide, are let down by.