Battle of the drinks

Enter a supermarket or gas station and dozens of different types of sodas, Gatorade, and other drinks sit in coolers ready to be consumed; however, the variety in flavor can be surprisingly underwhelming and lacking. Not many stores have drinks outside of a few main flavors that have become staples everywhere or drinks that offer different nutritional values or sensations. Even specialty drink stores do not have everything a customer wishes for. So today, in a search of something new and exciting, four students took the drink brewing into their own hands. They meticulously crafted their drinks and then presented them to the other contestants for judging on a scale of one to ten to see whose idea may be the one to occupy store shelves.

Noah: Since the beginning of time, one of my favorite fruits, clementines, has been in the shadow of their big brother 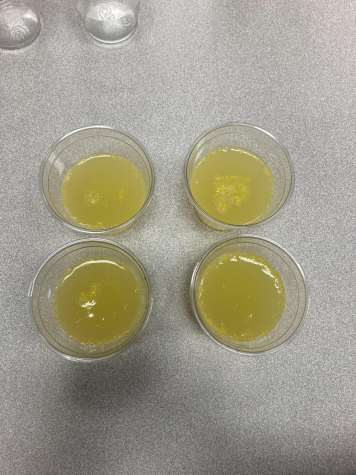 oranges, who have countless drinks and products made after them; today, I aim to flip the script with my clementine vanilla soda. I started by making a simple syrup of a half cup of sugar and ¾ cup of water as well as three chopped-up clementines. I cooked this over the

stove for 10 minutes extracting the juices as I went then strained it off into a jar. After adding a tbsp. of lemon juice and 2 tsp. of vanilla extract to the syrup I refrigerated it overnight. When I was ready to serve I mixed one part syrup and three parts seltzer.

The mean score that this drink reviewed from the other contestants was 7.3. They enjoyed the different tastes that clementines brought to the table while still retaining a similar taste to an orange. And although the drink received generally positive reviews, I think I could’ve made it better. I think I added too much vanilla extract that made it taste more like the clementine was a compliment to the vanilla than the other way around. Contestant and judge Jr. Sam Ramirez said “It tastes more like a dessert than a drink.” I also believe that I could’ve used a finer strainer to keep more pulp out of the syrup for the drink. Even though the drink was received well I don’t think clementines will be forcing oranges out of the spotlight in the drink section anytime soon.

Sam: After years of munching on sour candy, I have developed a craving for the extremely sour; however, what they offer in the common gas station can’t satiate my craving anymore. That’s when I remembered when four years ago, Wolfe, a popular Youtuber, made a legendary video making the most extremely sour drink. 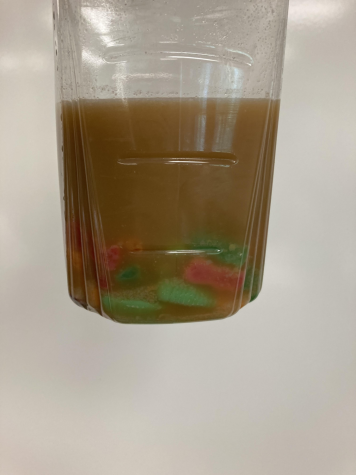 Taking inspiration from his video, “Sourest Drink In The World Challenge!! (Extremely Dangerous),” I crafted my own sourest drink in an attempt to satisfy my sour craving.

For my drink, I used two bottles of pure lemon juice for the base. I then added a bag of Trolli Sour Brite Gummy Worms, a bag of Sour Skittles, a bag of Sour Patch Kids, and 5 spoonfuls of Airhead Sour Apple drink mix. Immediately after mixing, the drink was a bright greenish-yellow color that I left to absorb the candies’ flavor overnight. However, when I woke up in the morning the liquid had turned into a disgusting brown. Upon further examination, the skittles had almost totally dissolved causing this terrible color.

After tasting this sour concoction everyone’s face squinted in unison as they simultaneously experienced the awful sensation. Jr. Noah Boggs said, “I would not wish this feeling on my worst enemy.” Although possibly the sourest thing Noah, Brady, and Will have ever experienced, they all agreed that if one could get past the sourness, the flavor was not too bad. Despite this, this sour brew received a rating of 3.66 on average making it the second-worst drink out of the four.

Will: Arnold Palmer was one of the greatest golfers to play the game. Winning 7 major PGA championships along with 55 other PGA championships led to him being inducted into the hall of fame in 1974. There’s one other thing that he is known for besides his dominant golf career. His signature drink. Named after himself, it is a mix of half iced tea and half lemonade. 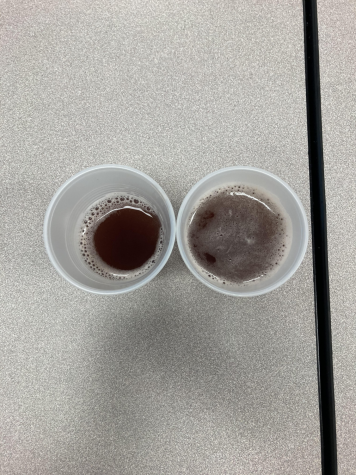 The Arnold Palmer drink is one of my favorites and since I also work out and have been introduced to supplements like pre-workout, it made me start to think. Could you make an Arnold Palmer pre-workout mix? Not being readily available in stores for purchase by itself, I took it into my own hands.

I started out by buying Arms Race Nutrition, Hardness Lemon Rush pre-Workout powder. I wanted a sweeter-tasting drink so I bought Pure Leaf sweet tea to mix it with. Following the instructions, I poured out 16 ounces of sweet tea and put in 2 scoops of the lemon pre-workout in it. I then mixed in a shaker cup until the powder was fully dissolved in the sweet tea.

After the endless mixing, it came time for the taste test. The mixture looked completely normal as the dark brown green tea hid all colors. We all took a drink and to our surprise, it mixed together better than we thought. One thing we noticed right away was how sweet it was. I used sweet tea for that sweetness flavor but realized that may not have been the best choice as normal Arnold Palmer is made with unsweetened tea and that may have been the correct route to take. Another issue was that the lemon flavor was not super strong. The pre-workout mixture is energy first and tastes second. The lemon flavor was very weak and it seemed as if it were not there part of the time. It was suggested to me that adding lemonade packets to the mixture would help it as that is all about flavor. That would give it a stronger lemon flavor to reach that true Arnold Palmer taste. With an average score of 5, we all agreed that it wasn’t terrible but needed that aforementioned work to make it better. If you are a fan of the drink Arnold Palmer, I highly recommend trying this for yourself if you’re looking for a pre-workout drink.

Brady: During last year’s NFL draft, there was a feature about one of the draftees that stuck with me. Ben Bartch, who was drafted to the Jacksonville Jaguars in the fourth round as an offensive tackle, obtained his claim to fame by the smoothie he drank daily that allowed him to gain 86 pounds in four years. 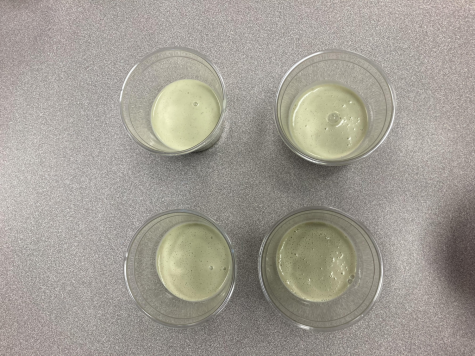 This smoothie consists of: seven scrambled eggs, cottage cheese, grits, peanut butter, a banana, and Gatorade. And although I thought this would be overkill and unenjoyable for me, there were no similar products on the market available that could give me this much caloric value in one drink. So, using his handcrafted recipe, I tested to see if the smoothie tasted as repulsive as it sounded or if drinks like these could be supermarket staples.

The first thing I noticed about this drink was it appeared chunky as I was pouring it into separate cups. Already despising drinking the concoction, this did not help at all. The drink reeked of peanut butter and Gatorade. The smoothie was an ugly green color. Everything about it screamed disgusting. We all sat around, waiting for someone else to take the first sip. Noah finally volunteered and took a tiny taste. That was all he needed. His mouth recoiled, and he looked like he was attempting to stifle throwing it back up as he stated “wow, that’s awful”. The rest of us looked at each other and took a small sip. Similar reactions to Noah’s spread across our faces. The taste matched the smell, with a strong peanut butter flavor. This drink gained an average review of 1.3, and we all agreed this was the worst drink by far. I give Ben Bartch major props, as there is no way I would ever be able to drink this for multiple years.

After these students gave their hand at crafting drinks it’s safe to say none of these will be making store shelves anytime soon; however, this doesn’t mean the drink market shouldn’t be opened to more flavors and types of drinks that are readily available. The drink market is bottlenecked on a few main flavors and needs to expand and keep innovating if exciting and new drinks are to come out.