“I believe it now” 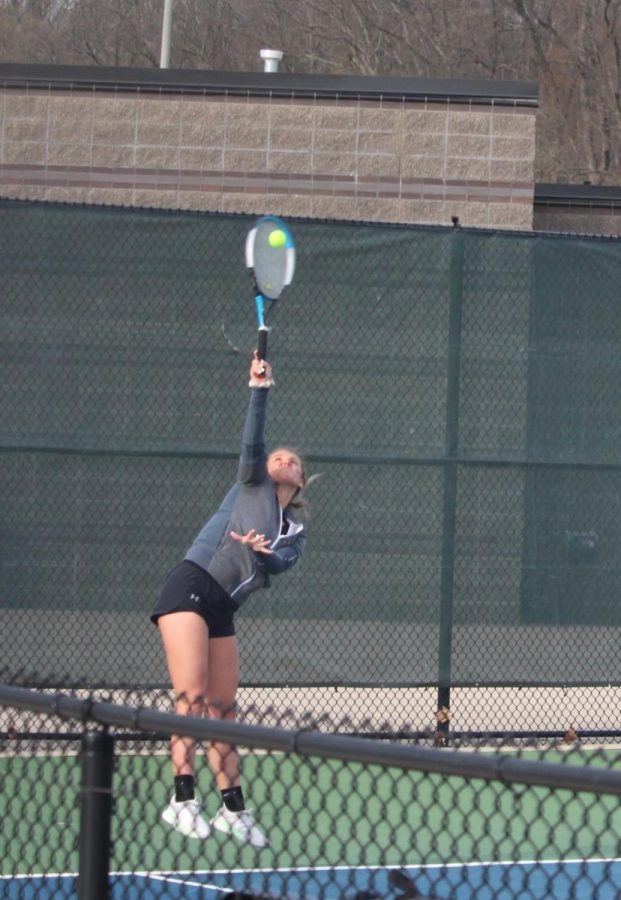 Everything happens for a reason.

Sr. Adria Hamilton has said this phrase since middle school. If she received a bad grade on a test, she would remind herself, everything happens for a reason. If she lost a tennis match, she would tell herself, everything happens for a reason. Up until her sophomore year, that is as far as this phrase went. It was a phrase she often said but was never really forced to believe. That is, until May 3, 2019.

In the days, weeks, and months before May 3, 2019, tennis filled Hamilton’s life. Her freshman year, at fourth doubles, she had a record-breaking season with her partner Sutton MacInnes, racking up 25 wins and only eight losses: the most ever at that flight.

Hamilton was brimming with potential and was driven to improve. “After having a record-breaking season I realized like wow, I really want to get good at this sport, so I started training at Hope College at least three times a week. And then I did SummerLong Academy, which was five hours a day, five days a week, and then an optional another two hours at night Tuesdays and Thursdays,” she said.

Hamilton invested her time and energy into training all summer. She worked on her backhand, her serve, and her topspin throughout the summer, but no training could prepare her for May 3, 2019.

The Panthers faced the Caledonia Scots. The match started off as expected, with Hamilton dominating the court. Halfway through the set, Hamilton planted her foot to hit a backhand lob. The ball soared over the net, but when she started to move, her knee locked and twisted. She hyper-extended her knee and her ACL was torn in half. An agonizing scream turned every head at the tennis complex. Her entire body fell to the ground and with it what felt like her entire world. How could this have happened for a reason? How could such excruciating pain happen for a reason?

The pain in her leg was nothing compared to the pain of knowing her tennis season was over. In the days after her injury, Hamilton was angry. “Why me? Why would this happen to me?” she would ask herself. A torn ACL meant surgery, physical therapy, a nine-month recovery, and a feeling of hopelessness that she had never encountered before. Hamilton explains that “Mentally it was way harder than the physical battles because it felt like having this dead-set timeline of nine months ‘like you need to get this done in nine months’ and it was hard to push myself and stay motivated because nine months is a really long time to recover.”

Hamilton was inclined to pull away from the team when she felt like she was no longer contributing. It was a battle each day to show up at practice and tournaments to support her teammates. Watching her teammates enjoy the one thing she wanted most was a lot harder than she expected.

The pain, the recovery time, and the mental battle that comes with a life-altering injury, understandably drives many injured athletes away from their sport and team.

Jr. teammate Halle Pratt said, “After she got her surgery, I remember going to her house to give her ice cream. Even though she had just gotten surgery, she still had a positive attitude, which was amazing to me. How could someone still be so positive after something so terrible? I realized that’s just the type of person Adria is.”

She made the choice each day to take a step forward and motivated herself towards improvement. Girls Varsity Tennis Coach Pete Schwallier said, “Following her ACL tear, in typical Adria form, she faced what would understandably demotivate a typical kid, but her response earned the respect of every player, parent, and coach in our program. Setting aside the things she could no longer do, she poured all of her energy into things she could. She rehabbed her knee every single day and did every weight lifting move or exercise that she could safely perform for the rest of her body. When her junior season began, Adria retook the court stronger than ever.”

After nine months, everything about Hamilton was stronger, including her mind. This proved to be fundamental for Hamilton to make it through the next obstacle in her way.

Just when Hamilton was beginning to take her first steps back onto the court, her junior season was canceled due to the pandemic. While she felt the same frustrations as most spring sport athletes, Hamilton had a mature perspective because her injury had already pushed her to find the good in every situation. Hamilton said, “Even though I didn’t have a junior season, I felt like I was able to heal a lot more. If I would have gone straight into my junior season after tearing my ACL it would have probably hurt me even more because during quarantine I was able to heal longer and it kind of validated my mantra that everything happens for a reason. It has made me know that not everything is set in stone in life. You can go through different paths but still end up getting to where you want to be. I learned to continue to work hard for what you want because that will always pay off.”

This statement could not ring any more true. Hamilton’s hard work is definitely paying off, and she is now exactly where she wants to be: on the tennis court and killing it.

Schwallier said, “Adria has improved in every way possible since her freshman year. As a freshman, she was in good shape, but not in a way that stood out. Today, she’s probably one of the fittest athletes I’ve ever coached.”

Everything happens for a reason.

Without her injury, Hamilton wouldn’t be the same leader she is today. “Our team is very young and I’ve used the strength that I’ve grown into as a person from my injury to become a better leader and to help younger teammates to know that they are strong enough to do whatever they put their mind to. I’ve become so much more positive out on the tennis court and just in life in general,” Hamilton said.

Her positivity and leadership is not only noticed by her teammates, but it inspires them to reciprocate. Pratt said, “Adria is always bringing a positive attitude to the court. She is always cheering on the team and making sure everyone is included. If someone is playing and no teammates are watching them, she always goes over to watch them and encourages everyone to go watch them too. She is a leader on and off the court. I strive to be the type of leader that she is.”

Hamilton left the Caledonia courts on May 3, 2019, and feared she would never play tennis the same. As it turns out, this statement proved to be true, but not in the way she originally thought.

Hamilton is not the same tennis player as she was her sophomore year. Rather, she is far stronger and more confident than she was before. “As a freshman, the pressure of tough matches would at times make competing at peak level difficult for her. Today, she is playing our top doubles spot, and regularly beating the area’s best competition when the pressure is on.” She emits a new manner of positivity and leadership, “She not only makes sure to find joy in simple things, but she spreads it to the people she’s around.” Hamilton allowed her injury to change her for the better, Schwallier explains.

When Hamilton steps onto the Caledonia courts one last time for the 2021 OK Red Conference Tournament, it will not be the same girl who stepped on those courts two years ago. She is a stronger, more confident leader who believes, Everything happens for a reason. Hamilton said, “I’ve been saying that phrase since middle school, but my injury has helped me grow into rather than just saying it, I believe it now.”