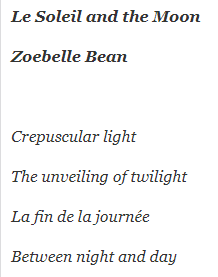 This past year and a half has been crowded with so many different circumstances; as a result, people have been battling with new experiences, and what better way to process everything that has happened recently than getting it all out through poetry?

Choosing a top four from the 56 poems entered in the competition proved to be quite difficult. Ultimately, Instructors Kristen Bentley, Ann Kirkendall, Chris Norton, and Ken Strobel narrowed the poems to a top four.

3rd: Poems and Pieces From the Heart -Gionna Bean

4th: “What I Live For” -Shylah Dozeman

“What I Live For”

I live in a box

Stuck in the same place

Five days of the week

The weekend is full

Full of the sleep I missed and

I stay in this box,

For my future self

Where my life is more than school

My husband, Children, and love

For my future job

To help my community

To heal the broken

“Think outside the box.”

“Don’t plan for the future.”

“Live in the present”

I live for myself

And not for other people

So I live in my future

Poems and Pieces From the Heart

Poems and pieces from the heart,

They drive the soul to wonder

What the world would be

Were men colorless and bleak

Would this world be right

Where nowhere is bright

Would we find common ground

In this prison with no sound

Rhyme and rhythm drive the heart

They soothe the searching soul

Every artist plays a part

To make this painting whole

A world of creativity

As far as the eye can see

Imagination is my captivity

Without which, I wouldn’t be

I wish I wasn’t so high-strung

Instead of growing old, I fear

I’ll die of becoming too young

Each new idea is a home

Each new dream, a game

Yet my mind’s becoming foam

It shall never be the same

Where do I go, now that I’m lost

Where do I go, when I’m so far

Shattered memories glaze over with frost

I don’t know who you are

You came to me as a friend

Your promises were laced with gold

You betrayed me in the end

I don’t know what I’ve been told

I sift through the wreckage

Of my precious and broken mind

Imagination, you said, was a message

That would save humankind

Yet, I know now why you try

To play this wicked game

Yet I shook your hand all the same

Forevermore will I repent

And in the lonely, dark night,

Recall the agony of that moment

Which will never leave my sight

There were so many beautiful poems submitted with so many beautiful messages, but this next one spoke to the judges. Le Soleil and the Moon is a poem derived from the love Zoebelle shares for French, astronomy, and particularly moonrises/sunsets. “I decided that it would add a unique perspective to the poem if I added elements of French to it, allowing the poem to feel like a combination of something foreign but also familiar because I was describing something which most people have experienced or heard of before- a sunset and a moonrise.” Zoebelle also described how she wanted to incorporate the feeling of the sun and moon being related like friends and family.

Le Soleil and the Moon

The unveiling of twilight

Between night and day

Reflecting in my windowpanes

Went down, beyond the horizon

On the mountaintops it alighted

Look away, I could not

It set fire to the layman’s soul

An eye peering through a keyhole

The locket of my heart was set free

It splintered my mind, touched

My consciousness, the remains clutched

In the arms of a broken man

Across from this, a shiny slip of a dime

Beating against the shores of time

The king of a faraway kingdom

It hung, barely visible in the dusky light

The sun giving character to his face

He smiled down fondly at the terrain below

A crack in his surface for every year he knows

He left without goodbye at the dawn of each day

Quintessential and flawless, with grace to show it

He provided an escape from every sad moment

The judges appreciate Zoebelle’s work. “I loved her thoughtful word choice and how she sprinkled French into it,” Bentley said.

Kirkendall appreciated how clearly crafted Zoebelle’s piece was. “So often, students think that beautiful poetry just happens, that a poet is inspired, writes a draft, and the poem is then done. That’s not how writing works. Le Soleil had an attention to detail that was missing in many of the other entries,” Kirkendall said.