We survived five days of only classical music 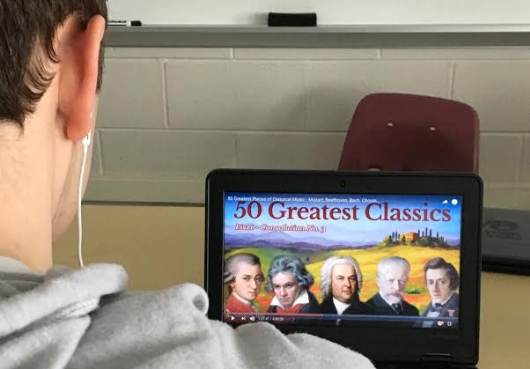 “What is this? Put on something different,” our friend told us as we get in the car. We explained that for five days straight we could listen to only classical music, nothing else. Even during the short car rides to and from school, our music was classical. “Are you joking?” We weren’t. We couldn’t play anything else.

We could have chosen any type of music that we don’t listen to.  However, we chose classical music because it is stereotyped to be the most boring, which made it perfect for our experiment.  We wanted to see how the music affected our moods and behavior.

Since classical music is such an extreme step from the Drake or Migos rap music that we typically listen to, the reactions to our experiment were just that, extreme. Some people questioned if we were mentally okay, others just stayed silent and let us “torture ourselves.”

Before the experiment, we predicted we would become bored when listening to classical music. We first thought of classical music as slow, methodical, and repetitive. However, after listening for five days, we can confidently say that classical music engages us, and allows us to focus easier.

While studying or doing homework, we listened to the most popular classical pieces such as Beethoven’s “Moonlight Sonata.” At a tempo of 60 beats per minute, the song seems to drag on and on. Nonetheless, the soft sounds of piano playing up and down, relaxed us a bit more than we first expected.  While “Moonlight Sonata” is slow, methodical, and repetitive, it didn’t bore us, but helped us focus. We eventually realized that classical music is precise and consistent instead of slow and boring. During times when complete focus was needed, classical music helped us focus much better than our usual genre, rap.

We think the reason teenagers don’t particularly enjoy classical is there are a lot of stops, starts, tempo changes, mood changes, and a lack of lyrics. Yet the biggest turn away for younger people is the length of each song.  A normal rap or pop song will usually span two to four minutes, but a classical song can go on for fifteen minutes or more. Considering the attention span of the average teenager is low, a fifteen-minute classical song won’t fulfill their need for a faster-paced rap song that will hype them up.

Our favorite time to listen to music is while in the car, but listening to classical music in the car was easily the worst.

While driving, we want music that will hype us up, so when we arrive at our destination, like school or work, we can be motivated. With its fierce lyrics and quick beats, a fast-paced rap song is much more exciting compared to a soft and slow classical song.

After a while, we began to dread getting in the car. With friends, we would hear remarks like “this isn’t good” and “why are you listening to this?” which would only add to the frustration of having to listen to classical music. The car is supposed to be a time to enjoy company with friends, but classical music ruined that experience for us.

Despite being an absolute buzz kill in the car, classical music was actually quite useful while doing homework. Normally, our math homework packet would take around 30 minutes to complete, but while listening to classical music, we were each able to complete the assignment in just 20 minutes. The simple rhythms and the slow tempo of songs like “Moonlight Sonata,” helped us relax and concentrate on the homework. In contrast to the normal rap or rock music that we listen to while studying, classical music allowed us to focus with much less effort.

Since a majority of the classical songs were not familiar to us, and none of them had lyrics, we could focus better on our homework without the distraction of lyrics in our favorite rap songs. Generally, our first reaction when a favorite song of ours comes on is to pause and sing along, which distracts us from the homework we are supposed to be working on. With classical music, however, we didn’t know any songs, and there were no lyrics to sing along with so we could concentrate more on the homework at hand.

Overall, listening to only classical music for five days wasn’t as irritating as we expected. Yes, having to listen to classical in the car was frustrating at times, but in the end, we found that varying situations needed varying music. For homework or studying, a relaxing genre like classical suited us better compared to a faster-paced genre like rap or rock. While in the car, classical music didn’t satisfy us as much as when we were doing homework.

Ultimately, we recommend changing up your music. For situations where relaxing and focusing is necessary, a slower genre like classical will fit, but when you need to be energized, a faster-paced genre will fit better. After five days of solely classical music, we are left feeling refreshed and will continue to switch up our music selections to best fit the situation.