District basketball: One down, two to go 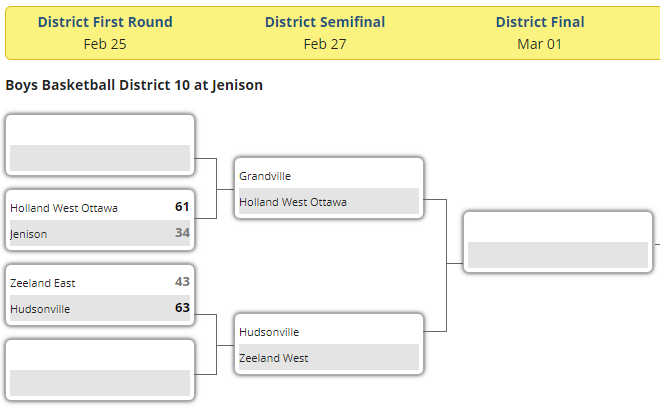 Down one early in the first quarter of Monday’s district game against Jenison, Shawn Trammel dribbled left over a Tanner Wiegerink screen. As Wiegerink rolled to the hoop,  Trammel  lazered a left-handed pass to him, leading to an and-one layup and a two-point lead.

The game was West Ottawa’s from that moment to the final buzzer.  The team went on to win by 32 in their best game all season. Wiegerink ended with 20 points and Jason Fairfield had 17. Trammel chipped in 8.

The team was 9-10 in the regular season this year. Even though the record was not what the team wanted, Derek McNitt said, “I believe that our team’s record does not reflect how much of a threat we are for districts.”  The Panthers proved themselves to be dangerous in their first game.

The Panthers face Grandville in the second round.  They are a team that West Ottawa is familiar with as they are in the OK Red Conference along with West Ottawa.  Grandville is 9-11 on the year and was given the bye for the District 10 tournament. They are led by Soph. TJ. Barnes and Sr. Freddy Baker.  The Panthers found success in both of their matchups against Grandville in the regular season. The first game was a 6-point overtime win earlier in the season and the second  a 3-point win last Wednesday.   West Ottawa primarily ran a man defense in both of their matchups and looks to see the defense continue, as they had much success with it. This third matchup of the season takes place at Jenison on Wednesday at 6pm.

West Ottawa does not know the team they will play in the championship if they manage to win their next game, but the heavy favorite on the other side of the bracket is 15-2 Hudsonville.  They won the OK Red and have defeated West Ottawa twice this season. The first game was a  6-point loss early in the season followed by a 14-point loss last Friday. Hudsonville is on a 13-game win streak despite losing Sr. Max Perez, out with a broken hand.  Last Friday, the teams matched up in a defensive struggle, but Hudsonville was hot from the three-point arch, and that was the difference.

Hudsonville won their first district game against Zeeland East on Monday by 20 points.  The Eagles once again, did not have any break out scores in the game, but they still handled the Chix with ease.  They now look ahead to 15-5 Zeeland West, led by Sr. Eli Steffen, Soph. Carson Gulker and Jr. Mason Bakker.  Zeeland West has not played Hudsonville this year and therefore is the only game in District 10 that is a fresh matchup. The Ducks will play the Eagles following the West Ottawa game.

The district championship game is at Jenison on  Friday at 7:00.