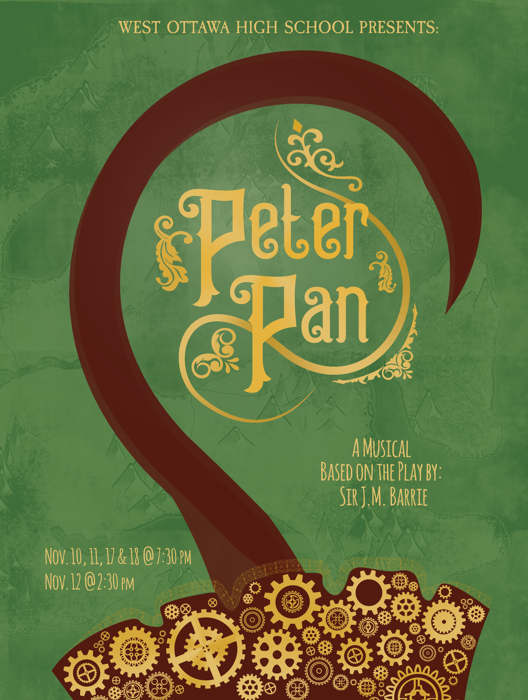 West Ottawa High School’s fall musical Peter Pan was a success. Both Friday and Saturday night were just seats away from being sold out, and Sunday was a full house.

People who went to go see it said it was a fantastic show and that the cast was made up of incredibly talented students who brought the story to life. From the pirates doing the tango, a tarantella, and a waltz to the natives and their fierce attitude and beautiful dancing at the start of act two. To the lost boys’ childlike nature and their playful remarks, all the way to watching jr.  Jaelan William’s character Peter Pan fly across the stage.

Despite all the wonderful things that happened during the show, some things didn’t go as planned. Not everything goes how we’d prefer, and we may need to go off the book to make sure it ends safely. Theatre is no exception. It might be a set isn’t in the right place, a prop doesn’t make it on stage, or the curtain gets stuck. And every now and then, people get injured.

Friday night, the cast’s adrenaline was through the roof. Act two, the lost boys were dancing in front of the curtain while a scene change was taking place behind it. As the curtain began to rise, it paused. The curtain got caught on the steel beam and wiring that was holding it up and raising it into the rafters, Backstage became chaos, crew running around trying to fix it as Sr. Aubrey Kavon and Jr. Tyler Zoerhof communicated via headsets in attempts to find out what happened.

On stage, the lost boys covered it the best they could, by continuing the scene and crawling under the curtain into the underground hideout. When the curtain finally gave way, crew pulled it up as fast as they could, crisis averted.

In act three, Jr. Ben Hoey who played Captain Hook and jr. David Dannels who played Smee were fighting sr. Elijah Kliphuis who played starky, when out of nowhere, Hoey’s hook flew into the air and across the stage. Not only was it not planned, but for a few seconds, no one knew what to do. Hoey made the call to let out a small yell and put his arm behind his back, and Dannels drove to the ground to grab the hook while Kliphuis ran up the staircase and dove off the plank onto the mat waiting for him below, as a crew member tossed water over the balcony onto Hook and Smee. Naturally, with the three of them being great actors, they were able to cover it up smoothly and the audience got a great laugh out of it.

Saturday night brought the Peter Pan into its second night of the opening weekend. It was in the middle of act two when the pirates and natives ran onto the stage to fight with each other, but one native was left without a pirate to fight. The moment before he was supposed to go on, the pirate got a bloody nose and went straight to the bathroom to stop it so it didn’t get all over his costume, or the stage.

In theatre, there is something called a trooper, more specifically someone. Where no matter when happens to them, they still continue their scene, soph. Connor Short was the trooper of Peter Pan. In act three, Short slipped on the water and fell onto his back, knocking the wind out of him. Despite not being able to breathe properly, if at all, Short got right back up and jumped right back into the fight and continued into the ending scene where he was then helped off stage by a fellow cast member. Short was then brought to the hospital where the hospital staff took X-rays of his ribcage for the possibility of fractures or breaks. After an hour, Short was discharged with a minor concussion and a minor cervical sprain (whiplash) but still performed the next day.

During the During the Sunday matinee, sr. Louisa Hall was practicing her dances during act one when her nose began to bleed. Luckily, she didn’t have to go on stage until act two, but never the less, getting a bloody nose during a performance is never a pleasant feeling.

The Pirates were a crowd favorite no doubt, they won the audience over with their unexpected tango at the start of act two. And now they were back again for another dance. “What tempo Captain?” Smee asked asked “A tarantella,” responded ed Hook. The pirates reveal what they have been hiding behind their backs, tambourines. And the number began. Half way through the dance, one of the tambourines lost one the metal disc and some of the leather siding, which was left onstage while the lost boys along with Peter, Michael and John started the next number “I Won’t Grow Up”.

On Friday night the cast received their notes from their vocal director, Erin Steir instead of director Joe Huber, for he was in Twin Cities for a family emergency. With the knowledge of having only a few seats left in the house, the cast knew that the stakes were high. Even though their director was not present, they still needed to keep the integrity of the show.

During the break the cast had between weekends, sr. Jayla VanMaurik had a major scare. While cutting up fruit, she stabbed herself, cutting through the muscle and tissue hitting the bone of her left ring finger. VanMaurik was rushed to the hospital where she had to get stitched and had a splint placed on her finger to protect it. But the show must go on, and she powered through the show Friday night, and danced her way through the rest of the weekend.

Also on Friday night, jr. David Dannels playing Smee got his sword stuck in the straps holding Hook’s bench to his back. While walking off stage, the sword detangled itself and fell onto the stage floor, unfortunately, the fight between the native and pirates was the next scene, and as the pirates were coming on stage, the sword was kicked away leaving Dannels confused as to where it wasn’t until his partner told him.

Saturday night, the final show was in full swing. The energy level was sky high, and the crowd was loving every moment of the show. Up until “I Gotta Crow reprise”, the show was running smoothly, and then it happened. Just like opening night, the curtain got stuck on its way down. Nevertheless, the cast and crew made due with it and went on with the scene change as planned. Right as the song ended, cast member jr. Gabi HAll noticed that the bench that Wendy, Michael, John and the lost boys land on was not in place and was still sitting on stage right. Quickly jumping into action she and one of the crew members picked it up and ran onstage to place it over its spike tape and running back off just in time for the curtain to rise up and for the closing scene to begin.

Peter Pan was without a doubt, exceptional. The music, and dances, the acting. It was all phenomenal. The audience truly could feel the passion and excitement that radiated off the cast while they were performing. And despite the mistakes and injuries that occurred during the shows, the experience was a once in a lifetime opportunity. To every cast and crew member of Peter Pan, well done. You all took the audience’s breath away and made them remember what it was like to be a kid again, even if there was a hiccup or two along the way.