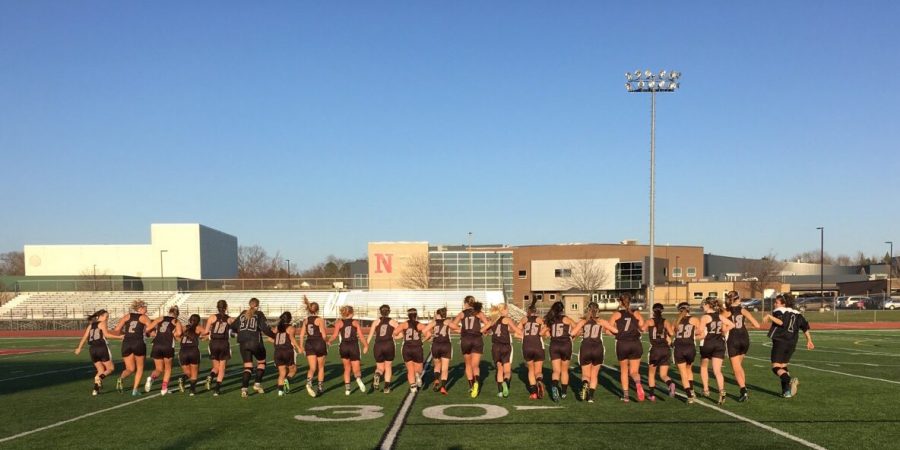 WO Sr. Drew Jansma sets her feet, angles her hips outward, and matches the pressure against her stick from the opposing center. The whistle sounds and Jansma cranks her stick up and out, throwing the ball to her left. Already anticipating the draw direction, Holland Christian Frosh. Elise Kunkel swoops in to snag the ball out of the air and races down the field. She passes to WO Soph. Scarlet Kellner who then calls an isolation play. She goes in for the shot, but the defense is on top of her. Instead of forcing through, she pulls out of the 12 meter arc. At that moment, HC Frosh. Zoey Frye cuts through and Kellner ditches the ball to Frye. Frye pivots and shoots over the goalie to score another point for West Ottawa’s Girls’ Varsity Lacrosse team. Multiple factors come together, including teamwork like this, to add up to the team’s incredible advancement this year.

The team’s record is a clear indicator of the substantial difference from season to season. In 2014, the girls’ ended with a weak record of 2-14, yet last year they ended the season at 10-9. Currently, the team’s record is already 10-4. These numbers show a distinct indication of the hard work the players have put in during and outside of the season. “A winning record is incredibly exciting not only for me personally, but for the program too. It shows that we have a lot of potential. . . In my freshman and sophomore year, we were a fairly new program, and we still are, but it’s amazing to see the progress that can be made in just a season,” Sr. Olivia Allen said.

Their record is proof that the program is growing and in good hands. With a new coaching staff in 2015, the team has grown exponentially. “The coaches are great – they are always pushing us to do our best and encouraging us,” HC Jr. Lindsey Raak said. The positive atmosphere gives the girls motivation to improve, and it clearly shows. Because of the coaches, “. . . we can see how far we can go with our stronger program against others like Grand Haven or Grand Rapids Christian,” Kellner said. This year, WO was evenly matched with both GH and GRC, only losing by three points in each game. In the past, WO struggled to keep up with them. Coaches count those games as wins unofficially because of the vast improvement and equivalent skill levels. Both the record and the GH and GRC games show how much the team has improved its game.

Two rival schools rarely get along in any sport; however, this year, the WO girls lacrosse team and the HC girls lacrosse team faced an unusual challenge: A merger of rivals. WO and HC needed to join and work as a team. “When I heard that HC was joining us, I was worried that we would work as two different schools. But when tryouts happened, we instantly all bonded as one team,” Soph. Katelyn Kuzmanko said. If the teams did not bond well, this season could have been a disaster. Luckily, the girls got along immediately. Despite the doubts in the beginning, the merger proved beneficial, adding more skill to the team. “I love the girls and just how well we have bonded. From day one, they have been teammates and friends on and off the field. They always make practice fun and interesting. They are uplifting and caring even outside of practice and games,” Raak said. With the strong bond that the girls have, it truly impacted the team in a positive way.

With over 60 seasons of experience collectively between the team, transferring skill and technique to younger players is important; it’s how WO has improved their technique so much. Experienced players pass on their tips and continue to learn even more with the newer players beside them. Each position requires different tweaks in strategy and WO has bettered its performance through continual updates. Players explain their approaches to main positions.

Center: “Watch the draw happen and find the ground ball as quick as possible. If I’m taking the draw, I use my body weight to place myself into the ball, which helps me throw the ball upwards or to the sides,” HC Frosh. Elise Kunkel said.
Middie: “You always have to keep your head on a swivel because you never know when or where you’ll be needed next. You play a dynamic role on the field; both sides count on you to be there for them. It’s important to always be working to improve your stick skills because a loss of the ball in the midfield or on transition is devastating especially during a harder game,” Sr. Kristen DeWys said.
Attack: “Always pick a spot on goal and put your body weight into the shot. Accuracy and power are key,” Kunkel said.
Defense: “I think the fundamentals are exceptionally important; however, the best strategy on defense is the mindset. Instead of changing what you do to adapt to the opponent, it’s important to dictate where they go. There has always been that misconception on defense, and it’s important to realize that to be a great defenseman,” Sr. Abbey Jongekryg said.
Wings: “Transitioning down the field takes a lot of running while defending or setting up passes depending on which way you’re transitioning. Staying in front of the girls can be very difficult as stops and starts are constantly happening,” Kunkel said.

With the season coming to a close within the month, the girls keeps their hopes up for their final regional game against GH on May 27th. After this season’s end though, the program will be graduating eight seniors. Nevertheless, this isn’t too big of a worry. “We have lots of different skill levels from each grade, so we hope the team continues to stay this good in the next few years,” Soph. Alex Dils said. With all that has gone into the program these past few years, WOGLAX plans to keep the momentum for the next year. 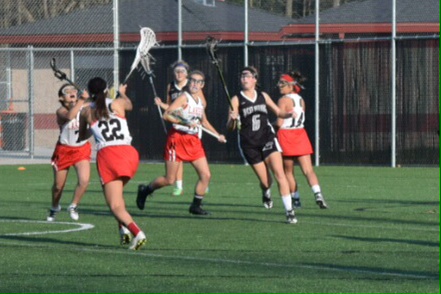 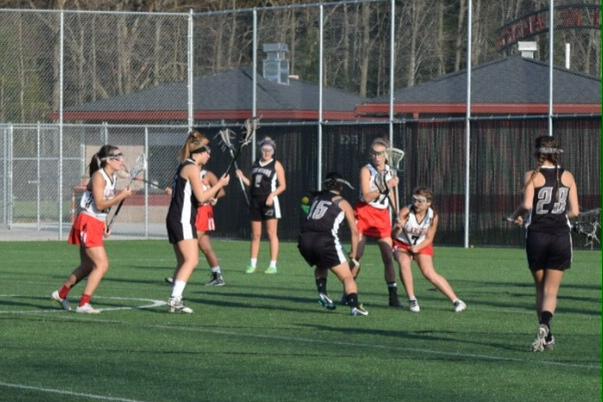