The untold story of the snow day 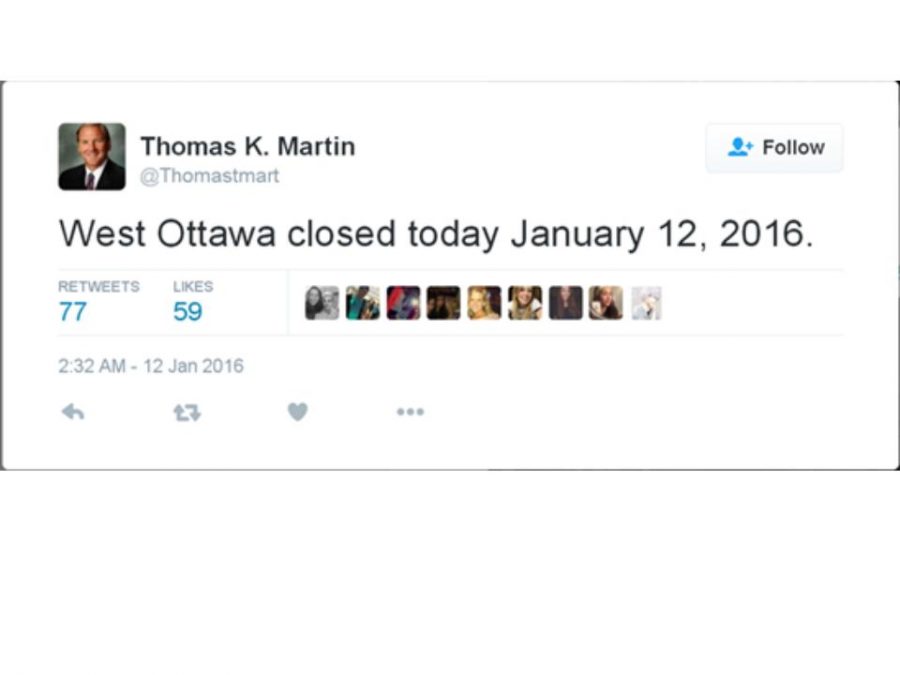 Superintendent Tom Martin grabbed his briefcase and buttoned up his coat as he headed out of his office for the day. As he headed toward the door, he couldn’t help but notice the ever quickening fall of snow outside his frosty window at the Administration Building. Then he saw it – the neon green weather advisory note on his secretary’s desk – it was going to be a long night. Martin headed home to “Pay attention to the weather, watch it at dinner time, and for sure watch it at 11,” his normal routine when there is extreme weather predicted. As Bill Steffen uttered the last words to wrap up the 11o’ clock news, Martin switched off the television, headed up to bed, and set his alarm clock for 4:30 am. “All night I’ve got one eye open and you hear everything, the wind blowing and the whole thing.” As he drifted asleep he wondered if, and when, he would get a text from Transportation Director Paul Wegmeyer.

A few blocks away, Wegmeyer jolted awake to the rhythmic buzzing of his alarm clock. It was 4:05 am, time to hit the road. As he buttoned up his shirt, he walked over to his front door and flipped the switch on his outside lights. His suspicion was confirmed. Heavy snow was indeed falling from the sky. It’s 4:10 am, and Wegmeyer hustles out the door.

As Wegmeyer left his driveway and tapped the accelerator he could feel the street was slippery like a skating rink with frozen packs of snow. This situation definitely warranted a possible threat to the district. He pulled off the road and slid into a parking space to make his first call of the morning. Wegmeyer’s first call is to the National Oceanic and Atmospheric Administration station in Grand Rapids to speak with a meteorologist on duty. He speaks with the meteorologist about factors such as wind speeds, dew points, moisture in the air, temperature forecasts, and visibility expectations. He then must make his next move to assess the situation in West Ottawa’s District. “West Ottawa is a very unique district because about half of our landmass is covered with canopy cover, which are trees, and that offers a lot of protection for the most part,” Wegmeyer said. He is now on his way to the lake to see what is going on there. Is it blowing? Is it drifting? Is there any fog?

It’s now 4:40 am and area transportation directors are starting to contact each other. At this time, Wegmeyer touches base with directors from Zeeland, Grand Haven, Hamilton, as well as Hudsonville. He shares his concerns for the day as well as takes the other directors concerns that might impact our district.

It’s 5:10 am and Wegmeyer has to decide on his recommendation to Superintendent Tom Martin, it is 50/50. He is ultimately going to leave the decision in Martin’s hands.

At 5:15 am, Wegmeyer taps send to shoot his brief over to Martin. Wegmeyer’s text message says that it is very windy with blowing snow that is accumulating. He thinks that visibility is relatively good, though. He also added what he anticipates the surrounding transportation directors are recommending to their superintendents.

Martin has been up for almost 45 minutes, he is watching the morning weather and is midway through his second cup of coffee. Suddenly, the sharp ring of his phone startles him; this is the text he has been waiting for. The brief from director Wegmeyer shows adverse conditions. Martin immediately starts pounding away on his phone in a “text stream with the other superintendents … so it’d be Holland and Zeeland, Hamilton and Saugatuck,” said Martin. He learns that Zeeland is going to close as well as Hamilton. It is a hard decision. Martin has been “thinking about it all night”. He decides to close because it is very late in the winter and there has only been one other snow day.

At 5:45 am the decision is sent through the automated system which will contact the district and notify news media. There will be no school – it’s a snow day.

Across the district parents quietly turn off children’s alarm clocks and students exhale a yawn of relief for the day off they were hoping for. However for Wegmeyer and Martin, it will be a full day. They are relieved of their snow day stress for now but they realize they will have many more difficult snow day decisions to make in the future. Wegmeyer says, “The thing that’s a real strength for our communities around here is that there is a real good working relationship within the transportation departments. We have a good trusting relationship and try and help each other through that and it seems as though superintendents have that same mutual respect for each other and, in the end, we all work together for the safety of the kids.”