The West Ottawan • May 4, 2022 • https://thewestottawan.com/10896/sports/the-bonnemas-wo-class-of-2022-triplets-all-participating-in-collegiate-athletics/

The Bonnemas: WO class of 2022 triplets all participating in collegiate athletics 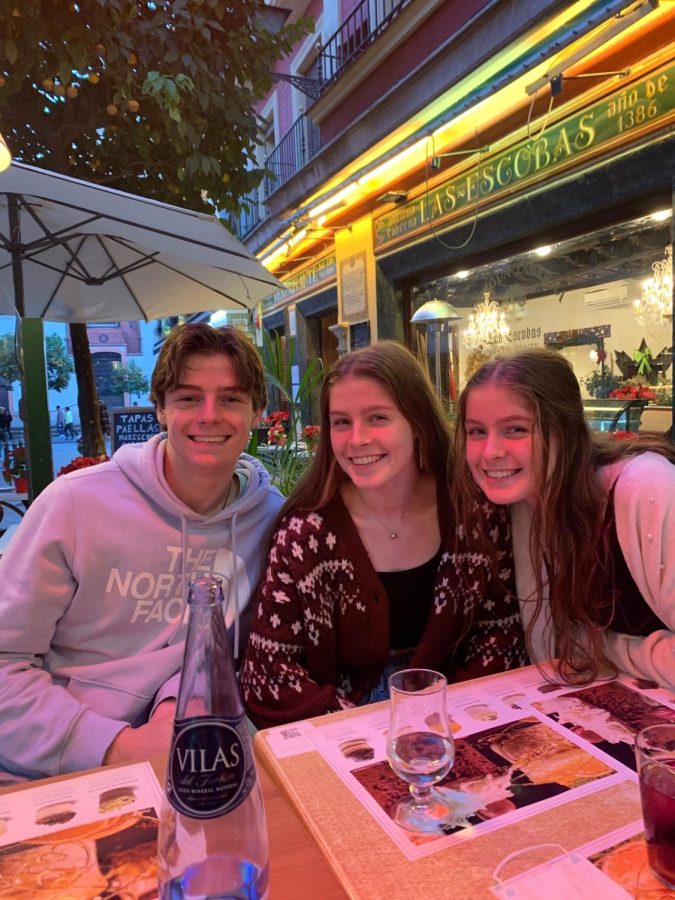 One in 10,000. The odds of having triplets. One in 2,197. The odds of three random high school athletes all going on to play collegiate athletics. After combining those statistics, there is a one in 21,970,000 chance that triplets all play sports in college. They’re not just one in a million. The Bonnema’s are one in 21.9 million.

“I’ve been running since elementary school when my mom forced me to do Girls on the Run,” Sophie said. “As a 4th grader, my views of the sport were a lot different than they are now, but over the years I realized that it’s something I am really passionate about.”

Her passion for running has undoubtedly grown over the years. “Running in college is something that I never would have expected as a freshman or sophomore, and honestly running for MSU is something that junior Sophie would even be surprised about,” Sophie said.

However, Sophie fell in love with Michigan State during the tour of the campus and running facilities. “I had a really good first impression of the coaches at MSU, so for a while going there was always an idea on the back of my mind,” Sophie said. “ When I visited campus and got to meet some of the team … I almost immediately knew that that was where I wanted to be next year. MSU ticked all the boxes for me, which is something I hadn’t had at the other colleges I looked at,” Sophie said.

Looking back on her time running for WO track and cross country, Sophie greatly enjoyed all the running. “I am really proud of how I have transformed as an athlete over the past four years, and there’s no way I could’ve done it without the coaching, training, and teammates that I was lucky enough to get,” Sophie said. Also, Sophie credits her coaches for pushing her to be the best runner she could be. “I really owe it all to Coach Kyle and Coach Barnes,” Sophie said. “Not only did they make me faster, but they made me more excited about running and want to be the best I can be.”

Sophie is very excited to continue her running and academic career at Michigan State, where she will compete against her sister in certain meets.

Commonly found running right beside Sophie is her sister Abby, who is going to continue her academic and athletic career at the University of Michigan, where she will run cross country and track as well. “I’ve been running since 3rd grade if you count Girls on the Run in elementary school, but I switched to running year-round in 7th grade,” Abby said.

After switching to running full time, the rest was history for Abby. She set the record for the fastest senior 5K time in WO history, as well as the third-fastest 5K PR overall (for all grades) in WO history.

Abby credits her coaches for getting her to stick with running. “They took everything really seriously and it was intimidating at first but then I started getting faster and it was really fun,” Abby said. “The atmosphere during and after hard workouts is one of my favorites because everyone is encouraging each other and giving out high-fives.”

The high weekly mileage and rigorous training schedule of WO Track and Cross Country have prepared Abby for running at the University of Michigan, a campus that she loved with a welcoming team that she met and ran with during her visit.

“I’ve also learned over the years how to push myself in races and workouts, and I feel like that will be beneficial towards working hard both athletically and academically in college,” Abby said. While running at Michigan, Abby plans to go into a Pharmaceutical Sciences program offered at the university, where her determined personality will support her.

Finally, Noah is going to continue his athletic and academic career at Hope College, where he will play on the baseball team. Anybody who knows Noah knows that he lives and breathes everything baseball. Playing for 13 years and counting, Noah has undoubtedly grown as a ballplayer.

“When I was 11, I was a very mediocre baseball player and I did not enjoy playing poorly,” Noah said. “That inspired me to work harder to earn more playing time.” Now, he is West Ottawa’s ace pitcher and is the starting shortstop off the mound.

Noah has made several accomplishments playing for WO baseball, such as OK Red All-Conference, District 6+7 All-Area, and the Most Valuable Player Award. Noah had a 37-hit season last year while pitching 50.1 innings with an ERA of 2.57.

Playing for travel organizations such as the Lakeshore Warriors and the West Michigan Flames allowed Noah to hone his skills as a baseball player, ultimately leading him to commit to Hope. “Through high school baseball and travel baseball, I was given the opportunities to practice my skills in a competitive environment that allowed me to grow as an athlete,” Noah said.

Ultimately, the trio is a great representation of West Ottawa’s athletic excellence. The hard work and dedication that each of them put forth on the field has paid off and led them to collegiate-level athletics where they will continue to work hard and earn a degree.