“I just want you to be happy” 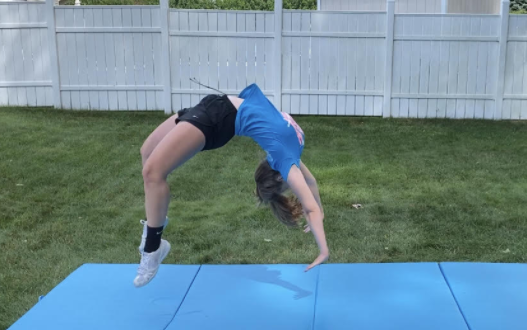 Cheerleading was my passion, until it wasn't.

In one second, I feel a dizzy head and a back on the verge of being strained again from the twelfth back handspring of the day, sore legs from sky-high jumps, overworked muscles from heavy stunts, a nearly lost voice from ear-piercing yelling, and blue popped blood vessels from claps that sting my palms. The next second, everything is gone.

A piece of me is gone.

“I don’t think I can put myself through this anymore,” I said through trembling lips and eyes full of tears.

“If cheer is not something that makes you happy anymore, it’s not healthy to continue to do it,” my dad repeated for the fourth time that week.

I listened, but I hadn’t yet learned.

“You are an amazing cheerleader. I will miss watching you if you decide to quit, but I just want you to be happy,” my mom said soon after my dad. The sad part is that this conversation was far too familiar to my ears.

I have been cheering for 7 years now. Daily 2 ½ hour practices, football games, rocket cheer games, and early morning competitions that lasted half the day and half my mental state became things that felt like second nature to me. But, just because something feels like second nature doesn’t mean it’s good second nature.

This second nature started to feel like vacuuming one’s house. No one wants to vacuum, but they vacuum anyway because they have to. It’s a chore.

The words spoken by my mom, “I just want you to be happy,” played on repeat in my head. When I was at practice, these words blared in my head like a siren signaling an emergency.

After months of listening to my mom’s statement and months of endless conversations about my happiness during the cheer season, the sirens blared louder than ever.

I was not happy at all, and I was not having fun cheering. I finally accepted the words. “I’m not going to do competitive cheer for the 2021-2022 season.”

This concluding realization of my mental state was one that I avoided accepting for far too long; it was a realization that came when my 2021 sideline season still had weeks to go.

It was painful getting through the last few weeks, I constantly felt like I was living out the statement, “Fake it till you make it.”

One day, I walked into the south building of West Ottawa High School to go to a swim meet. As I was walking to the pool doors, I saw the JV Competitive Cheer Team practicing in the cafeteria. I knew they were having practice at the time I was walking in, but I didn’t know how much I would be saddened when I walked past them.

As I saw stunts in the air, my heart sank. I felt my face blush with the heat of sorrow. I felt my eyes well up with tears with the feeling of anguish.

“I’m supposed to be there,” I told myself.

This sudden state of sadness made me pause for a minute.

“Take a deep breath,” I told myself.

I made this decision for a good reason. I wasn’t feeling enjoyment, and I chose to take care of myself instead.

I listen to my feelings day by day as the winter competitive cheer season passes through. Some days I feel guilt, talk to my family and friends about it, and push through. Other days, I feel crazy relief.

One day after school had ended and I was at home, I found myself downstairs sharing funny stories from the day with my mom while we also talked about our plans for the night. “Let’s go for a night drive and listen to my favorite playlist,” I tell my mom. My mom happily agreed with joy.

At this moment, I kept thinking to myself, “Usually at this time, I would be stressing out about my upcoming practice in 45 minutes.” Having anxiety and dread after school about going to practice were the only emotions I had known since 7th grade; those strong emotions were finally lifted off of my shoulders. Now after school, I am at peace.

This constant time for myself presented to me the question, “Will I ever go back?”

It is difficult answering this because cheer was not my only responsibility. I am involved with WOSWE, NHS, LINKs, and crew for the play. I am also a part of the yearbook staff which is a big responsibility during and after school.

Next year, I’m planning on trying out for Vocalaires which is another huge responsibility to add to the list. Adding cheer back to this anxiety-inducing list will make it become a dreadful chore once again.

Looking back at all of the years I’ve cheered, I hardly regret a thing. The only thing I regret is what I let happen to myself at the end; disregarding my happiness for a fake, unhappy version of myself is something I have learned to never let happen again.