The jock, the optimist, and the social butterfly

I approached lane four as a wave of girls exited the pool. When I reached the block, I pulled my goggles over my eyes and stared down at the water, blocking out the noise. I could feel my team and my coaches’ eyes staring at me, but I ignored them and waited for the announcer.

“Swimmers step up,” the announcer said into the microphone. I carefully stepped onto the block. Beep! I launched into the water in a tight streamline. I kicked hard, cutting through the surface of the water with my hands. 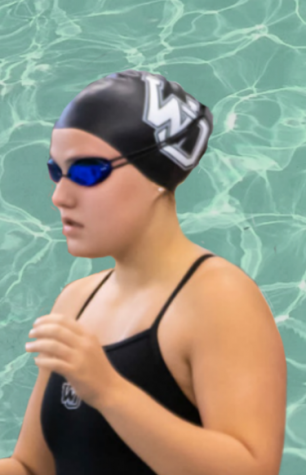 I pulled my arms through the water at a controlled yet fast pace as I maintained a steady kick. As the wall approached, I limited my breathing to prepare for the turn. I flipped and pushed off the wall as hard as I could.

With every flip turn, I felt my lead growing, but I kept my pace strong. With only 25m left, I pulled my arms through the water faster and kicked harder. I hit the wall hard with my hand and a wave of water rushed over my back.

I hesitated, afraid to see my time. Practice was hard this week and I knew the intense training leading up to the meet would affect my time.

Finally, I looked up at the scoreboard and saw my name, O’Mealey O next to a number one. My eyes shifted to the right, and I saw my time. Five seconds slower than my best.

I took a deep breath and told myself to not get upset. Coach Steve’s voice echoed in my head, “Trust the process.”

After a second, I pulled myself out of the water and walked over to my coaches. As soon as I reached the team, I was bombarded with high fives. My friends approached me and comforted me about my time.

I love my team’s support, but being in the spotlight can be exhausting. Year after year, I feel a constant pressure to be faster. The team depends on me dropping time, placing higher at conference, and getting my state cuts.

To most, my achievements look effortless. The rest of the team doesn’t realize all the hard work that goes into my training. During the season, in addition to normal practices, I lift outside of practice a couple times a week. In the off season, I swim with Michigan Lakeshore Aquatics (MLA).

I never really get a break. I am always working to get faster for myself and for my team. While the pressure can get overwhelming, I love being able to represent my team, especially in the relays.

Last year, I was in the 400m relay at conference. We had been neck and neck with Rockford and Grand Haven all meet and we needed to win the relay to win the conference title.

The pool was electric, every team was cheering for their relay to win. I could feel the pressure building on my shoulders. When I dove into the water for my leg, I swam as fast as I could.

When our relay finished first, my team went crazy. I am so grateful I helped my team earn the conference title.

While I feel constant pressure to be the best, leading the team and being a part of key moments such as the relay makes all the pressure worth it.

I shoved my way through the crowd of swimmers until I emerged on the far side of the pool deck, lane eight. I stood behind the familiar block and glanced at the scoreboard. Rockafellow M in shining bright letters lined up with the number eight. I looked down the pool at the girl standing by lane one. I had to beat her if I wanted to avoid last place.

“Swimmers step up,” the announcer said into the microphone. I stepped up and placed my toe over the edge, gripping the lip of the diving block. Beep! I exploded off of the block and into the water. Once I reached the other wall, I flipped and looked over to the other lanes. I could make out eight shadows moving through the water. They were all ahead of me except for lane one. 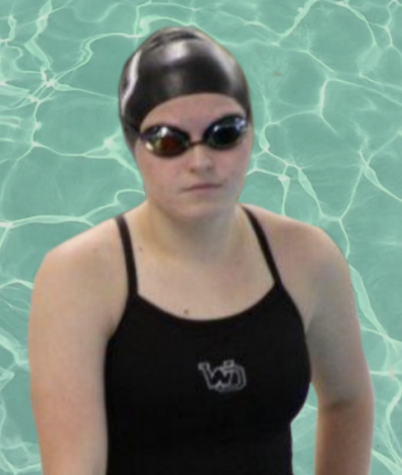 Exhausted, I looked at the scoreboard. A bright red seven sat next to my name and time.  I smiled. Definitely not first, but definitely not last.

I am used to almost last place. I normally swim in the varsity heats, but I am almost always placed on the outside lanes. I am not seeded to win and I am not the center of attention during the race. My races score points, but not enough to make a huge impact.

For example, recently we had an important meet against Grand Haven. As soon as I dove into the water, I could tell I was exhausted. After the first 100m, my legs were numb and my lungs were on fire. I finished last and added four seconds.

As I approached the team, they greeted me the same way they always greet me: high-fives and smiles. They were unconcerned that I added time and lost the event.

The anonymity is nice. I don’t experience the immense pressure that other swimmers do, but I still swim varsity races. I may not be the best, but I swim with the best.

Despite swimming in varsity races, I never quite feel like I belong. Six places separate me from the best, but six places are more like six miles.

During my 500m races, first place almost always laps me. By the time I finish, most of the top girls have been waiting for well over twenty seconds. They have caught their breath, while I am still gasping for air.

While I never feel like I belong in varsity races, I wouldn’t want to be anything other than an almost last swimmer.

I walked over to lane six and shuffled my way through the long line of girls standing behind the block. “What heat are you in?” I asked each girl until I found my place in line. Once I settled into line, I looked up at the scoreboard. Heat one was spelled out in bright red letters on the top right corner of the board.

I looked around for my friends and noticed that one of them was in line a few lanes down. I waved her over, and we talked as the races continued. Eventually, our heat approached and my friend walked back to her lane. I looked up at the scoreboard once more and saw my name, Hogan M, next to a red six. 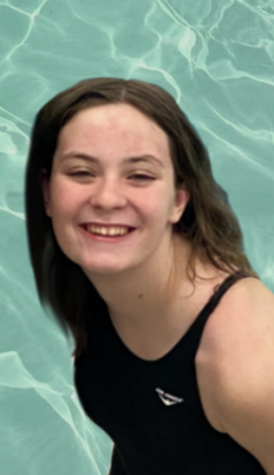 “Swimmers step up,” the announcer said into the microphone. I pulled my goggles over my eyes and stepped onto the block. Beep! I dove into the water and surfaced a few seconds later.

After catching my breath, I looked around the pool deck. Most of the team was distracted, either on their phones or talking to each other. I sighed and pulled myself out of the pool.

Because I swim in exhibition heats, I don’t get the attention that the varsity swimmers do. While I swim, only my friends and family cheer me on. Everyone else is distracted or preparing for their own race. However, during varsity races, the coaches and the entire team focus on the race.

This lack of attention can be frustrating because I don’t get the help I need to improve. At conference, my parents noticed my dives are not as good as they could be. Instead of launching myself forward, I dive deep and lose the momentum of the start.

Prior to conference, no one had mentioned that I needed to work on my starts. If I had received a little more individual attention from coaches, I could have improved my starts and dropped more time.

While I don’t receive the same amount of attention as the varsity swimmers, I also don’t experience the pressure that they do. The lack of pressure from my team allows me to relax and have fun while I swim.

During meets, I don’t stress about my races. Instead, I talk and joke around with friends. I swim because of my friends, not because I want to be the best.

While I am not the center of attention on the team, I am glad I don’t experience the pressure that varsity swimmers do.