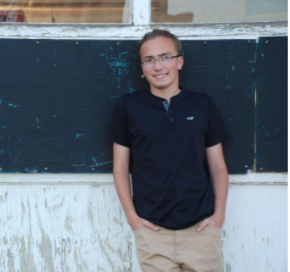 As Damian Turowski sits in class, he looks around the classroom with only twelve kids. The classroom feels desolate, and everything is nearly silent. He can only hear the pages of his teacher’s book turning every few seconds. Turowski is stuck going through the same cycle every day. He wakes up, goes to school, and questions his place in school.

Growing up, Turowski’s parents believed St. Brigid Catholic School in Midland, Michigan, was the best option for him and his siblings. Being the oldest kid, he didn’t get any say in the decision, so with good intentions, his parents sent him to St. Brigid.

Throughout elementary school, the social environment was great. What do elementary students know about drama anyways? Everyone got along with each other, and most didn’t understand the concept of drama and toxicity yet. During recess, everyone played games together. Anyone in the building could hear the laughter coming from the playground.

5th grade approached, and most of Turowski’s friends were planning on switching to a local public middle school. Internally, he knew he wanted to go with them, but his parents decided to make him stay since they already paid for the expensive tuition.

For the first time, Turowski felt like an opportunity was being taken away.

As he continued to complete middle school with most of the same kids, he realized he didn’t fit in with others in his grade. There were more than 12 kids now, but everyone else was already in small groups. Making new friends was nearly impossible, so Turowski began to question himself and how he fit in at school.

Similar to most middle school experiences, the drama and toxicity of students began to control Turowski’s life. Everything was about money, friend groups, and social status. Turowski felt surrounded by self-centered students. “Those just weren’t my type of people. I tended to be the odd one out,” he said.

As 6th grade began, Turowski began to feel less connected with his best friend, Ben. New kids from other private elementary schools were coming in, and Ben’s attention was going straight to them. “As soon as they showed up he started hanging out with them more, both in and outside of school. I started feeling a little more left out day by day as I’d sit there during lunch around a bunch of people I really didn’t feel like talking to while someone who used to be my best friend was sitting on the opposite side of the table laughing with a bunch of snobby rich kids,” he said.

Communication between them became very minimal. They would still hang out outside of school, but Turowski felt like he was at the bottom of Ben’s priorities. As time went on, eventually their friendship was over and Turowski felt defeated. “One time he had this movie night where he invited the whole class except me and I felt really betrayed like I was the first person he would usually invite to anything and he didn’t even mention it to me. After that our friendship was pretty much over; he would even make fun of me sometimes with his new friends,” Turowski said.

Waking up to go to school every day became more difficult. Turowski felt like he was trapped, but he was stuck for the next three years. Middle school is supposed to be the time when a person can find themselves, but for Turowski, he wasn’t able to.

Although he couldn’t find a way to express himself at school, he was still able to break away from his parent’s beliefs and develop his own. He slowly began to realize he didn’t agree with what he was forced to learn at school. “I wasn’t really into all of the religious stuff they were teaching there,” Turowski said. For the time being, he didn’t have an option.

As 8th grade arrived, Turowski felt a sense of freedom. “It was finally nice to be in 8th grade and able to make those big decisions,” Turowski said. He had to either continue with private school or move to a public school. His parents wanted him to stay with the private school path, but continuing would be nearly impossible. The commute to the nearest private high school wasn’t worth the long drive.

Overall the people would’ve been more mature, but Turowski still feels like he wouldn’t be able to express himself at a private school. Friend groups wouldn’t have been so stuck together, but students would still have the mentality Turowski didn’t agree with.

Entering Herbert Henry Dow High School for the first time was life-changing. Not only did Turowski have to learn to fit in as a freshman, but he also had to learn how to adapt to a public school. “It was finally okay to be yourself more I guess,” he said. Looking around, he noticed the massive amount of kids walking; this was way more than he’d ever been with before. The difference between the two schools was dramatic.

For the first time since elementary school, he felt like he had a group of friends again. “I found quite a few people I could be friends with and hang out with,” Turowski said. These people Turowski felt like he could actually relate to. They were similar to him, which was an odd sight for him at first.

He became more comfortable with acting like himself when near others. There weren’t strict rules or restrictions he had to follow. “I didn’t feel as much social pressure,” Turowski said. His friends made him feel like he could be himself. They did everything together, and Turowski felt like he was wanted for once. “Once I got more comfortable with being myself, it definitely let me develop more as a person. I had more friends and stuff to do. It made my life a lot better,” he said.

As the school year progressed, Turowski found joy in participating in sports. Prior to the switch, the sports at his school were very limited. He found success in track, bowling, and tennis. At St. Brigid, he either had to travel to different schools or team up with complete strangers to participate in extracurriculars. “It was nice to have organized sports for once,” Turowski said.

He also got to experience the family feeling for the first time. “The whole school kinda got behind you and it felt like a family.”  Turowski remembers his freshman year when he was in PE class, they were doing sprints, and he was getting pretty good times. A guy in his class named Alex walked up to him. “At the end of class, he started telling me I was really good and should join the track team for the spring. That’s where I met a group of friends and teammates I’d have until graduation and some of which I still keep in touch with,” Turowski said. No matter what the school event was, Turowski’s classmates were always there to support him. Friday night football games were an eye-opener: the marching band, cheerleaders, filled seats, and most importantly the student section. Everything was diverse even if everyone didn’t get along, the student section always came together.

The main difference was the dress code. For the past nine years of his life, he was not required to wear the same uniform every single day. Between the plain uniform and strict rules, Turowski felt like he was forced to be someone else. The dress code at his new school allowed him to express his personality through clothes.  “More freedom to express yourself, you know? There was no dress code here. Once you got to wear what you wanted to, it was easier to feel comfortable,” he said.

Finally finding some peace with himself, Turowski started excelling in other areas like grades, his social life, and his overall happiness. “I also started to do better during school,” he said.

Even though Turowski felt he wasn’t completely surrounded by self-centered kids anymore, he wasn’t completely able to avoid them. “But there were always those kids. They kinda stuck to themselves. Everyone had their circles of friends. Even the richer kids were more open to friend groups,” he said.

He knew he wasn’t going to allow one small group of kids to ruin his high school experience. On the bright side, he was introduced to many people from different backgrounds.“Luckily enough I got to go to a more diverse place,” Turowski said.

Even though changing schools doesn’t seem important, Turowski’s life completely changed. Looking back on his private school experience, he continues to compare the quality of the teachers.

“The general attitude of the teachers was different. The teachers at the private school had more favorites, and they could get away with a lot more,” Turowski said.  Turowski recalls one time during 7th grade when he had a teacher that seemed to always turn away when it came to bullying. “It was anything from mocking stuff we say to making fun of our appearance, or just like knocking stuff over in the classroom and then blaming me for it,” he said. Replacing teachers in a private school was much more difficult compared to a public school.

Teachers are some students’ only trusted adults. For Turowski, he felt like he couldn’t speak with his teachers.  “I felt like they weren’t held to as high of a standard,” Turowski said. During a time when he needed the most guidance, Turowski was unable to receive leadership.

Although this time of his life limited his creativity, he is grateful. Turowski was able to handle the obstacles thrown his way and find a way to persevere.  Now, Turowski is currently attending Grand Valley State University. He wants other young kids going through a similar situation to know they are not alone. Eventually, they will find a way to express themselves even if they don’t find their spark right away.