Ben and Brady vs. WO: Lacrosse 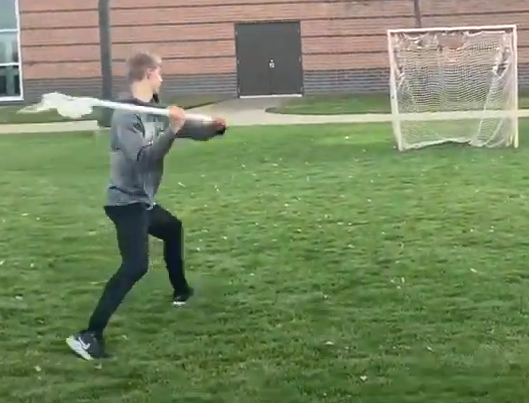 I wound up my stick, hoping I had enough power and accuracy to hit the top corner, a shot most goalies would be hard-pressed to save. Everything Jr. Trent Mulder had coached me about shooting being taken into account on this attempt. As the follow through progressed, the rubber ball seemed to have a mind of its own.

Instead of flying like a missile into the upper right netting, it plopped out of the pocket of my stick, falling harmlessly to the ground.

In this second edition of Ben and Brady vs. WO, we took our skills to the lacrosse field. We decided to challenge Jr. Trent Mulder, who was a varsity starter as a sophomore. We would test our skills against Mulder in three separate competitions; passing, catching, and shooting.

Going into this competition, we didn’t know what to expect. We both had never played lacrosse before. But we had both played baseball for years, and we can catch a ball flying at high speeds easily. We expected catching a lacrosse ball to be similar. The only problem we envisioned was passing or shooting with the long stick, both foreign concepts to say the least.

The first competition was catching, which is arguably the most important skill in lacrosse. We would test our skills in this drill by attempting to catch a ball that was thrown against a wall and rebounded back to us.

Riley went first. The first ball came flying back at him. He was able to get his stick to the ball, but wasn’t able to catch it. The next two balls were very similar, with them glancing off of the end of Riley’s stick. The fourth ball finally landed in the back of the basket, and Riley had his first catch. Out of the next six balls, Riley caught three.

After our unsuccessful attempts at catching, we asked Mulder for tips.

“I know it sounds dumb, but follow the ball. Really focus on where the ball is going,” Mulder said. “Also, cradle the ball as you catch it, so it doesn’t just fall back out of your stick.”

Mulder showed us how to do it by doing the drill. He caught nine of the ten balls.

With these new tips in mind, we decided we would try to see how many balls we could catch now. Once again, Riley went first. He was much more successful this time as he caught seven out of the ten balls. Bosma was also much more successful, matching Riley’s total. Mulder’s coaching must have helped himself as well, and this time he caught all ten.

Despite the vast improvement, it is doubtful that if we threw on gear and were put in a pressured game situation we would have any success at all.

With catching completed, we could move on to the passing drill. To test passing, we moved back every time two passes were completed consecutively. This time, Bosma started.

We began about ten feet away from each other. The first three spots proved to be easy for Bosma, as he had no bad passes yet. At about 20 feet away, Bosma started to struggle. The first pass landed about three feet short of Mulder. His second pass was a little better, and Mulder was able to catch it. Bosma’s third pass went flying over Mulder’s head and landed about 15 feet behind him. Bosma’s fourth and fifth passes were good enough for Mulder to catch , so he continued to move back. Bosma was able to make it all the way to thirty-five feet before two bad passes in a row.

As Mulder took his turn, he gave us some pointers. “You want your hands close. Your hands are too far apart, which is why you’re struggling to pass longer distances. Shorten the distance between your hands, and the stick will act as more of a catapult, allowing you to pass a lot further,” said Mulder, as he whipped in a flawless pass from around 50 feet away.

With this information in mind, the stick really felt like a catapult, and the added power greatly increased the distance of our passes. However, with more power, came less accuracy. Our passes flew anywhere but in Mulder’s stick. They simply were not on target.

If we were to try out for lacrosse this spring, more passing practice would definitely be in order.

The last competition we did was shooting. The main event. We had not performed up to our expectations at this point, and we were determined to do better. We would shoot 10 shots each, from about 25 feet away.

Riley decided to go first. He wound up his stick and shot. Way over the net. Getting the ball back, he shot for the second time. This time, a laser off to the right. Riley continued to struggle, and only made four of his ten shots. Next, Bosma.

He wound up and shot. Way short. Bosma shot it right into the ground about ten feet in front of him. He retrieved his ball, embarrassed, and went again. Wound up and shot, and to his surprise, hit the back of the net. Confident now, Bosma wound up for his third shot. The ball went flying towards the goal and donged off the top bar. Off to a pretty good start, Bosma cooled down and only finished making four out of ten shots.

Now, Mulder’s turn. “You want to keep your arms away from your body, and use your hips,” Mulder said as he fired a shot that landed perfectly in the top right corner. We were shocked. He shot the ball over double the speed of ours, with pinpoint accuracy. We were both thinking the same thing.

“How fast do you shoot?” we asked.

“About 85 miles per hour,” said Mulder nonchalantly. He continued shooting with insane velocity and precision, and made nine out ten with ease.

Now, it was redemption time. Using the tips Mulder gave us, we instantly noticed a difference. Riley wound up and fired a shot with much more speed this time. This ball soared just to the right of the net.

“Wow, that already feels so much better,” Riley said. Second shot was even better, with more speed and hitting the back of the net. Riley continued shooting with increasing speed and made six out of ten shots.

After Riley’s display of increasing skill, Bosma was ready to go. Making sure to use Mulder’s tips, Bosma wound up and shot. The ball flew and landed in the goal. Bosma agreed. “This is so much better than before.” Bosma’s speed increased, along with precision, and he ended making six out of his ten shots.

Although we felt good about how we shot, we were reminded that in an actual game you must weave around defenders and shoot at difficult angles with a goalie, all while wearing pads. That quickly brought our egos down.

All in all, we decided that we would struggle if we decided to play lacrosse. Nevertheless, our struggles would be shared. It was often the case when we would successfully complete the exact same number of each skill.

Our catching was very weak, and we were standing still. If we were sprinting trying to catch a lacrosse ball, well, we wouldn’t catch it.

Our passing was horrendous, and once again, we were standing still passing to a non-moving target. Although we shot pretty well, there were no defenders and no goalie.

After all our competitions were complete, we chalked up lacrosse as an L.

We came to the conclusion that lacrosse takes a lot of hand-eye coordination, and even more practice.

Stay tuned for the next edition of Ben and Brady Vs. WO.

You can check out the action here: https://mail.google.com/mail/u/0/#inbox/FMfcgxwKkbkTkwtSJZfmwNhPWDnCKQSJ?projector=1