A Project for Better Journalism chapter
The West Ottawan
News, WO Alumni 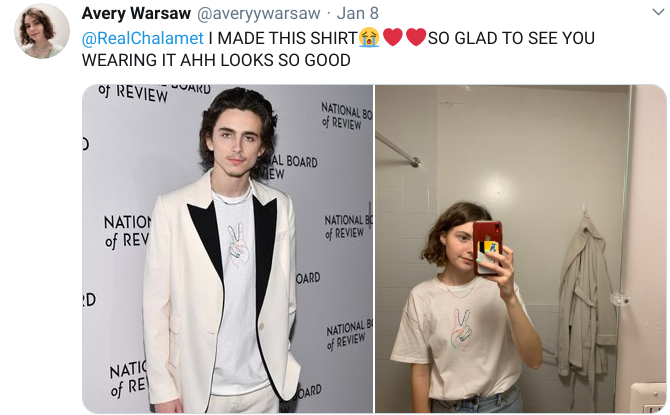 WO alumna Avery Warsaw has always admired how kind actor Timothee Chalamet is to his fans, and her recent experience only increased her admiration.

Warsaw likes to experiment with fashion. She learned to embroider in August 2018 because she wanted to “design my own clothes that were unique to me and that you couldn’t get in a store.”

The first design she learned was a hand holding up a peace sign. Chalamet commonly says “peace and love,” so Warsaw made him a shirt over Thanksgiving Break in 2019.

Warsaw also wanted to make the shirt because she admires Chalamet’s fashion choices. “He is very influential in the fashion world, and his style inspired me a lot. I thought it would be so cool for him to own/wear something that I designed and made him.”

Chalamet held an Eiffel Tower keychain from a fan at the Little Women premiere in Paris, so Warsaw knew her dream was possible.

In December 2019, Warsaw went to a screening and then a Q&A with the cast of Little Women. She slipped the shirt to Chalamet’s manager as he was leaving.

Chalamet then wore the homemade shirt underneath a $1600 white Stella McCartney jacket to the National Board of Review Gala on January 8.

Warsaw saw a picture of Chalamet while scrolling through Instagram. “I stopped and looked at it and was like ‘that looks familiar,’ and then it clicked, and I freaked out. Me, my mom, and my sister were so excited, screaming about it and jumping around.”

Chalamet claims that he doesn’t have a stylist, so he picks everything he wears. “It was so surreal because I never expected he would wear it on the red carpet to such an important event,” Warsaw said.

Warsaw tweeted about the shirt, causing many people to want one for themselves. Warsaw already sold the shirts through Twitter and Instagram. “It kind of forced me to make a business out of my embroidery. Without this happening, I don’t think I would’ve thought to make a portfolio or start selling my work online.”

Warsaw will start selling other designs made by hand this summer.

Warsaw is studying film at Sarah Lawrence College, but is interested in all areas of art. “It’s been a surreal and crazy experience that has definitely opened me up to new people and opportunities and encouraged me to take my art more seriously.”