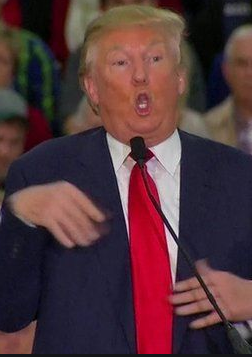 They laughed. That might have been the worst part about the already awful moment. They actually laughed.

In November of 2015, President Donald Trump had a rally and started talking about an interaction he had with a disabled reporter. While giving context to the audience, Trump took a bad turn. He began rudely imitating the disabled man. He changed the tone of his voice. He began moving his arms in a herky-jerky motion while holding his wrists limply, as if he was the disabled reporter. And the audience laughed.

The video of this moment shows eight people behind Trump heartily laughing. Roaring laughter can be heard from all over the stadium. Is that what America really thinks about people with disabilities? Is it something to joke about? Something to laugh at? It is utterly heartbreaking to see that this is how a crowd of people reacts to a public figure actively offending someone with a disability.

Crowds continued laughing in August of 2019. Security was escorting protesters out of the Southern New Hampshire University Arena. As they were on the way out, Trump started cracking more insulting jokes. He spotted a man leaving and said “That guy’s got a serious weight problem. Go home. Start exercising.”

Sixteen people can be seen behind Trump. All of them laughing.

If that’s not bad enough, they laughed again, but this time was worse. The Kellogg Arena was filled to the brim. People were overflowing at Trump’s rally in Battle Creek on December 18, 2019. This rally was different. About 600 miles away, the House of Representatives was debating Trump’s impeachment. People hung on each word Trump said that night. They, too, knew it was different.

Trump began discussing the recent death of Representative John Dingell. He was telling the crowd about how well he treated John’s wife, Debbie Dingell. He told the crowd about a phone call he had with Debbie. “‘He’s looking down, he’d be so thrilled. Thank you so much sir,’” Trump said, paraphrasing Debbie. “I said, ‘Don’t worry about it.’ Maybe he’s looking up — I don’t know.”

The audience applauded, and I heard my heart crack inside my chest.

President Trump made a joke about someone he knew going to hell. And the audience loved it. I don’t have the words to explain the kind of disappointment that I feel in that. I could try to write out my words, but they would never be enough. Imagine if he spoke that way about someone you love. You wouldn’t allow it. Why should we encourage that disrespect just because we don’t know the person who died?

I don’t want to identify with a country that appreciates offensive jokes coming from the most important public figure in the nation. Do you?