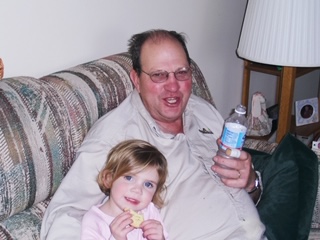 “And now these three remain: faith, hope and love. But the greatest of these is love” (1 Corinthians 13:13).  The truth is, love is unavoidable. Love is painful. Love is heartbreaking. Especially when it comes to losing a family member.

It was a typical Tuesday afternoon.  I was in the middle of an intense game of Hungry Hungry Hippos with my neighbor.  Amid all the childish screams of excitement, the ringing of the phone broke through.  My friend and I looked at each other, our eyes glimmering with mischief. We sprinted to the phone shushing each other and slowly picked it up and pressed it to our cold ears.

We listened as our mothers talked, trying our hardest not to giggle so they wouldn’t know we were listening.  My mom said that I needed to come home and do some chores. I could sense there was something off in her voice.  I started on my way home with an awful feeling in my stomach.

As I walked through the door, a sudden surge of sorrow immediately hit me.  I could tell my mom hadn’t called me home for chores. Something had happened, and it wasn’t good.

I sat on the couch where my entire family was waiting for me, their eyes dark red and swollen.  It felt as if there was a weight dragging the room farther and farther down spiraling into the abyss and there was no way of stopping it.  My mom reached over, grabbed my hand, and looked at me as if she had something to say, but her dry lips stayed pursed.

My dad finally mustered enough strength to pry his mouth open and speak.  I listened as he told me the news, his cheeks glistening in the light. Almost immediately, tears came streaming down my face as I processed what had just happened.  He’s gone. Forever. My grandpa, my built-in best friend, is gone.

I only got to see him twice a year, but despite the cliche, our relationship was truly like no other.  We told stories, we joked, and we laughed until we had no air left. He truly was my best friend and not being able to see him often made those memories with him even more special.

I remember the drive from Holland, MI to Albert Lea, MN for the funeral.  I had experienced this drive twice a year, every year, for my entire life.  But this one, it was different. It was quiet. It was sad.

Losing a grandparent is common in a teenager’s life.  As a teenager, grandparents are around 75 to 80 years old.  This is the general time period in which they could get injured or sick and pass away from old age.

However, my experience was different.  My grandpa was a healthy, happy man in his late 60s.  And, of course, like anyone who is older, he had some issues. They were merely simple problems that everyone is bound to come across in their lifetime, and he always fought through them.

Then, one of these small issues became a lot bigger.  He found himself in the hospital after only a short time because of a blood infection and a stroke.  He spent many days there and only continued to get better. The hospital expected him to be released the next day.

My grandpa never made it to that day.  He passed away in the hospital after suffering from a heart attack.

My world went numb.  I can still hear the deafening gunshots the soldiers shot off at the funeral.  Every shot louder and more painful than the last. I remember blinking frantically trying to clear my teary vision enough to see the bright red, white, and blue American Flag being folded and handed to my grandma.

I am reminded daily of the amazing person who was taken from me so quickly.  Every stuffed animal we used to play with, every grandpa playing with his granddaughter, every lamp or table scattered around my house that was built by him breaks my heart just a little more.

I constantly hoped that I would walk into his house and see him sitting there in the big, comfy chair watching the news like normal.  I wished it wasn’t true, I didn’t want to accept that he was gone. But that never happened.

Instead, I walked into the house and was met with the stuffed dog lying on the couch in place of my grandpa with the small grin on its face.  I quietly asked my grandma if I could take it home with me since my grandpa wasn’t around to love it anymore. She handed it to me and told me to keep it safe for grandpa.  I decided to name it Frank to honor him. To that day, Frank the dog has slept peacefully on my bed.

Through the years, I have learned how to move on and continue living.  I still miss him like crazy, and I wish things were different, but I know he is always with me and watching over me.  I am still trying to come to terms with the fact that I will never again be able to play cars with him or watch his eyes light up as he talks about fishing or building something new.

Regardless of the pain and suffering that came with losing my grandpa, it has changed my entire outlook on life for the better.  I will never take life for granted. Before you know it, someone you love could be gone forever.

It’s been 6 years since you were taken away from me without a goodbye.  I would do anything to go back and see you one more time and tell you that I loved you.  But this will have to do.

Goodbye Grandpa.  I love you.