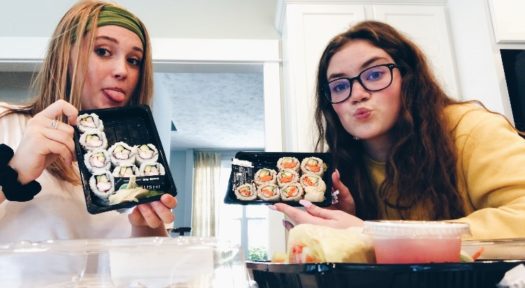 The buzz of chattering students surrounded us. We had just gotten to our third hour on a sunny Tuesday morning, and we were approaching lunchtime with our stomachs literally growling. In fact, it was kind of embarrassing. All we could think about was food. We could hear the bag of chips crinkling in the hand of the girl sitting next to us, the crunch of pretzels being eaten across the room, and the sound of a student microwaving popcorn in the corner a few rows up.

We were talking about Claire’s first time eating sushi, our stomachs growing hungrier by the second. Then it hit us. As amateur sushi eaters, we went on a mission to learn more about sushi.

After we got out of school that day, we went to D&W Fresh Market to get the Philadelphia rolls, California rolls, vegetable rolls, and spring rolls. These sushi choices were good, but they weren’t as interesting as we’d hoped. We decided to be bold, and we took a trip to Mizu Sushi where we got dragon rolls and rainbow rolls.

We found out that not all sushi is equal. Here’s a guide to sushi from most mild flavor  to the strongest.

Kaylyn: The Philadelphia roll was the first roll we tried. As we sat down at the counter in my kitchen, I realized we could have great success or only a little. Of all the rolls, this one seemed the safest. All I could see was fish and cream cheese, so I was expecting a bland taste, but when I first bit into the sushi, the taste of cream cheese overwhelmed me. I could barely tell that there was fish or cucumber in it. It just tasted like cream cheese and rice.

Claire: I was a little skeptical about how the Philadelphia roll would taste because I had never had sushi before. I sat at the counter trying to gather my bearings before eating. I had heard many bad things about sushi, which worried me. After working up the courage to try it, I realized that it wasn’t bad. It didn’t have very much flavor. It was very creamy. I am a fan of cream cheese, but the amount used in the roll was overpowering.

Kaylyn: I wasn’t expecting to like this roll. I thought it would just taste like the “healthy” option. The brown rice looked less exciting. I am not the biggest fan of vegetables, which are the main part of the roll. With my first bite came the pleasant surprise of a good taste. I loved the crunch that came with my teeth sinking into the roll. It tasted like sushi, through and through, even though it doesn’t have any fish. Quickly after, I realized just how much avocado dominated the roll. I think the creamy avocado flavor is too overwhelming compared to the crunchiness of the rest of the roll. The avocado had such a bland flavor compared to the rest of the vegetables, so it stood out a lot. Despite the avocado, I liked the roll, but because of the avocado, I don’t think I would get it again.

Claire: I thought the vegetable roll was less intimidating because of its lack of raw fish, which scares me a little. The smell of the avocado and the stickiness of the rice covering the outside of the roll paired together made for a very interesting first impression. I was excited to try it because of the big difference from the Philadelphia roll I had eaten before. After my first initial bite, I was slightly confused. There were so many different textures, and I couldn’t tell what I was eating. All of a sudden, the taste of avocado flooded my mouth. I was baffled about the odd mixture of texture and taste. This was one of my favorite rolls.

Next came the California roll containing cucumber, crab, and avocado.

Kaylyn: I had eaten California roll many times before trying this one. I knew what it would taste like, and I was excited to eat this roll. With the mindset of evaluating the sushi, I realized how much flavor and texture are a large contribution to sushi. The California roll was noticeably more crunchy and sticky than the others. I had to chew for a while before swallowing, but that didn’t really bother me. While I knew I liked them in advance, I had an interesting time deciding if the California roll is truly my favorite. I am still unsure of which is my favorite.

Claire: The California roll seemed like the most traditional type of sushi so I was really excited to try it. It was a very weird texture for me, and I couldn’t decide how I felt about it for a long time. The stickiness threw me off. It felt as if I was chewing for hours, and the roll was getting stickier by the second. I don’t know how I feel; I mean it was good but I couldn’t eat a ton of them.

The spring roll was a good middle option regarding the flavor of sushi. The spring roll has pork, carrots, bean sprouts, rice wrappers, shrimp, lettuce, and cilantro.

Kaylyn: The spring roll was unlike any of the other rolls we tried. While all the others were wrapped in the classic rice and seaweed combo, the spring roll had a rice wrapper, which is a thin, transparent sheet holding all the contents together in a longer roll. A big part of the spring roll taste was the shrimp, which is one of my favorite sea foods. I really liked this roll. There were also a lot of vegetables in the roll which gave it a good crunch. I also really like crunchiness, so this roll was one of my favorites, but still had a pretty simple taste.

Claire: As I first picked up the roll I was intrigued by the rice wrapper. It was unlike all of the other rolls we got. It had a slimy feel to it, and I was excited to see how that would affect the taste. It was so hard to decide because there was so many vegetables but there was also a large amount of fish, and they did not seem to balance out correctly. Sometimes I tasted way too much fish, but there were also times where all I could taste were the vegetables. I ultimately liked the spring roll, but the fish and vegetables could have been balanced better.

Kaylyn: When I first looked at the dragon roll, I got a little nervous. Although I am an adventurous eater, this roll is wrapped in eel and has eel sauce on top, which felt and looked a little scary to me. I could also see a lot of avocado in the roll, and I knew that was going to throw me off. When I brought the sushi to my face, I could smell the unique eel fragrance. As I shoved the sushi in my mouth, I realized the eel was actually the part I liked. The way it danced around in my mouth with the crab pleasantly surprised me. Apparently I love crab too. The flavor spread through my mouth, telling me I had no more reason to be intimidated by the scary looking roll. After a few bites, I felt like I was punched in the face with avocado flavor. Had there not been so much avocado, this roll would have been my favorite by far. The crab in the middle contributed to the amazing taste, but the avocado kind of ruined it.

Claire: As I took a bite out of the squishy roll, the intense smell and flavor of avocado and eel overloaded my senses. I am a big fan of avocado so that didn’t bother me at all. I was pleasantly content as I was taking in all of the wonderful flavors I was tasting. I love the dragon roll; it was by far my favorite. It definitely wasn’t as fishy as most of the other stuff we tried because there’s not that much fish in it. I loved this roll because it still gives the satisfaction of eating amazing sushi minus the usual large amount of fish. I was on the fence about most of the other sushi rolls, but I would definitely go back to get another dragon roll.

The most powerful flavor came from the rainbow roll. The rainbow roll comes with eight rolls of sushi. Making a rainbow roll starts with a California roll wrapped in avocado and izumi-dai. Then two rolls are wrapped in tuna, two in salmon, two in shrimp, and two in white fish.

Kaylyn: When we first opened the box of rainbow rolls, I finally understood the name. Each roll was wrapped in a bright fish and together, they looked like a rainbow. My initial thought about the rainbow roll was about how exciting the sushi seemed. While the thought of raw fish frightens some, the thought of trying something unlike anything I had ever eaten before exhilarated me. The taste did not let me down. I first tried the roll wrapped in shrimp, and I loved it. The crab provided a delightful flavor that the shrimp wonderfully complemented. I then tried the roll wrapped in white fish, which wasn’t bad, but wasn’t nearly as good as the first roll. The white fish doesn’t have as strong of a taste as the shrimp, but that was the only problem.

Claire: My first reaction when seeing the rainbow roll was that it looked like you would get diseases from it. To be completely honest, I was not excited to eat this roll at all. I was terrified. The thought of eating raw fish is a big fear of mine, and a huge portion of the flavor in this roll is the raw fish. I strategically chose one of the rolls wrapped in shrimp because it looked a lot less intimidating, and I knew that I liked shrimp. As I brought the roll closer to my mouth, the already strong smell of fish became stronger. I shoved the squishy roll into my mouth and forced myself to bite down. The thought of raw fish was all I could think about. It wasn’t my favorite but after I got past the fact that it was raw and paid attention to the taste, it wasn’t bad.

While sushi seems to be a narrow food group, it is actually somewhat broad. No matter how similar two rolls seem, they never really taste the same. Because of this, nearly everyone could find a roll perfect for them.