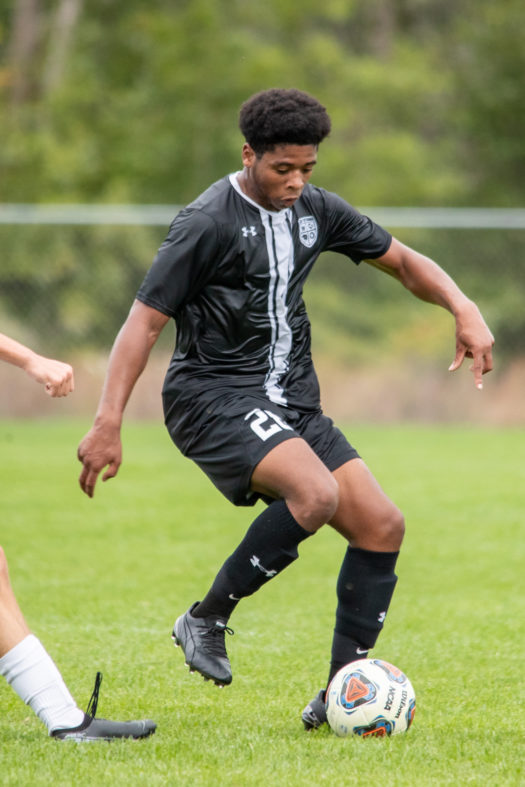 He is one of the fastest players on the West Ottawa boys soccer team. Clocking in at 18.56 mph on a new program the soccer team is using this season called PlayerTek

He is the strongest player on the team. He is only 5’11, yet he weighs 170 pounds of pure muscle never being pushed off the ball.

Sr. defender Blake Pedersen commented on how he plays with an unwavering edge. While most high school players fall to the ground and try to draw a foul, “He’s got a defender grabbing on his jersey and he plays through and still is able to control the ball and find open guys for an easy goal opportunity. He’s able to score by himself too; he has probably 15 goals and 15 assists on the year. That’s what I think makes him special. He is not only able to find ways for himself to score, but finds easy ways for other guys to score.”

Holland Christian Sr. Josiah Holiday said, “I knew how dangerous he is with the ball at his feet.”

Every team West Ottawa faced this year has been forced to pay extra attention to West Ottawa’s star player. Most teams had to adjust their formations to keep two or three players on him at all times.

Jr. defender Xaiver Chavis recalls one game this season that he had four Grandville players marking him and they even brought offensive players back to help.  “… there was a free kick up at the box and we were tied 0-0 with six minutes left… He had four defenders within arms length because they couldn’t put any guys on offense or he would score.”

Yet, these attempts to stop him with two or three players were useless according to Sr. Keeper Colton Griffin.  “…when he is being double marked or triple marked, he is able to get the ball to other players and let them score.”

He is fast. He is strong. He is the most dangerous player on the field.

This isn’t just another West Ottawa soccer player. This is Ray Mackey.

Soccer has been an important part of Mackey’s life for as long as he remembers. His love for soccer started at a very young age and has continued to grow. Mackey revealed that the birthplace of his love for soccer developed in a different place than any of his teammates.

Mackey said, “When I was in second grade, I lived in Ghana for about a year and we just kept going back there. We would go out during the night and play soccer. In Ghana, we would just play in the streets and gravel too. So, it’s been a big part of my life.”

Through living in Ghana, Ray developed the skills he possesses today. However, Ray’s work ethic and commitment to the sport is what has brought him from the streets of Ghana to possibly playing at the professional level.

A Mid City Coach from Minnesota first recognized this work ethic and commitment, along with his superior skills, and allowed him the opportunity to train in Europe. Ray played in Herzogenaurach, Germany for 14 days and Manchester, England for another 14 days this past summer.

Mackey said, “I went to get better and experience the quality of play. It was very intense and I got a lot better playing there. It made me smarter as a player and put me in my peak shape.”

After his training and development as a player in Manchester, Ray received an offer from the University of Chester to play in Chester, England. If he decides to play for Chester, Ray would be playing against academies from Manchester City and Liverpool.

While most of Ray’s teammates are hoping to receive an offer from a Division II or III schools in the United States, Ray is being recruited across the world.

His training in both Ghana and Europe makes him the most diversely trained player to come through the West Ottawa soccer program. This gives him a significant advantage because he has received a wide variety of coaching tips and feedback.

His training abroad has significantly influenced him as a player. Yet, his practice and discipline every day is what causes his skill to constantly improve.

“I practice twice a day for club and then once a day just technical training for an hour with my dad,” Ray said.

By committing himself to hours of practice each day, Ray has become one of the most skilled soccer players to pass through the West Ottawa soccer program.

One of Ray’s teammates commented on how his skills as a soccer player affect the teams’ success.

These skills his teammates describe barely scratch the surface of the many aspects Ray brings. It is through Ray’s “drive”, “talented feet”, and ability to “open up opportunities” for his teammates that propel his team to a whole other level allowing West Ottawa to compete for a district title.

Ray’s ball skills are not the only element Ray brings to the team. Ray’s leadership is really what stands out about him. During games and practices, he is constantly pushing his teammates to do their best.

Nguyen said, “Actually this year, his leadership has grown quite a bit. He knows his ability and he knows what kind of presence he’s established on the practice field. He was on varsity as a sophomore and he likes to joke around, he likes to goof off, but this year since it’s his senior year, he’s realized that he needs to be not that goofy. He likes to have fun, but yet when we are ready to do business, he is ready to lead and push through and I really appreciate that leadership from him.”

The increase in his leadership has a lot to do with his desire to win. Great leaders are competitive. Being a leader is not always easy, but good leaders like Ray step into leadership positions because they want the team to succeed.

Will Mackey, Ray’s brother and teammate,  describes that this year Ray’s competitiveness has elevated to another level. “He used to be kind of shy. He was always a really good player, but was shy on the ball. Then, he came back from Europe and he was just insane and that’s when he would not lose no matter what it took.”

This burning desire to win no matter what paid off. In West Ottawa’s game mid-season against East Kentwood. West Ottawa was down 2-1. There was less than a minute left. The ball hit off one of East Kentwood players and rolled past the goal line. West Ottawa corner kick. They had only one chance to tie the game.

Griffin described the scene, “We all got into the box and Ray was hyping everyone up and making sure that we were intense and we were really wanting the ball off a corner kick. The ball came in and Ray hopped over every defender and the goalie, got a head on it and scored to tie the game up. He gave everything he had to get the team going instead of giving up.”

Soccer fans gathered on the sideline may not even realize how lucky West Ottawa is to have Ray on their team. Ray lives in Grand Haven and still attends West Ottawa. If Ray was a Buccaneer, West Ottawa’s soccer season may have gone in a completely different direction.

Ray is currently unsure about his plans after high school. But he knows he does not want Tuesday’s 5:00 district semifinal game against Grand Rapids Union to be his last as a Panther.