Should WO return to the block schedule? 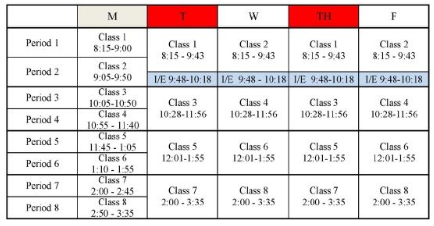 Many are surprised to learn that in 1995, West Ottawa operated on the block schedule, also known as the “Cadillac of schedules.” It is a luxury that comes with a high price tag, but allows both teachers and students more time to dig into a lesson and process the information.

With a block schedule, classes are 90 minutes and students attend four of their subjects one day, and the other three the next day, still learning the same material but throughout longer, spaced out periods. Twice a week, there is an hour long seminar, and once a week, a “speed day” where students attend all 7 classes.

Though expensive, the block schedule is a great structure with only a few drawbacks.

The block schedule offers teachers the opportunity to develop their lesson plans by implementing more creative projects and interactive activities. These are necessary to keep students interested for the whole 90 minutes of class.

Instructor Larry DeLeon, a social studies teacher at WO, noted that “You had to have at least 2 or 3 activities [per class period]. So as a teacher, it forced me to be creative and come up with new ideas.” DeLeon explained that, “In American Government, I would do a lot of simulations. A mock senate, mock presidential election, and a mock Supreme Court trial. It was easier because we had more time in a class period and did not have to worry about being interrupted by the dismissal bell.”

Instructor Shanna Meyer taught math during the block schedule and admitted that it was challenging to fill the time, but satisfying to be able to “actually see an entire lesson all the way through with practice problems, investigations, and explorations.” She explained that, “You had a better flow in the class without interruption.”

For some students though, long hours can be less than exciting. Administrator Kristine Jernigan, who was a student during WO’s block schedule, remembered long lessons in English, math, and social studies being “tiresome.” However, she made an exception for art, gym, music, and science labs “which were nice because you could really get a lot done.”

Nonetheless, having so much time to focus on a single subject helps students retain the information better: “I think it’s much less stress on your brain, allowing for mental breakthroughs on a math concept or finding a writing groove because you have 1 ½ hours to learn rather than 50 minutes,” Annika Barber, a student at Black River High School, said.

Getting into a flow in the classroom is when productivity is born. With an additional 40 minutes of class time, students are more productive. Recalling her experience with standard scheduling, Barber said, “By the time everyone gets settled there is about 20-30 minutes before it’s time to pack up, whereas blocks allow for a solid hour or so of productive work.”

Not only does productivity seem to thrive in the classroom, but at home. Only having homework from three or four classes each night is reasonable, allowing students to actually spend time studying instead of scrambling to finish assignments from all six classes. “It was less intimidating on your mind; you didn’t have six or seven classes of homework every night,” said Meyer.

Lauren Sweeney, who transferred from WO to Black River, noted that with a block schedule, “Homework was easier to complete and turn in as well, because we often had two or three days to do each homework assignment.”

The extra days to finish homework helps with time management: “[Block schedules] did help me prioritize. Those nights when you guys stay up late doing all of your homework, I was like ‘phew, math homework isn’t due for two days,’” Jernigan said.

Block schedules better prepare students for college because of the similarly long hours and irregular schedule. It’s important for students to learn how to sit through long class periods and prioritize homework when they don’t go to all of their classes every day. “I was used to having a college schedule before I even started college,” Sweeney explained. “I think all schools should make the switch to block schedules to help their students get out of the monotony of middle and high school.”

Making the switch from six classes every day to a college’s irregular schedule is not easy. Students are better prepared for college when they get the chance to experience a college-styled schedule in high school. “Standard scheduling doesn’t seem to represent the college lifestyle and I think it’ll be harder for students with standard scheduling to get used to the longer classes and having different classes each day,” Barber said.

However, the block schedule is not all perfect. One of the major issues from a teacher’s perspective was the loss of accountability with their students. Only having class every other day, teachers don’t get the opportunity to talk to their students regularly and remind them of assignments. “What I found was that sometimes it made it harder for the students to get things done because I couldn’t remind them on a daily basis,” explained Stoel. “We’re reading Hamlet, so instead of ‘wait, what was going on in the play?’ We now have that continuity [with a standard schedule] that they can easily recall what happened the day before.” Jernigan agreed with this concept: “The consistency of a normal schedule is beneficial.”

Because of this, absences have the potential to be especially problematic: “If the student misses Monday, you don’t see them until Wednesday, so you lose accountability,” DeLeon said. Most teachers agreed. Meyer noted that “It was really hard when the student was absent. It was hard to catch people up. But, the hour of seminar was really helpful for that.”

Now that we have Chromebooks, this would change. Communication is improved, making these issues less severe.

From a student’s perspective, absences do not have the same effect: “It was much easier to attend full school days because every day felt different and it was a lot less monotonous. Also, if you were ever tardy for class it wasn’t a very big deal because classes were 90 minutes long, so only a very small percentage of the class was missed,” Sweeney said.

The block schedule is now just an interesting part of WO history, but should WO bring it back? One indisputable factor is the high price. Block schedules require more teachers, thus staffing becomes more expensive for the district. But overall, there are considerable benefits of the block schedule: lesson plans are improved, homework is more manageable, students are more prepared for college.

However, the local reviews are still mixed. Stoel sums up the consensus well, saying, “The benefits were extended time. We could get more in depth, and actually finish a video. But in terms of the drawbacks? Not seeing students on a daily basis.”