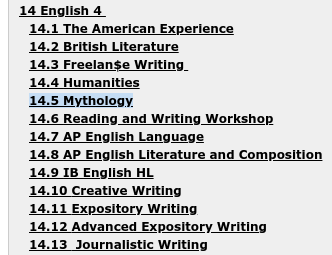 As December rolled around, scheduling for next year already began. I stared blankly at the course guide. I couldn’t decide what English class to take. British Literature was a possibility, so was American Experience. Then mythology caught my attention. “Why not?” I thought. Something different never hurts.

I wasn’t thinking about how the class would benefit me when I signed up, but after talking to some of the mythology teachers, I realized all the different things I could learn from the class.

Instructor Angela McKellar focused on how mythology could be used to understand how own our society came to be. “It’s important because it teaches us about other cultures’ histories and tells us how societies were in the past. It also shows how beliefs build who we are and how beliefs are the foundation to society,” McKellar said.

Instructor Kristen Bentley focused on how mythology connects lots of subjects together. ”Learning mythology lets us see how we are all connected – no matter what time and place we live, we all have common experiences and stories. It gives us the opportunity to see how literature has changed and hasn’t changed over time. We’re still telling the same stories: romances, hero’s tales, and more. Mythology also brings together several subjects, from literature and history to government, psychology, and sociology,” Bentley said.

Kirkendall also mentioned that some topics discussed in mythology are still relevant today. “Hercules’ greatest achievement, the Twelve Labors, was an act of atonement for murdering his wife and children, while Medusa was a rape victim who was blamed for her own assault and cursed with a grotesque appearance. Is he really a hero? Is she really a villain?”

After hearing the teachers’ views, I changed my own on mythology. Mythology is as valuable as any other English class. Next year in mythology, I’m sure I’ll hear many stories that will help deepen my understanding of other subjects and of society.